by Mrinalini Erkenswick Watsa on 22 October 2013

In 2004, the first-ever Global Amphibian Assessment (GAA) reviewed all 5,743 amphibian species known to science and concluded that 32% were threatened with extinction – a number far exceeding corresponding figures for birds and mammals (12 to 23% respectively). In addition to the usual culprits of climate change and habitat destruction, a startling 92.5% of amphibians listed as Critically Endangered were found to be undergoing enigmatic declines linked to an unexpected perpetrator – the chytrid fungus, Batrachochytrium dendrobatidis (Bd).

Given the chilling ability of Bd to decimate populations within the span of days or weeks, most studies of the pathogen have predictably focused on improving early detection strategies, identifying treatments, and facilitating captive breeding programs. However, in some areas, scientists have discovered that Bd does not infect all amphibians, and it is not yet clear which factors allow Bd to successfully infect a host. In fact, most research has systematically ignored sites that do not contain Bd-infected amphibian species. As a result, the natural ecology of the pathogen itself remains poorly understood.

Alex Strauss and Kevin G. Smith of the Tyson Research Center at Washington University in St. Louis decided to take a novel approach to the study of Bd. Their new study in the open-access journal PLoS ONE suggests that scientists need to peer beyond infected amphibians, and take a broader look at other factors that might affect Bd. This is based on their discovery that the prevalence of Bd in a given environment is more closely correlated with the invertebrate community coexisting with the amphibian hosts than it is with the amphibians themselves.

“I started thinking about how every organism, even a pathogen, is interacting with many other factors,” Smith told mongabay.com. “For a long time we have been focusing on Bd alone, or Bd with amphibians. Maybe we need to think about all the other factors that Bd has been interacting with that have been overlooked for the most part.”

In particular, Strauss and Smith were keen to investigate why Bd does not occur in all amphibian populations in a localized region, where climatic considerations such as temperature and precipitation are relatively consistent.

The fungus has been found in amphibians (frogs and salamanders) across six continents, in samples collected as long ago as 1938. It can infect the mouthparts of larvae or the keratin in the skin of adult amphibians. Bd appears to prevent electrolytes from naturally crossing amphibian skin, resulting in acute electrolyte imbalances that eventually stop the animal’s heart. To look at natural distributions of Bd, Strauss and Smith needed a special study site where amphibian species were infected with Bd, but not rapidly dying. 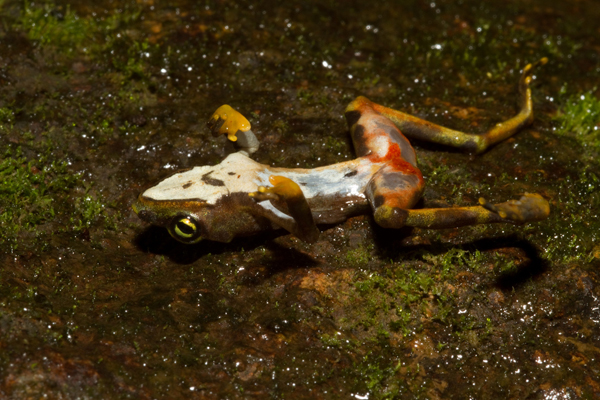 In east-central Missouri, they found just that: here, Bd and the resident amphibians appear to have reached an evolutionary stalemate. Although infected with the disease, amphibians have evolved to tolerate its presence. One likely explanation for this is that Bd is not a novel infection in this region, so amphibian populations have had time to adjust to its presence. In fact, what scientists observe in Missouri today could be the offspring of resilient species that survived Bd infection long ago.

Strauss and Smith conducted intensive aquatic surveys on 29 similar ponds from nine different areas in Missouri where Bd was present. They measured abiotic (i.e. non-living) variables, such as water temperature, distance to the nearest neighboring pond (a metric for pond isolation), as well as the chemical composition and characteristics of pond water. They also collected data on the diversity and abundance of amphibians, macroinvertebrates (organisms visible with the naked eye that are lacking a vertebral column or spine), and zooplankton species in each pond.

They reported no larvae with deformed mouthparts and no evidence of Bd-related mortality in the amphibians at this site even though Bd was present in 30 to 50% of the ponds evaluated. But Strauss and Smith found that neither the identity of amphibian species in the host community, nor any specific abiotic factor, could be linked to the likelihood of Bd presence in a pond.

“This result suggests that changes in amphibian diversity and abundance among our study sites were apparently unimportant in determining whether we detected Bd in amphibians in a given pond,” conclude the authors.

Instead, they discovered that ponds with Bd were more similar to each other than one would expect based on chance. In particular, ponds with Bd-infected amphibians housed extremely similar communities of macroinvertebrates, an unusual finding given that Bd is thought to be almost exclusively specific to amphibians.

“The interactions among invertebrates and Bd have generally been ignored and are presumably considered to be less important than well-studied factors such as water temperature and amphibian density,” the authors wrote in the paper.
“The way we interpret that,” said Smith to mongabay.com, “is that there is something about certain invertebrate communities that make them more likely to have Bd in them.”

The authors suggest that macroinvertebrates could impact Bd presence in two ways. First, macroinvertebrates may prey on Bd, decreasing the likelihood of frog infection. Second, macroinvertebrates themselves could be infected with Bd as alternative hosts or reservoirs for the pathogen. The latter idea is supported by a 2012 discovery by researchers at the University of South Florida, which found that crayfish (Procambarus species and Orconectis virilis) can carry Bd infections in their gastrointestinal tracts, effectively becoming the first known non-amphibian hosts for the fungus. 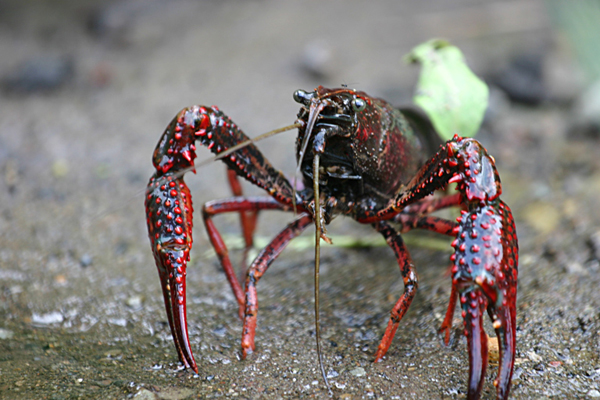 Procambarus clarkiii, a member of a genus of crayfish identified as the first non-amphibian hosts for Batrachochytrium dendrobatidis infection. Photo by: Mike Murphy, Wikimedia Commons

“When we study Lyme disease we don’t just study [it] in people, ” Smith explains. “We know that there are a lot of other factors that matter. We tend to think of pathogens as being something that infects people or animals and that’s the end of the relationship. But I think the way to look at it is that they are just one species interacting with many may other species, and understanding more of those interactions can only benefit our understanding of the pathogens themselves.”

Batrachochytrium dendrobatidis continues to be a major threat to amphibian populations worldwide, compounding the effects of climate change and habitat destruction. Research such as that of Strauss and Smith’s suggests it is no longer wise to view Bd in isolation from other factors. Further investigation into the natural ecology of Bd could be the next important step in protecting native amphibian populations.

(09/19/2013) A frightening disease has been ravaging amphibians across the planet. At least 350 species have been infected, two hundred of which have suffered massive population reductions or extinctions, some even occurring within the space of weeks. In 1999, a single fungal species called Batrachochytrium dendrobatidis (Bd), commonly known as the chytrid fungus, was identified as the causative agent for these rapid die-offs.

(07/02/2013) Somewhere in the wet pine forests of Chile, a male frog is gulping-up a bunch of eggs. No he’s not eating them, he’s just being a good dad. Darwin’s frogs are known for their unique parenting-style: tadpoles are incubated in the vocal sac of the father. First recorded by Charles Darwin during his world famous voyage aboard the Beagle, the amphibians were common in the native Chilean pine forests until the last few decades. Now, scientists believe that one of the two species, the northern Darwin’s frog (Rhinoderma rufum), may have vanished for good. And the other is hanging on by a thread.