The world’s largest palm oil trader is continuing to traffic in palm oil linked to deforestation and illegal peatlands conversion, alleges a new report from Greenpeace.

The report, titled A LICENSE TO KILL: how deforestation for palm oil is driving Sumatran tigers toward extinction, documents Singapore-based Wilmar International trading with several companies linked to “illegal forest clearance and fires on peatland”. It says consumer products companies that buy from Wilmar — Mondelez International, Neste Oil, and Procter & Gamble to name a handful — are therefore at risk of being complicit in the destruction of key tiger habitat, including Tesso Nilo National Park, which has been illegally planted with oil palm.

“Many people don’t realize there’s palm oil in all kinds of everyday products – from cookies to shampoo. So how would they know that Oreo cookies or Gillette shaving gel are actually linked to rainforest destruction?” said Amy Moas, Greenpeace Senior Forest Campaigner, in a statement. “We have evidence that palm oil supplier Wilmar International, which sells to these household brands, sources from companies who are complicit in the destruction of tiger habitat.” 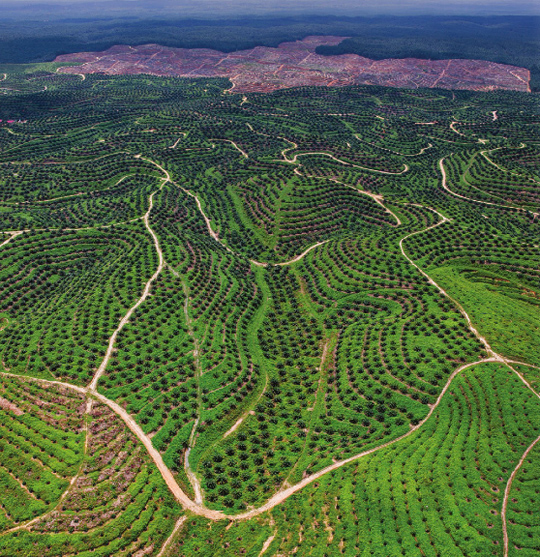 Greenpeace is calling upon Wilmar to adopt a “zero deforestation” policy that applies not only to its own plantations, but its supplier plantations, which account for 96 percent of the palm oil Wilmar trades and refines. The demand, which is modeled after a 2011 commitment made by Golden Agri Resources, Indonesia’s largest palm oil producer, is a tall order for Wilmar given the sprawling extent of its operations: the company accounts for one-third of the global palm oil processing market. But Greenpeace says Wilmar’s scale provides a big opportunity to transform the entire palm oil sector.

“As the world’s biggest player in the palm oil sector, Wilmar has the power to transform the industry,” said Moas. “Wilmar needs to commit to a no-deforestation policy, so that U.S. companies can be sure that they’re not contributing to rainforest destruction or the death of tigers in Indonesia.”

For its part, Wilmar says it has a sourcing policy that “guides” it in purchasing decisions. 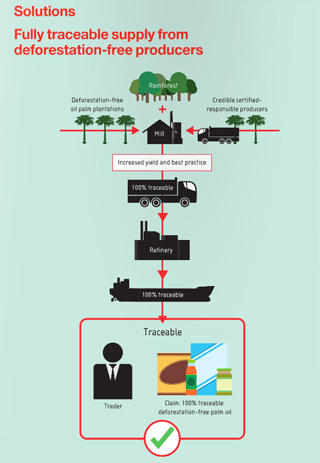 “The policy clearly states, amongst other points, that Wilmar commits to buying palm oil that is produced from plantations and mills that comply with all relevant and applicable local and national laws and regulations,” the company told mongabay.com via email. “We are currently reviewing our business practices, including our sourcing policy, working with certain international supply chain experts.”

Wilmar added that it has been in talks with Greenpeace about palm oil sustainability issues and was “disappointed” the activist group went forward with the report before it could complete the review of its sourcing policies.

“We are therefore deeply disappointed that despite our efforts at genuine dialogue and engagement with Greenpeace,” Wilmar said in a written statement. “Nonetheless, we remain undaunted and will continue to focus on strengthening our business policies and practices, as we believe our efforts will see progress in advancing sustainability within the industry.”

Greenpeace’s report comes in the run-up to the Roundtable on Sustainable Palm Oil’s annual meeting, which this year is taking place in Sumatra. The meeting of the multistakeholder-body promises to be a contentious one in the aftermath of this past June’s severe haze, which researchers linked in part to fires set to open up land for new oil palm plantations. Several RSPO members are also threatening to drop out of the initiative due to stricter environmental standards put in place at last year’s meeting.

Over the past decade palm oil has emerged as one of the biggest drivers of deforestation in Southeast Asia, including the largest cause of forest loss in Indonesia between 2009 and 2011, according to Greenpeace. The crop is now rapidly expanding in Central Africa and Latin America, raising fears that it could drive deforestation in those regions as well.

Palm oil is used in a wide range of processed foods owning to its low cost relative to other vegetable oils. It is also used in cosmetics, for industrial purposes, and as a feedstock for biodiesel production.