On Saturday, the Norwegian Government Pension Fund Global (GPFG) — the world’s largest sovereign wealth fund — announced it has sold stakes in WTK Holdings Berhad and Ta Ann Holdings Berhad, Malaysian companies with extensive logging operations and timber plantations. The decision is based on recommendations from the fund’s Council on Ethics, which conducted an investigation that found “unacceptable risk” of large-scale forest destruction, non-compliance with environmental laws, and poor forest management practices.

In the case of WTK, the Council found evidence of logging in breach of regulations outside concession boundaries, in buffer zones along river banks and roads, and on steep slopes. It added that destructive WTK logging operations inside primary forests in the ‘Heart of Borneo’ may have contributed to the log-jam disaster that made international headlines in 2010 when a 50 kilometer stretch of the Rajang river in Sarawak was blocked by logs.

“The Council finds that WTK does little to reduce the environmental damage associated with its forest operations,” said a report from the Council.

For Ta Ann, the Council documented instances of egregious forest destruction in the ‘Heart of Borneo’, including re-entry logging without required Environmental Impact Assessments. It said that Ta Ann’s measures to limit environmental damage — which include a now-expired partnership with WWF — are falling short.

“Given that the conversion of tropical forests involves the complete, irreversible alteration of affected ecosystems, the scale of the deforestation, and that these operations are being pursued in areas with a particularly rich biodiversity as regards species, habitats and ecosystems, the Council has concluded that the measures implemented by Ta Ann to mitigate the adverse effects are insufficient to secure a material reduction in the risk of severe environmental damage now and in the future.” 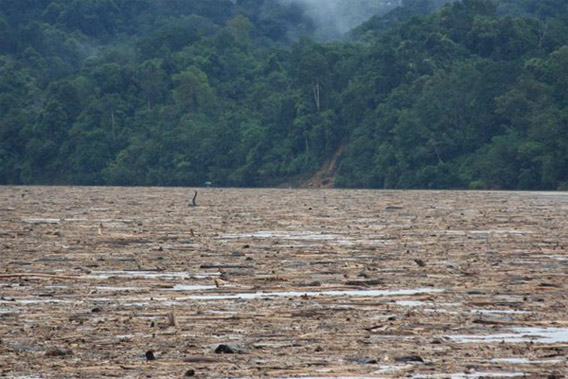 Since 2009 Norway has been world’s largest financial supporter of rainforest conservation, pledging 3 billion krone per year ($522 million) to the cause. Its sovereign wealth fund — a product of the country’s oil revenue — is independent of that commitment, which falls under its foreign aid budget.

Norway’s largess is part of its efforts to slow climate change. Deforestation accounts for roughly ten percent of global carbon emissions from human activities. It is also one of the leading threats to many charismatic animal species, including orangutans, Asian rhinos, and the Sumatran tiger.

Note: the original version of this article noted Ta Ann’s “partnership with WWF”. However this partnership expired in July 2012, as noted by WWF in an email to Mongabay.com: “This participation agreement had a limited scope related specifically to supply chain management within the mills, including a commitment to increase proportion of timber purchased from known and credibly certified sources and establishing traceability. The GFTN Participation Agreement did not include Ta Ann’s forest concessions. After a series of internal reviews showing that the company had not demonstrated adequate progress against its participation agreement and did not meet the criteria under GFTN’s new Participation Rules, WWF decided not to renew the participation agreement in December 2012.” We have therefore added “now-expired” to the sentence in question.

(06/12/2013) The Norwegian Parliament has called for the country’s pension fund to strengthen its commitment to avoid investing in companies linked to rainforest destruction.

(03/11/2013) Norway’s $700 billion pension fund continues to divest from companies linked to tropical deforestation, selling stakes in 23 palm oil producers last year, reports Rainforest Foundation Norway, an activist group that has led the campaign for divestment. The move by the Norwegian Government Pension Fund Global (GPFG) — the world’s largest sovereign wealth fund — came after it revised its investment guidelines to include deforestation as a portfolio risk.

WWF to investigate program that partners with notorious loggers

(08/14/2011) The World Wide Fund for Nature (WWF) has announced an independent review of its Global Forest and Trade Network (GFTN) following a report from Global Witness that criticized the conservation organization for working with a number of logging companies that destroy forests, imperil species, and abuse human rights. While WWF’s GTFN is meant to support companies in changing their ways, Global Witness’ report argued that it led to greenwashing forest destruction, including illegal logging.

(07/25/2011) Arguably the globe’s most well-known conservation organization, the World Wide Fund for Nature (WWF), has been facilitating illegal logging, vast deforestation, and human rights abuses by pairing up with notorious logging companies in a flagging effort to convert them to greener practices, alleges a new report by Global Witness. Through its program, the Global Forest and Trade Network (GFTN), WWF—known as World Wildlife Fund in the US and Canada—has become entangled with some dubious companies, including one that is imperiling orangutans in Borneo and another which has been accused of human rights abuses in the Congo rainforest. Even with such infractions, these companies are still able to tout connections to WWF and use its popular panda logo. The Global Witness report, entitled Pandering to the Loggers, calls for WWF to make large-scale changes in order to save the credibility of its corporate program.