In a world first, scientists have captured images and video of a boa constrictor attacking and devouring whole a femle howler monkey, one of the largest new world primates weighing in at around 4 kilograms (8.8 pounds). The rare predation event was recorded in a tiny forest fragment (2.5 hectares) in the Brazilian state of Rondonia by Erika Patricia Quintino, a PhD student at the Pontifical Catholic University of Rio Grande do Sul.

“Among New World primates, reports of snake predation are limited to medium- and small-bodied species. Here, we report the first documented case of successful predation of an atelid by a snake—an adult female Puru’s red howler monkey, Alouatta puruensis, that was subdued by a 2-m-long Boa constrictor,” Quintino and her advisor, Julio Cesar Bicca Marques, write in the journal Primates.

Howler monkeys are communal animals, often living in groups of over a dozen. The female in question was a member of a group of six individuals. When she was attacked, the researchers note that another female howler monkey in the group “ran toward the snake, also vocalizing, and hit it with her hands several times, but the snake did not react and she moved off to a nearby tree from where she watched most of the interaction.”

Although the initial attack was lightning-quick, the boa hiding in the tree canopy and striking, the whole event too over an hour.

“The boa applied the species’ typical hunting behavior of striking and immediately coiling around its prey and then killing it through constriction (probably in less than 5 min), but the entire restraint period lasted 38 min,” the researchers write, adding grimly, “The howler was swallowed head-first in 76 min.” 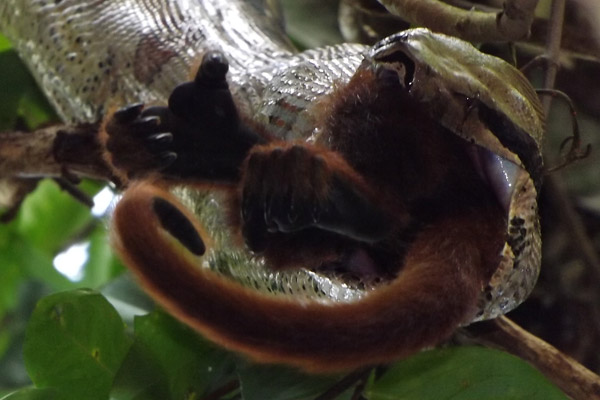 The rare observation—and resulting images and video—is important because it means not only that boa constrictors are capable of killing such large monkeys, but also that they may play a larger predatory role with howlers and other primates than expected. In addition, as the Amazon rainforest is sliced into fragments in many parts of Brazil—such as Rodonia—the researchers write that this may give boa constrictors an advantage over primates, potentially threatening small populations surviving in fragments.

“The sit-and-wait hunting strategy of a boa (where it may remain in the same spot for a few days or even a month may be particularly profitable in small forest fragments due to the fact that monkeys repeatedly use the same routes to travel between feeding sites,” the researchers conclude.

Cattle ranching, expansive soy farms, and urban development has fragmented the Amazon rainforest in many parts of Brazil, leaving pockets of forest that are more prone to wind damage, fires, and biodiversity loss. 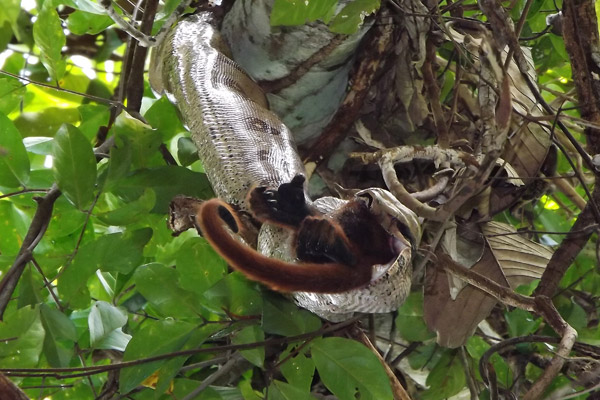 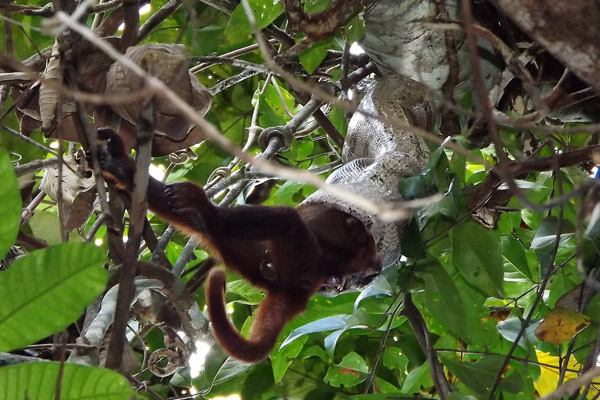 (07/25/2013) A new study published in Biology Letters finds that contrary to popular opinion, cheetah don’t overheat during hunts. But their body temperature rises after successful hunts due to stress than another predator may seize their prey.