Russians drop armed guards on to the deck and round up the crew of the Arctic Sunrise, which is protesting against Gazprom drilling

According to the last communications from the Arctic Sunrise before all contact was cut at around 4.30pm BST, the Russians dropped guards on to the deck of the vessel by rope from a helicopter, rounded up the Greenpeace crew and broke into the wheel house and communications rooms.

Tweets from three people who locked themselves into a secure area on the ship said: “This is pretty terrifying. Loud banging. Screaming in Russian. They’re still trying to kick in the door”. Another said: “Crew are sitting on their knees on the helipad with guns pointed at them.” 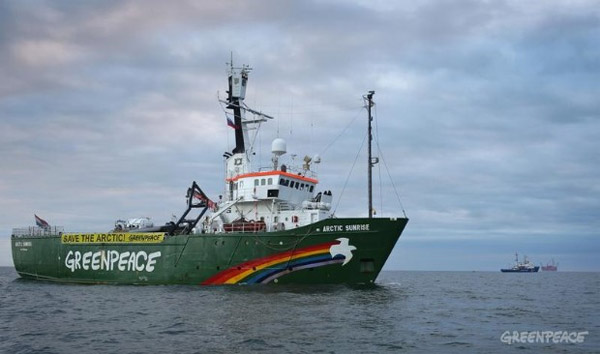 Frank Hewetson, British action coordinator on the vessel, later said that 29 of the crew were being held under armed guard in the canteen.

“About 10 commandoes boarded by a soviet era helicopter. They pushed us aside and ordered us to lie flat out on the deck. They then smashed their way onto the bridge.

“Our engines have been turned off and they have isolated the captain Pete Wilcox. We have no idea what is happening.”

The crew includes six British people as well as 10 other nationalities. No one has been reported injured.

The dramatic moves 60km north of the Russian coast near the island of Nova Zemlya, was described by Greenpeace executives in London as “an illegal act in international waters”.

“We have a right to be there. This was an entirely peaceful protest,” said Arctic campaigner Ben Ayliffe.

But Russian diplomats accused the environmental group of “aggressive and provocative” actions this week after shots were fired by Russian coastguard and two activists from the Arctic Sunrise were arrested on Wednesday after scaling the Gazprom-owned Prirazlomnaya platform which is drilling for oil in the area. The activists have been detained on the Russian coastguard ship Ladoga.

“The intruders’ actions … had the outward signs of extremist activity that can lead to people’s death and other grave consequences,” the Russian foreign ministry said in a statement.

According to Reuters, Russia summoned the Dutch ambassador asking him to ensure it was not repeated. The Arctic Sunrise is registered in Holland.

Gazprom plans to start production from the Prirazlomnaya platform next year 2014, according to Greenpeace, raising the risk of an oil spill in an area that contains three nature reserves protected by Russian law.

Greenpeace International executive director Kumi Naidoo said: “This illegal boarding of a peaceful protest ship highlights the extreme lengths that the Russian government will go to keep Gazprom’s dangerous Arctic drilling away from public scrutiny. We ask President Putin to restrain the Coast Guard and order them to holster their guns and withdraw. We are a peaceful organization and our protest has done nothing to warrant this level of aggression.”

Figures released this week suggest that the extent of Arctic sea ice has shrunk to its sixth lowest level on record, prompting scientists to warn that manmade climate change was bringing the days of an ice-free Arctic closer.