Deforestation for an oil palm plantation in Central Kalimantan in 2013. Photo by Rhett A. Butler..

Reclassifying logging concessions as permanent forest estates and thereby barring them from conversion to industrial plantations would be an effective strategy for helping conserve Indonesia’s fast-dwindling forests, argues a new study published in PLoS ONE.

The study, which involved an international team of researchers led by David Gaveau of the Center for International Forestry Research (CIFOR), analyzed forest loss in areas zoned for different uses in Indonesian Borneo. It found that deforestation rates in timber concessions and protected areas were “not significantly different” provided logging concessions were not reclassified as industrial plantation concessions. The results suggest that designating existing logging concessions as permanent forest estates to prevent their conversion to oil palm plantations could generate substantial conservation benefits in Indonesia, according to the authors.

“Our study indicates the desirability of the Government of Indonesia designating its natural forest timber concessions as protected areas under the IUCN Protected Area Category VI, because they perform as effectively as protected areas in maintaining forest cover and should be protected from reclassification,” the researchers write.

That would effectively put two-thirds of Kalimantan’s remaining forest cover under some form of protection. Meanwhile those logging concessions would still generate revenue for local communities, companies, and the state, offering a strong financial incentive for maintaining them, according to the paper. That incentive is currently missing in many Indonesian protected areas, which suffer from high rates of encroachment, illegal logging, fire, and deforestation due to inadequate levels of funding. 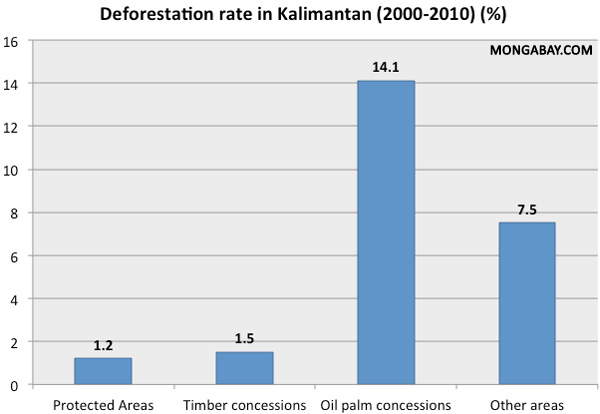 Although they note the shortcomings of underfunded parks, the researchers do not call for converting protected areas to logging concessions. Instead they view existing logging concessions as a potentially inexpensive opportunity for augmenting conservation areas. Indeed, while selectively logged forests have lower levels of biodiversity and are more susceptible to drought and fire than old-growth forests, they have far higher conservation value and store vastly more carbon than oil palm plantations, which other biologists have likened to biological deserts.

“Logged forests can still be extremely valuable habitats for orangutans and other species,” write the authors, who include three prominent orangutan conservationists. “The creation of the 5,686 sq km Sebangau National Park in 2004, an area logged throughout the 1990s, but containing the largest contiguous orangutan population on Borneo, indicates that Government of Indonesia is beginning to recognize the value of logged forests for biodiversity conservation.” 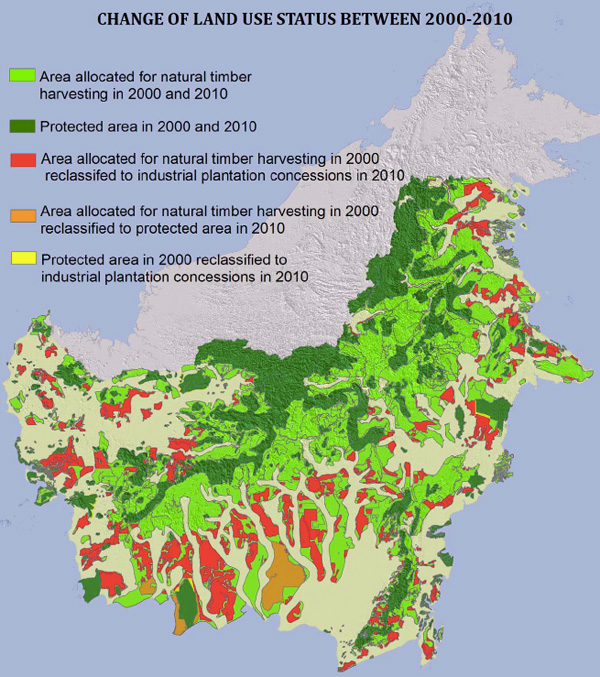 Indonesia currently has a moratorium on granting new logging permits in old-growth forests. That moratorium was a product of Norway’s billion dollar grant to reduce deforestation in the country.

Indonesia has one of the highest deforestation rates in the world. Between 2009 and 2011 it lost an average of 620,000 hectares of forest per year, or more than a third higher what the Brazilian Amazon lost last year.