In October last year, an astounding mass hunting came to light—an estimated 120,000–140,000 Amur falcons were being hunted and killed in Nagaland, India, every year.

A small bird of prey, the Amur falcon (Falco amurensis) records one of the longest migrations among all birds—a staggering 22,000 km annually. Their journey starts in China and Siberia where they breed and spend their summers. From there they fly to Northeast India and Bangladesh to ‘fatten up’ for their eventual marathon-flight over the Indian Ocean to reach Africa: a 2-3 day non-stop flight covering over 3,000 km over the sea.

It is during their passage over Northeast India that the migrating falcons stop over at the Doyang Hydroproject reservoir in Nagaland and roost in colossal numbers. Here, hunters mass-trap the birds using large nets erected vertically around the roosting area. 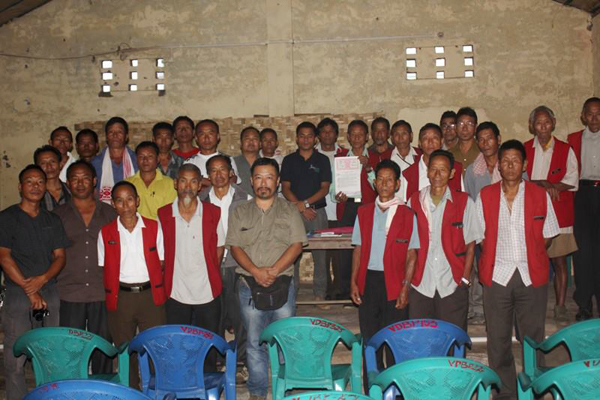 Village council members of Pangti Ashaa and Sungro with WTI and Natural Nagas members after the signing of the MOU for the conservation of the Amur Falcons. Photo courtesy of Steve Odyuo.

This mass-killing was first reported by Nagaland Wildlife and Biodiversity Conservation Trust (NWBCT), an NGO based in Dimapur, Nagaland, and Conservation India (CI)—an online portal to enable conservation action. Extensively covered by media (including mongabay.com) last year, the news of the falcon-massacre triggered a huge international outcry. But more importantly, it has set off responses that conservationists hope mark the beginning to the end of this massacre.

“It is our duty to protect these wonderful birds while they pass through Nagaland, and to treat them as our honored and esteemed guests, in the true Naga tradition of hospitality,” said Chief Minister of Nagaland in a message of support. “I appeal to all the people of Nagaland, particularly the people of Wokha and Mokokchung districts, where the birds used to take some rest during their long journey, to end the killings of these lovely birds.”

The campaign aims to protect the falcons through improved patrolling and enforcement, involvement of the local community, as well as a comprehensive conservation education program.

In an attempt to educate the teachers and children of the villages where these falcons visit, the team conducted a 4-day “Under the Canopy ‘training the trainer’ program” between August 27 and 30th.

“This was very well received by the 20 teachers our team had recruited and really opened their minds. They realized that there is so much more to these falcons than cheap meat,” says Ramki Sreenivasan, co-founder of CI.

The teachers are now creating EcoClubs with 20 to 25 children in each of the three of the most affected villages—Doyang, Sungro and Pangti—to teach the children about various aspects of the falcons when they migrate to these areas. 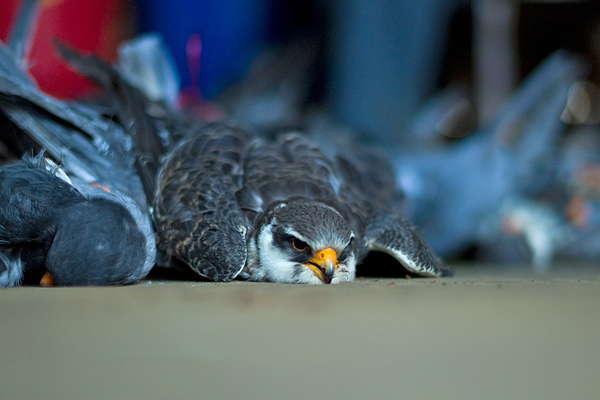 “As the bulk of Nagaland’s forests fall in community owned areas, a widespread, focused nature education initiative is critical for various stakeholder groups like the Church, schools, markets and villages,” says Sreenivasan. “From our experience over the last several years in Nagaland, school going children are important influencers in their households, village, and eventually, the community.”

The departments of Forests, Ecology, Environment and Wildlife plan to step up vigilance during the winter to prevent any hunting, and the Deputy Commissioner, the administrative head of the district, will issue a ban on hunting of falcons, as was done last year following complaint registered by CI and NWBCT, according to Sreenivasan.

“We are in touch with the community members of the villages for instant updates daily. The forest department has also stepped up patrolling,” says Sreenivasan.

Further, the team intends to take up a scientific study of the falcons to better understand critical aspects of their ecology such as their migratory routes and harvesting pressures. To achieve this, Shashank Dalvi, a wildlife biologist with Centre for Wildlife Studies, Bangalore, will lead a survey of the Amur falcons across more than 12 locations in the northeastern regions with a group of volunteer birders, says Sreenivasan.

The extensive media coverage has brought about a positive change in the attitude of the hunters, he adds. “For probably the first time, the hunters understood that the killings shocked the entire world including several senior leaders in the state. It has definitely made them think!”

In another victory for the falcons, a tri-partite Memorandum of Understanding has been signed between the Wildlife Trust of India (WTI), Natural Nagas, a Wokha-based non-governmental organization, and the village council members (VCM) of three Naga villages—Pangti, Asha and Sungro—to aid the Nagaland Forest Department in halting the mass hunting of Amur falcons. 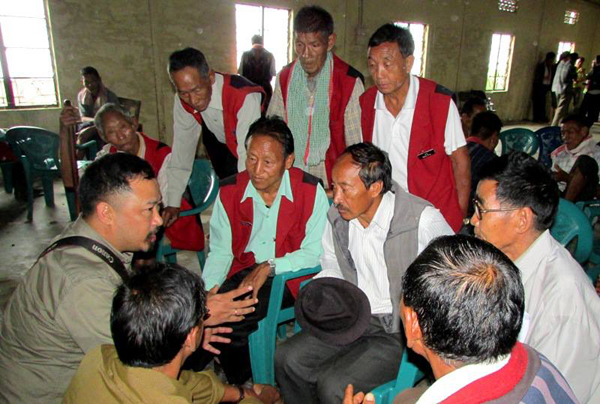 This collaboration which started as a result of the Conservation India report involved several meetings with VCM and other residents of the villages to understand local perceptions of the problem and the critical issues that need to be addressed.

“This has ensured that locals have been a part of the process, rather than just target audience to a campaign,” says Aditi Rajagopal, Project Officer, Awareness for Conservation, at WTI. “It has been encouraging that they themselves have tried to come up with solutions and have volunteered to actively be a part of the change.”

She adds, “The village council members believe that recent media reports of the killings have shown them in bad light, and are willing to make amends.”

Several awareness meetings and discussions later, the three parties have come up with several strategies to improve conservation of the falcons.

One of these strategies includes reducing their practice of slash-and-burn cultivation (or jhum cultivation) to protect the roosting habitat of the falcons. As part of the MoU, the VCM have also passed a resolution saying that nobody will hunt or kill the falcons, and if found guilty, the hunters will have to cough up a penalty of up to Rs. 5000 ($80)—a hefty amount for the villagers.

The local youth from the three villages plan to create watch squads to prevent hunting of the birds and protect their roosting and foraging habitats. Construction of watch towers to promote bird watching and awareness generation campaigns are also in the pipeline, according to the MoU. 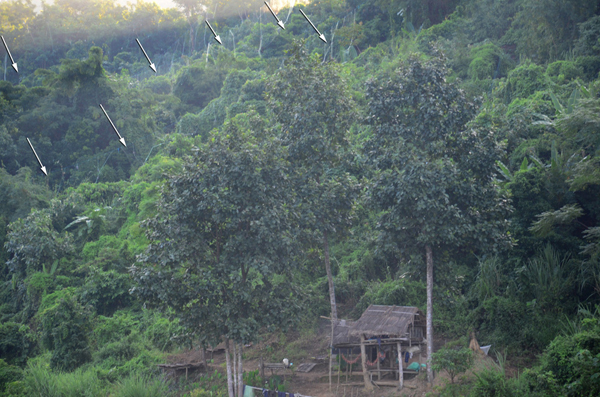 Hunting nets set up near camp. Photo by Shashank Dalvi.

To provide an alternative to the meat for which the birds are hunted, Natural Nagas and WTI have helped about 30 families in setting up poultry farms, a project they call “Bird for Bird.”

Their initial efforts, however, were met with some hostility.

“Normally, hunting has been a traditional custom for every Naga. So any resource from the forest is seen as a blessing,” says Steve Odyuo, founder of Natural Nagas. “Force got them more agitated and they even turned hostile towards us. It took us a long time to rebuild this trust and win back their confidence.”

He adds, “Awareness about conservation and the benefits of having wildlife around us was also missing, so when we reached out to them they were very receptive to our views and we are confident of very positive results.” 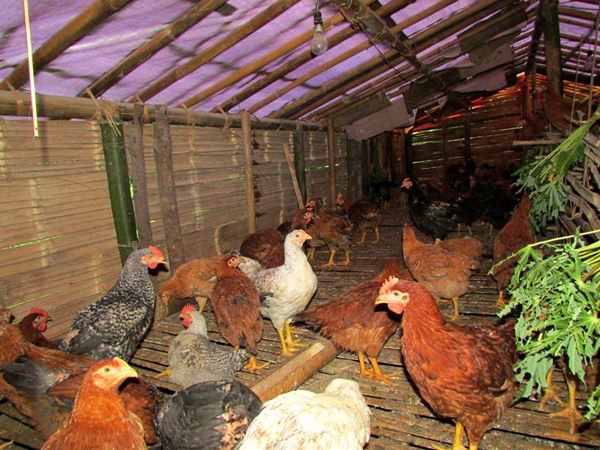 Poultry farms set up by Natural Nagas and WTI. Photo by Steve Odyuo. 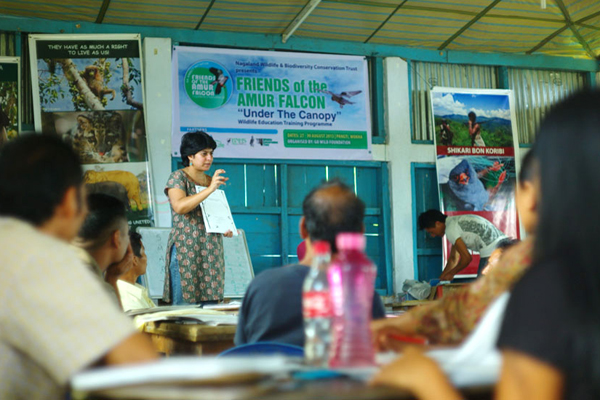 One of the training sessions. Photo by Ramki Sreenivasan.

(08/08/2013) For a young wild sloth bear who found himself amidst a panic-stricken village in India, rescue was fortunately, and surprisingly, close at hand. In a one-of-a-kind heartwarming story, a team from Wildlife SOS (WSOS) India – a conservation and welfare NGO – successfully rescued, treated and subsequently released the sloth bear back into the wild, but this time with a radio collar fitted around its neck.