Small hydroelectric projects in forested areas in Vietnam may be a front for logging operations in the country’s national parks, reports Vietnam Net.

According to Vietnam’s Ministry of Agriculture and Rural Development, some 20,000 hectares of forests have been cleared for 160 small hydro projects in recent years. That works out to 125 hectares per project. But a number of the projects aren’t economically viable — the main intent seems to be on gaining rights to exploit forest resources.

“A lot of small scaled hydropower plant projects which do not aim to generate electricity have been licensed. A high number of small hydropower plants have been licensed, but the economic efficiency has not been high,” stated the online newspaper. “The investment rate is high at VND16-20 billion for one MW of electricity. Since the plants are located in remote and mountainous areas, Vietnam has to pay high for the transmission costs.”

“A report showed that while the majority of the hydropower plants have the small capacity of less than 10 MW, they cover large areas of forest land–about 14 hectares for one MW of electricity generated.”

The article went on to quote Tran Viet Ngai, Chair of the Vietnam Energy Association, on the possible motivation for the dams.

“The investors might have some other purposes when trying to develop small scale hydropower plant projects,” he was quoted as saying. “The main purpose of a lot of investors is to exploit forest products.”

“Under the mask of developing hydropower plants, the investors can exploit wood legally, though no one admits this,” reported the article. “In principle, the investors have to afforest to compensate the plants they chop down. However, no one has done this.” 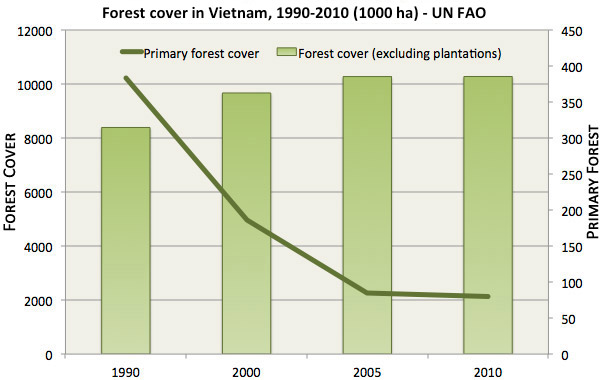 While Vietnam has seen an overall recovery in forest cover since the late 1980’s and early 1990’s, the country continues to rapidly lose primary forest cover. The extent of old-growth forests in the country has plunged 80 percent since 1990. Conversion for agriculture and tree plantations are the primary drivers of deforestation, while illegal logging remains a key cause of forest degradation.

Like other countries in the Mekong region, Vietnam has also experienced a dam-building spree in recent years. Vietnamese companies are actively involved in a spate of projects in the region. Nonetheless Vietnam has lately lodged protest against plans for dams on the mainstream of the Mekong River, which provides agricultural areas in southern Vietnam with nutrient-rich sediment.