Commentary by Owen Reynolds on 25 September 2013

For the majority of the new century, Americans have largely stopped caring about the environment. In that time, America has suffered 9/11, two of the nation’s four longest wars, the deepest depression in 80 years, increased inequality, and incompetent or fractured leadership. There’s been a lot on the public mind.

Our political and economic instability distracted the American public from pending global climate change. Policymakers saw economic and environmental stability as mutually exclusive—you can only have one or the other. However, we are starting to see and feel that these two things are intrinsically connected. As a nation, the United States simply cannot afford to wait any longer to make a big change.

The majority of the scientific community accepts the theory of climate change, even though their conservative use of terminology may confuse the general public. The same folks that classify gravity as a theory put climate change in the same category: it’s real and it’s largely our fault. Anthropogenic carbon, as well as methane, ozone, and increased water vapor emissions are pushing global temperatures ever upward. 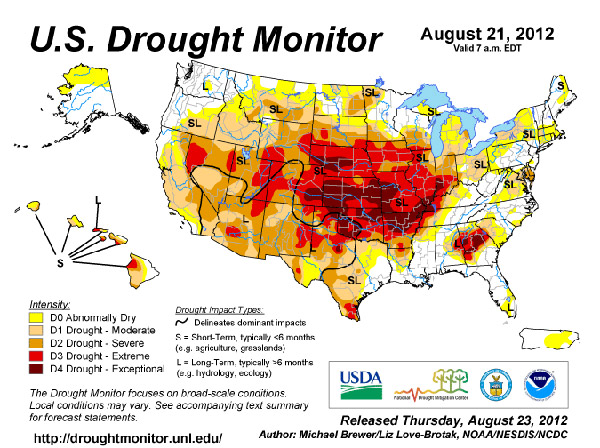 Without even considering the invaluable price of nature’s aesthetics, the costs of this global climate change and associated environmental degradation are staggering. Catastrophic weather, agricultural disruption, and rising sea levels pose huge threats to our economic stability and growth.

The first, and most visible culprit, is increased damage from destructive weather events. A National Resources Defense Council article counted $139 billion of taxpayer monies used to cover climate change damages in 2012. That’s nearly a full percent of U.S. GDP and more than the Federal Government outlays to most of the national departments.

Tropical Storm Sandy alone cost the citizens and the government $62 billion. Big events like this are, in effect, random—they could just as easily hit a major city as a sparsely-populated stretch of beach. The range of warm water needed to fuel hurricanes and tropical storms is encompassing more of our coastline every season. When these storms do strike urban centers, the results are biblical in all the bad ways. In 2005, Hurricane Katrina took the lives of 1,833 individuals. The total financial cost was estimated at $81 billion.

A second culprit is climate change’s negative impact on agricultural production. For example, the total cost of agricultural stress in 2012 was $48.5 billion. This comes for a combination of droughts and floods, both of which are reaching previously unseen frequencies.

The Great Plains is home to the Ogallala aquifer, one of the largest underground bodies of water in the world; it is also one of the most strained. Despite industrial-scale agricultural production, middle America is an increasingly vulnerable place to farm.

A third culprit the nation faces is the rising sea level. A 2010 study measured an average annual rise in sea level of 1.7 mm per year from 1950–1992 and about 3.3 mm per year from 1993–2009. The US National Research Council estimates that over the course of the 21st Century, seas will rise another 56–200 cm. The costs incurred to our government and taxpayers from rising sea levels are difficult to imagine—but they could be crippling if climate change is not mitigated.

Without being apocalyptic, it is also worth noting a fourth potential culprit. Natural disasters, famine, and rising tides are likely to cause political instability in those countries most harshly affected. Our globalized economy depends on an intricate web of trading partners, alliances, shipping lanes, and above all, global stability. When these factors are jeopardized, the risks to our interconnected economy are incalculable. Massive human suffering aside, such disentanglement of globalization would pose a massive burden on taxpayers and government bodies.

For better or for worse, America still captures the imagination of the world. If this nation steers in the direction of climate change mitigation policies, so will other major greenhouse gas polluters. Together, humans are the only species powerful enough to dictate out our own success or failure. Environmental sustainability and economic growth are not mutually exclusive.

And while it may seem fiscally infeasible to make the economic and legislative changes needed to slow greenhouse gas emissions and mitigate climate change, we simply cannot afford not to do so. The costs of climate change are certain to rise, but we can limit the magnitude. Seemingly expensive changes today are investments in our future—a way to hedge against bankrupting our nation. It’s good economic policy as much as it is magnanimous.