The arrests came two months to the day of Mora’s slaying, which occurred on Moín Beach on the Caribbean coast of Costa Rica, while the conservationist and a group of volunteers were patrolling the area for nesting sea turtles. Mora was beaten to death, while the volunteers were kidnapped, but later escaped and alerted authorities.

Costa Rican police say the suspects are part of a criminal gang that has attacked locals and tourists around Limón province. They cited a May 18 attack, where a tourist couple was kidnapped and beaten. The woman was raped.

According to authorities, evidence recovered during the raids on several homes in Moín, Limón and Guapiles, includes cell phones belonging to two of the sea turtle volunteers.

TicoTimes.net has more details about the circumstances of the arrests and a possible motive for the slaying. 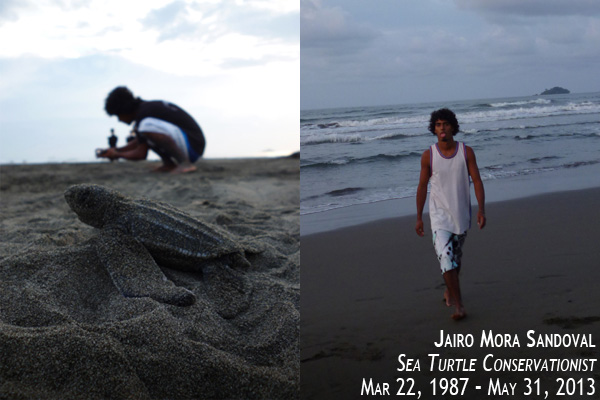 Leatherback hatchling in the foreground with Sandoval in the background. (right) Sandoval walking on the beach where he died after releasing over a hundred turtle hatchlings in 2012. Photos by: Carlyn Samuel.