Around twelve thousand of years ago, the Amazon was home to a menagerie of giant creatures: the heavily armored glyptodons, the elephant-sized ground sloth, and the rhino-like toxodons among others. But by 10,000 B.C. these monsters were largely gone, possibly due to overhunting by humans or climatic changes. There’s no question that the rapid extinction of these megafauna changed the environment, but a new study in Nature Geoscience posits a novel theory: did the mass extinction of big mammals lead to nutrient deficiency, especially of nitrogen, in parts of the Amazon rainforest?

Scientists have long noted the lack of phosphorous, an essential mineral for plant growth, in parts of the Amazon rainforest, particularly in the eastern region. But the Amazon may not have always suffered from patchiness in phosphorous deposits. Mammals are key dispersers of nutrients from their feces, urine, and even their bodies when they perish–and field research has already shown that larger animals (think elephants and rhinos) not only disperse more nutrients, but also disperse them further afield.

“Large animals play a disproportionately important role in this translocation of nutrients because they travel farther and have longer food passage times than smaller animals,” the scientists write. But today much of the nutrient dispersal in the Amazon is conducted by abiotic factors, i.e. rivers and air, which tends to concentrate nutrients in just a few places.

So, with the devastation of South America’s biggest creatures (including the extinction of 70 percent of animals over 10 kilograms or 22 pounds), the researchers theorize that the Amazon ecosystem lost its ability to disperse nutrients far-and-wide, an impact that is still visible today and has played a major role in the Amazon’s history. For example, slash-and-burn farming is practiced largely due to a lack of suitable nutrients for longterm crop production.

“Most of the planet’s large animals have already become extinct, thereby severing the arteries that carried nutrients far beyond the rivers into infertile areas,” lead author Christopher Doughty with the University of Oxford told the BBC.

Employing a computer model, the scientists estimated that nutrient dispersal was undercut by 98 percent when the big animals vanished.

“To the extent humans contributed to the megafaunal extinctions, this suggests that major human impacts on global biogeochemical cycles stretch back to well before the dawn of agriculture,” the researchers write. “Aspects of the Anthropocene may have begun with the Pleistocene megafaunal extinctions.” The Anthropocene is a geologic term that highlights the massive impact the human species has had on the current epoch.

But megafauna extinctions didn’t end twelve thousand years ago. Many of the world’s remaining megafauna populations are currently in decline and some even on the edge of extinction, perhaps heralding another round of nutrient deficiency in parts of the world like Asia and Africa.

Doughty notes his study can also help predict the impact “of further extinctions—a fate fast approaching many of the large animals that remain—and examine the likely impact thousands of years into the future.” 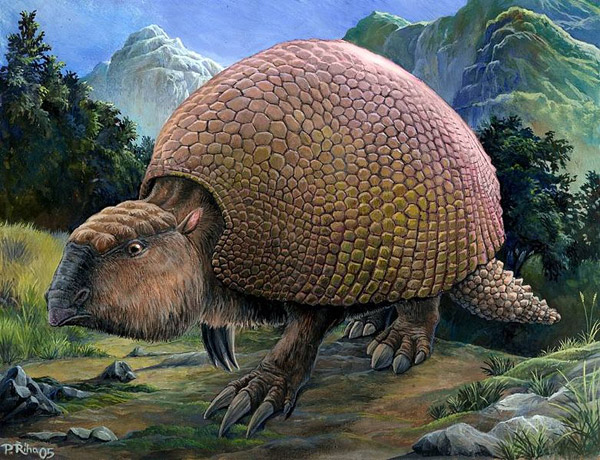 The extinct glyptodon was the size of a small car. Illustration by: Pavel Riha/Creative Commons 3.0.

(02/27/2012) Not long ago, geologically speaking, coyotes (Canis latrans) were bigger and more robust than today’s animals. In the late Pleistocene, over 10,000 years ago, coyotes rivaled grey wolves (Canis lupus) in size. But, according to a new paper in the Proceedings of the National Academy of Sciences (PNAS), coyotes shrunk significantly following the megafaunal extinction—including the disappearance of big herbivores like giant sloths and mastodons and predators like the smilodon—due to changes in prey and predator competition.

(10/25/2011) In 2009 poachers shot and killed the world’s last Vietnamese rhinoceros (Rhinoceros sondaicus annamiticus), a subspecies of the Javan rhino, confirms a report from International Rhino Foundation (IRF) and the World Wide Fund for Nature (WWF). The Vietnamese rhino was the last Javan rhino to survive on the Asian mainland and the second subspecies to vanish, following the extinction of the Indian Javan rhino (rhinoceros sondaicus inermis). The Javan rhino is the world’s most imperiled rhino species with now only around 50 individuals surviving in a single park on its namesake island in Indonesia.