Warmer ocean temperatures will increase the frequency and intensity of tropical cyclones, typhoons and hurricanes in “most locations” this century, concludes a new study based on simulations using six global climate models.

The research, published by MIT’s Kerry Emanuel in Proceedings of the National Academy of Sciences, projects the largest increase in cyclones in the western North Pacific. The only region that may see a decline in storm activity is the southwestern Pacific, according to the study.

The findings, which are consistent with research published elsewhere, could add to concerns over the growing cost of cyclones, which are fueled by warm seas. The economic toll from cyclones is expected to ballon in coming decades due to higher temperatures, rising sea levels and increasing coastal development. 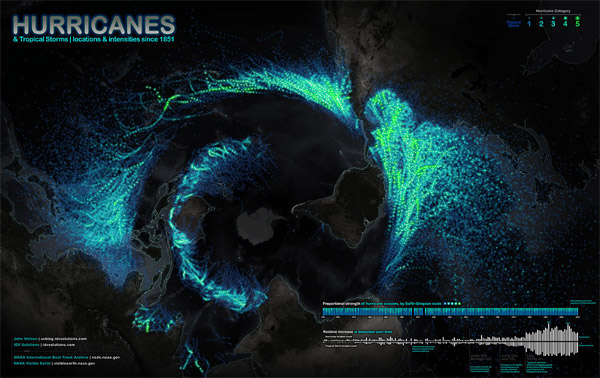 The path of every hurricane between 1851-2012. Given the predicted rise in ocean temperature — surface temperatures above 82 degrees F (28°C) are needed for a hurricane to strengthen — a number of studies have forecast increased hurricane activity in coming decades. Visualization developed by John Nelson.