It all started with a video: in 2009 a Russian man uploaded a video of himself tickling his exotic pet (a pygmy slow loris) from Vietnam onto the hugely popular site YouTube. Since then the video has been viewed over half a million times. But a new study in the open source journal in PLoS ONE, finds that such YouTube videos have helped fuel a cruel, illegal trade that is putting some of the world’s least-known primates at risk of extinction. Lorises are small, shy, and nocturnal primates that inhabit the forests of tropical Asia, but the existence of all eight species is currently imperiled by a booming illegal pet trade that has been aided by videos of lorises being tickled, holding tiny umbrellas, or doing other seemingly cute (but wholly unnatural) things.

“In Indonesia alone, where six species of loris occur, a minimum of 15,000 lorises are trafficked each year; this does not count the numbers that die before making it to markets,” lead author Anna Nekaris, with Oxford Brookes University and founder of the slow loris-organization Little Fireface Project, told mongabay.com. “In Indochina, no figures are available, but slow lorises have often been the most frequently encountered mammal in markets. In both regions, however, sellers report declines, saying they are ‘finished’ in the wild.”

Given the popularity of YouTube videos showing illegal pet lorises, Nekaris and her team decided to analyze how people responded to the videos through viewer comments. Selecting the video of that pygmy slow loris (Nycticebus pygmaeus) being tickled in Russia, the researchers made their way through 12,000 comments. Worryingly, they found that around 25 percent of people expressed a desire for slow loris “pet.” Many comments were along the lines of, “where can I get one?”

But even beyond being illegal—slow lorises are protected in each of their range countries—the loris trade is problematic for a number of reasons. For one thing, slow lorises that end up in pet trade are not captive-bred but taken directly from the wild.

“Slow lorises are impossible to breed in captivity. The track record of some of the most renowned zoos shows that the number of slow lorises born in these facilities is way below what is needed for a self-sustaining population. Indeed several species have never been bred in captivity,” Nekaris explains. “Without a shadow of a doubt the slow lorises we see in these YouTube videos are derived directly from the wild and not the result of some fictitious/magical captive breeding facilities.”

In order to capture a slow loris baby for the trade, poachers must kill the mother and sometimes whole family groups. In other words, several slow lorises may die for one pet, and few pet owners realize their purchase is likely responsible for the death of their “pet’s” mother. Further mortalities occur while the slow loris waits for a buyer.

“Slow lorises are the world’s only venomous primates, so in hopes to keep them from biting, traders cruelly clip or rip out their teeth with pliers, wire cutters or nail clippers. This is done in the open street with no anesthesia, resulting usually in slow painful death due to infection,” Nekaris says. 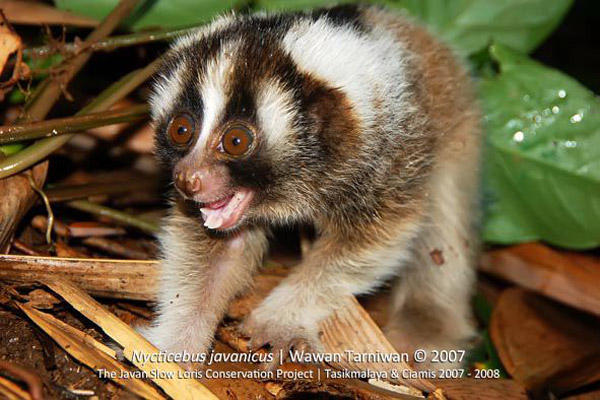 This wild baby Javan slow loris is just as it should be, with a full set of teeth, and still living with its family group in the wild. Photo by: Wawan Tarniwan.

This cruel operation also makes it possible to release confiscated lorises back into the forests, according to Nekaris, who adds that “the procedure is useless since their deadly venom can still be administered via their powerful jaws.”

Keeping a loris is also incredibly difficult. Little is known about the animal’s dietary needs even by scientists (for example the slow loris shown in the tickling video is clinically obese), and few of these pets live long.

However, the study also found a slight shift in opinions following the establishment of a Wikipedia page called ‘Conservation of Slow
Lorises’ in 2011 and the airing of a documentary on the BBC about the slow loris trade called the Jungle Gremlins of Java in 2012. After this, comments expressing a desire to own a pet slow loris dropped to about 10 percent on the site per month, and those with a conservation message rose. But the videos are still seen as reinforcing both the illegal trade and the idea of slow lorises as “cute pets,” instead of wild and poisonous primates that hugely sensitive to bright lights and human handling.

Today, all of the world’s slow lorises are listed as either Vulnerable or Endangered by the IUCN Red List, and the Javan slow lorises is considered among the world’s top 25 most imperiled primates. Lorises are also threatened by deforestation and the traditional medicine trade, but play hugely important roles in their ecosystems by pollinating plants and eating insect pests.

Nekaris told mongabay.com that one of the big problems for slow lorises and other animals exploited by sites like YouTube is that these social sites don’t allow users to flag animal media as “illegal.” 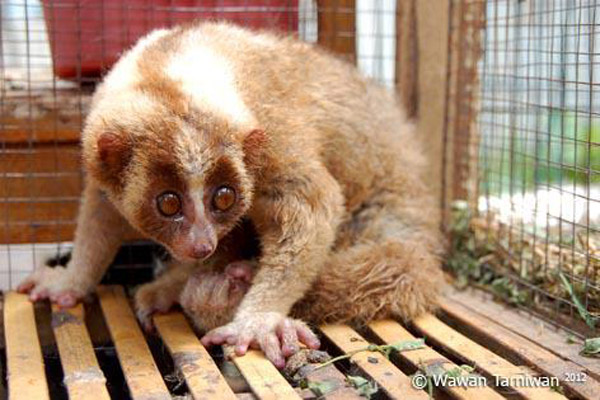 This Javan slow loris is already severely dehydrated, terrified, and shows injured hands and horrific fur condition. It is unlikely to make it to any YouTube video. Photo by: Wawan Tarniwan.

“Currently, no Web 2.0 site (e.g. Facebook, YouTube) allows viewers to report that animal material is illegal. Animal cruelty is available on YouTube, but is vastly different from illegal animal activity that threatens an entire group of species. If this flagging option were available, YouTube could then either embed flagged videos with warnings about illegal pet trade, poaching, medicinal, ivory or fur trade (for example), or ideally remove the videos altogether, as they would videos portraying illegal arms, pornography or drug use,” Nekaris says.

The new study also highlights the growing role of the Internet, and even social media, in fueling the illegal trade in wildlife, which is decimating thousands of species worldwide. Experts have estimated that the illegal wildlife trade is worth around $19 billion annually and is often connected to organize criminals who are also funding human trafficking, drugs, weapons, and civil unrest.

“Hundreds of lorises die in the markets for the few that make it to these videos,” says Wawan Tarniwan, an Indonesian wildlife photographer not affiliated with the study. “There is no greater contrast between seeing a slow loris in the forest at night and the sadness in their eyes when used as pets in people’s homes.” 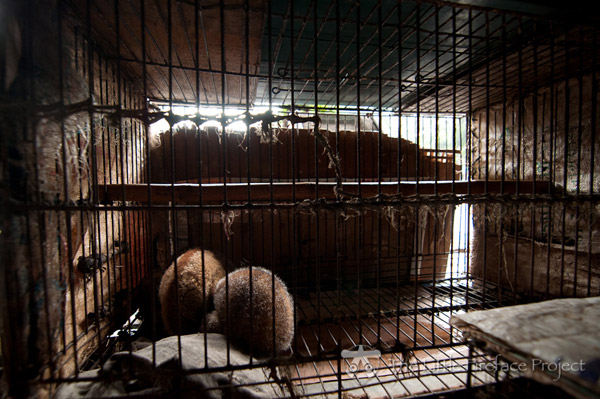 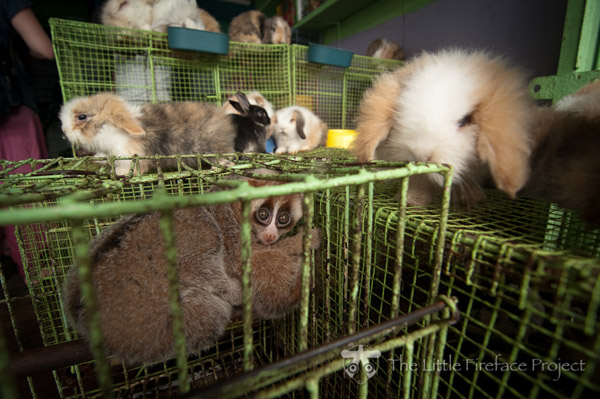 These three juvenile Sumatran slow lorises huddle in fear, for sale in bright daylight, with no proper food or water, sold under a plethora of baby rabbits. Photo by: The Little Fireface Project. 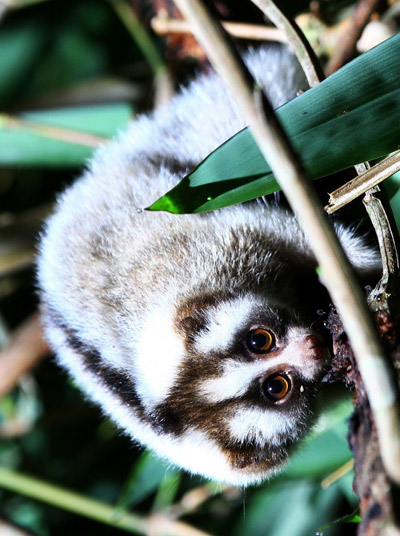 This juvenile Javan slow loris, at just a few months old, practices gouging for gum. The full set of teeth is needed to engage in this important slow loris behaviour—gum being their most important dietary item. Photo by: The Little Fireface Project.

(06/24/2013) A comprehensive survey of the wildlife sold in the markets of Tuensang has resulted in a stunning record of the wildlife trade in the state of Nagaland in northeast India, as reported in a new study published in mongabay.com’s open-access journal Tropical Conservation Science. Once a week, researchers with the Sálim Ali Centre for Ornithology and Natural History and the Near Chang Baptist group entered the Tuensang market and carried out intensive surveys and interviews of vendors selling wild birds or mammals.