An edited version of this article first appeared on NatureIndia on July 8th, 2013.

“Gone are the tiger-filled days when Corbett, as a small boy wandering the jungles of Nepal in the 1880s, peeped over a plum bush that heaved as a tiger walked out on the far side.” Adele Conover, in the Smithsonian magazine.

Even as recently as the 1930s, 40,000 tigers roamed the forests of India. By the 1970s, tiger number had plummeted to less than 2,000. Historically, the tiger ranged from the Caspian Sea to the Russian Far North to the Indonesian islands of Java and Sumatra. Now, they occupy just 7% of this historical range, with India home to over half of the tigers remaining in the wild. And what a world they inhabit.

Sharing homes with the world’s second most populous country is no mean feat. The habitat the tiger lives in is no longer continuous, but broken up with veritable seas of humanity in-between. These fragmented forests mean tigers occur in very small populations, sometimes as small as 2 tigers in a particular place. In this fragile final frontier of the world’s tigers, evaluating how they are faring is crucial.

Samrat Mondol and Uma Ramakrishnan from the National Centre for Biological Sciences in Bangalore have been studying genetic signatures in tigers by analyzing their DNA. The genetic material in any living organism is passed on from parent to offspring. If an organism dies without reproducing, any unique DNA it has is lost forever. Genetic material is like an arsenal – more variation in the DNA means the species is better equipped to deal with different hardships, like a sudden disease outbreak.

Imagine the Maharaja of Surguja, who has the dubious distinction of shooting the most number of tigers (1,100), let loose in prime tiger habitat. Perched on an elephant and surrounded by beaters, he would have wiped out a lot of unique tiger genetic material. How did such large scale hunting by Indian royalty and British sportsmen affect genetic variation in the tiger?

A peek at the past

Mondol and Ramakrishnan teamed up with Michael Bruford from Cardiff University in the UK. Bruford’s lab specializes in extracting genetic signatures from old, preserved animal samples. Using tiny bits of skin and bone from tiger specimens at the Natural History Museum in London and the National Museum of Scotland in Edinburgh, they obtained a genetic profile of tigers hunted from before 1950. A lot of these museum specimens are from areas where tigers are not found anymore – Afghanistan, Rajputana and Gujarat.

Genetic material degrades over time, and even under the best museum conditions, it is an art to get enough stretches of DNA to make a meaningful genetic profile. The oldest sample Mondol used was a skull from 1836 – more than 170 years old. The authors compared this historical genetic profile, with genetic structure in current tiger populations (from Mondol and Ramakrishnan’s earlier work). They looked at two different kinds of genetic material – one inherited from only the mother (DNA from the mitochondria, found outside the nucleus of a cell) and the other, from both parents (DNA from inside the nucleus). Looking at both kinds of DNA gives an interesting, highly informative picture – you can compare how much females are moving, from the mitochondrail DNA, with how much males are moving, from the nuclear DNA.

The results show that tigers have lost about 93% of the maternally inherited mitochondrial DNA. This sharp drop is also because of the behavior of tigers – females tend to setup territories next to their mothers, or even inherit the mother’s territory. Females also hold relatively smaller territories (about 20 sq km). Males move away from where they are born and establish new territories, usually much larger than that of females (60 to 100 sq km). Wiping out tigers from one area means, a lot of related females die out, and their genetic material is lost forever.

Tiger populations then and now

After creating a kind of family tree using tiger samples from different areas, the authors could see that the tiger museum samples formed two populations, one with samples from northeastern India and peninsular India (Western Ghats and Deccan Plateau), and the second with samples from the Terai region and the semi-arid regions in Rajasthan (see map). This means, tigers from the peninsula were moving between the south and the northeast, but the Terai and semi-arid regions were distinct.

When analyzing the current samples, the peninsular India – northeastern population remained the same. But, the semi-arid and Terai tigers form two populations; what was one population in the early twentieth century is now two.

“This can be because of the huge amount of development, and resulting human presence in Punjab and Haryana,” says Uma Ramakrishnan, senior author of the paper. Such a sub-division of a population into two over a relatively short time period is not usually observed in mammals like the tiger that can move large distances. This means, habitat fragmentation is greatly affecting tiger movement.

The fact that populations from northeastern India and peninsular India are still connected comes as a pleasant surprise. Ramakrishnan feels that the remnant forests along eastern India have allowed tigers from peninsular India move to the Northeast and vice versa. “However, we need more samples from eastern and central India to know more about how much these populations are connected,” she added.

An earlier study by the Wildlife Institute of India, and Ralph Tiedmann from the University of Potsdam in Germany showed differences between tiger populations in the two regions. Tiedmann said, “This connectivity is shown in nuclear DNA, but not in mitochondrial DNA. This can indicate that males are moving around and connecting peninsular India with northeastern India, and females are staying close to their mothers, as usually observed in tigers.” 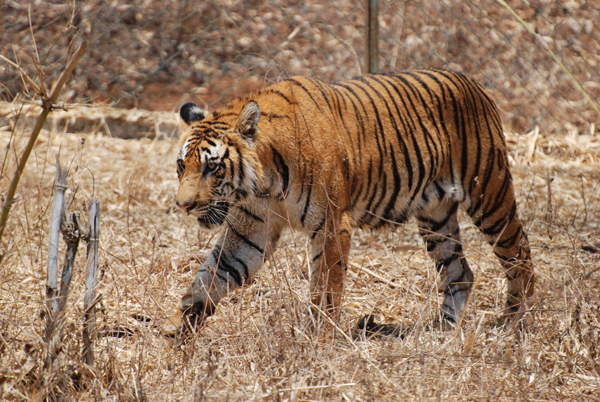 A Bengal Tiger in Karnataka, India. Photo by Paul Mannix.

We must keep in mind that the samples that made it to the museums are the ones shot by the British. “North India includes places where large numbers of tigers could be shot, even 120 in 3 months in the Terai as shown by some counts,” says environmental historian Mahesh Rangarajan, who was not involved in the study. “Also, few tigers shot by princes – and they shot a lot – ended up in museums overseas,” he said.

Even though the samples used only give a rather prejudiced snapshot of historical tiger genetics, the data is still important, as it reframes the general perception of tigers. Numbers from tiger censuses have been slowly increasing (295 tigers were added between 2008 and 2011). But, do numbers convey the entire picture? Equally important is knowledge of whether tiger populations are connected, and whether they are exchanging genetic material in a healthy manner so that their genetic arsenal is not depleted.

We will need more conservation action to clearly establish the connectivity between the different tiger populations we have today. As of now, it is clear that genetic variation in tigers has dropped since the last century. They are losing their genetic arsenal, and the way to better protect the tiger is to take genetic connectivity into account when framing management plans.

Quote from: Conover, A. (2005) The Object at Hand. Smithsonian magazine, [online] Available at: http://www.smithsonianmag.com/science-nature/object_nov95.html?c=y&page=1 [Accessed 8 July 2013].

(06/28/2013) The critically endangered Sumatran tiger may be even rarer than previously thought, reports a study published in the journal Oryx.