Forests may be becoming more efficient in their use of water as atmospheric carbon dioxide levels rise, reports a new study in Nature.

The findings are based on data from 300 canopy towers that measure carbon dioxide and water flux above forests at sites around the world, including temperate, tropical, and boreal regions. The researchers found that plants are becoming more water efficient as CO2 levels rise. While the findings are consistent with forecasts using models, the rate of efficiency gain is higher than expected.

“This could be considered a beneficial effect of increased atmospheric carbon dioxide,” said Harvard University’s Trevor Keenan, the first author of the paper. “What’s surprising is we didn’t expect the effect to be this big.” 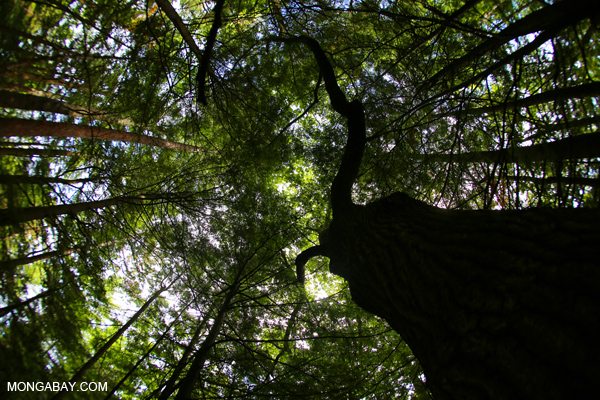 Forest in New Hampshire. Photos by Rhett A. Butler

Water is a byproduct of photosynthesis, the process by which plants convert sunlight and carbon dioxide into sugars. Mechanically, plants take in carbon dioxide and release water through tiny pores called stomata on their leaves. Higher CO2 levels “mean the stomata don’t need to open as wide, or for as long, meaning the plants lose less water and grow faster,” according to a statement from Harvard.

The research suggests that some forests may experience some benefits from rising CO2 levels.

“A large proportion of the ecosystems in the world are limited by water – they don’t have enough water during the year to reach their maximum potential growth,” said Keenan. “If they become more efficient at using water, they should be able to take more carbon out of the atmosphere due to higher growth rates.” But higher carbon dioxide levels could take a toll on some forests through increased temperatures, which can push plants toward a threshold where respiration rates increase at the expense of growth. Other research suggests tropical tree species may be particularly sensitive to temperature shifts. Furthermore, climate change is already causing shifts in rainfall patterns, triggering large-scale die-offs in some forests, like the American West and parts of the Amazon rainforest. Drought and higher temperatures, combined with human activities, can substantially increase the risk of fire as well.

These factors mean the authors are still taking a cautionary tone on the impact of rising carbon dioxide on forests.

“We’re still very concerned about what rising levels of atmospheric carbon dioxide mean for the planet,” said co-author Andrew Richardson — also of Harvard — in a statement. “There is little doubt that as carbon dioxide continues to rise – and last month we just passed a critical milestone, 400 ppm, for the first time in human history – rising global temperatures and changes in rainfall patterns will, in coming decades, have very negative consequences for plant growth in many ecosystems around the world.”

An undamaged Amazon produces its own clouds and rain

(09/21/2010) Researchers recently traveled to the remote Brazilian Amazon to investigate how clouds are formed and rain falls in an atmosphere unburdened by human-caused pollution. Studying the atmospheric aerosol particles, which impact cloud formation and particles, above a pristine forests, researchers discovered that when left alone the Amazon acts as its own ‘bioreactor’: clouds and precipitation are produced by the abundance of plant materials.