Snow leopards, wild yaks and other iconic wildlife on the world’s highest mountains and great steppes are becoming “fashion victims” of the surging global trade in cashmere, new research has revealed.

Scientists found wildlife being driven to the margins of survival by the “striking but unintended consequences” of huge increases in the numbers of the goats producing the luxurious lightweight wool. The herds eat up the grass that previously supported antelopes, wild asses and their predators. Further problems were retaliatory killings of leopards and wolves by herders after livestock attacks, the killing of wild animals by herders’ dogs and the transfer of disease from livestock to wild animals.

“In the absence of commitment across global and local scales, this iconic wildlife will cease to persist as they have for millennia,” concluded an international team of researchers in the journal Conservation Biology. “Rather than serving as symbols of success, these species will become victims of fashion.” The study showed that 95% of all the forage across the Tibetan plateau, Mongolia and northern India was consumed by goats, sheep and other livestock, leaving just 5% for wild animals.

“They are really on the margins,” said one of the team, Charudutt Mishra at India’s Nature Conservation Foundation and a previous winner of a prestigious Whitley award. Among the wildlife being squeezed out are the Przewalski horse, bactrian camels, Tibetan antelopes and saiga. 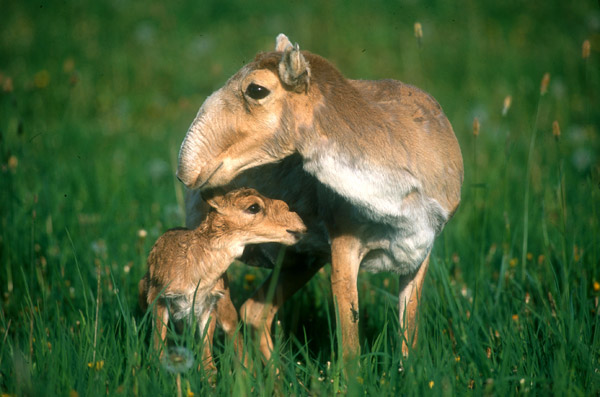 Saiga populations have collapsed: dropping around 95 percent in just 15 years. The species, a relic of the Pleistocene, is currently listed as Critically Endangered. Photo by: Joel Berger.

“But it is not an easy issue because producing cashmere does benefit local communities and economic development is essential,” said Mishra. “I care about the snow leopard but I also genuinely care about those people and their livelihoods. The solution is about empowering them.” Examples of small projects that have helped so far, he said, are paying bonuses for cashmere goods produced by communities that do not shoot snow leopards or poach wild animals, improvements to the corrals in which the goats live to prevent leopards killing them and vaccination of goats to prevent the spread of disease. In Pakistan, an insurance scheme for livestock has reduced retaliatory killing of snow leopards.

Mishra said there was time, though not much, to make such schemes more widespread and protect the wildlife. He said it was not difficult to persuade communities of the need for conservation: “You don’t have to preach, people inherently see the value.”

The UK is among the top four importers of Mongolian cashmere, a trade which has grown into a multi-billion dollar industry. In Mongolia alone, numbers of domestic goats have grown from 5 million in 1990 to almost 14 million in 2010. Ninety percent of cashmere comes from China and Mongolia. 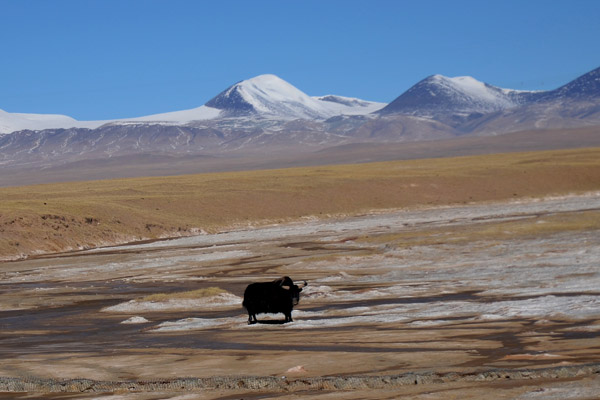 An elusive wild yak amid the glaciers. This species is currently considered Vulnerable. Photo by: Joel Berger. 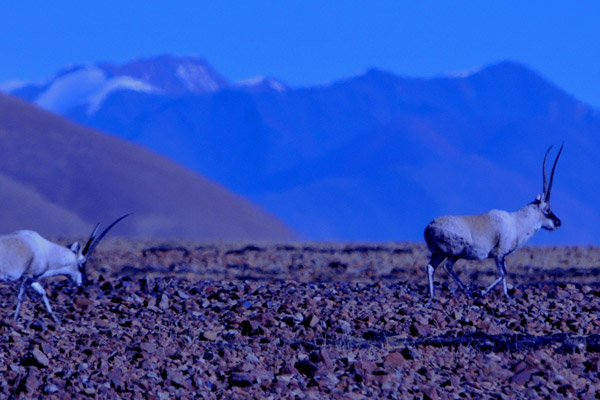 The chiru antelope is listed as Endangered. Photo by: Joel Berger.

Asia’s third largest animal may be on the rebound

(01/17/2013) Unlike Asia’s largest animal (the elephant) and its second largest (the rhino), the wild yak—the third largest animal on the world’s biggest continent—rarely makes headlines and is never paraded by conservation groups to garner donations. Surviving on the top of the world, in the Tibetan-Qinghai Plateau, the wild yak (Bos mutus) lives it life out in such obscurity that even scientists know almost nothing about it.