6/24/13 update: APRIL responded to request for comment. Its remarks have been added to the story.

“On 14 June 2013, the FSC International received from our Asia-Pacific and China offices written requests by APRIL subsidiaries to withdraw their FSC certificates,” said the FSC in a statement. “No reason for the withdrawal was offered.”

APRIL however said on June 24 that its decision to pull out relates to the FSC’s “Policy for Association”, which applies to activities by subsidiaries of a company.

“The decision by APRIL and companies associated with APRIL not to hold or seek FSC CoC/CW certification for the foreseeable future is based on concerns about the FSC’s Policy for Association,” APRIL told mongabay.com via email. “This renders ineligible for FSC certification companies which are part of a group that has converted more than 10,000 hectares [of forest] within the past five years.”

But Greenpeace, which together with WWF Indonesia and the Rainforest Action Network filed the complaint May 23, had a different take, arguing that the move effectively pre-empts a formal FSC investigation of the APRIL’s logging practices.

“News came last Friday that before an NGO-initiated FSC complaint process even had an opportunity to begin to investigate APRIL’s deforestation practices, the company had effectively walked out on the FSC’s certification scheme,” Bustar Maitar of Greenpeace Southeast Asia wrote in a blog post. “Seemingly, APRIL did not want to risk the scrutiny of FSC’s Policy for Association complaints process.”

“By withdrawing from the FSC before it was kicked out, APRIL seems to be hoping to avoid the embarrassing publicity that it is, indeed, linked to forest destruction.” 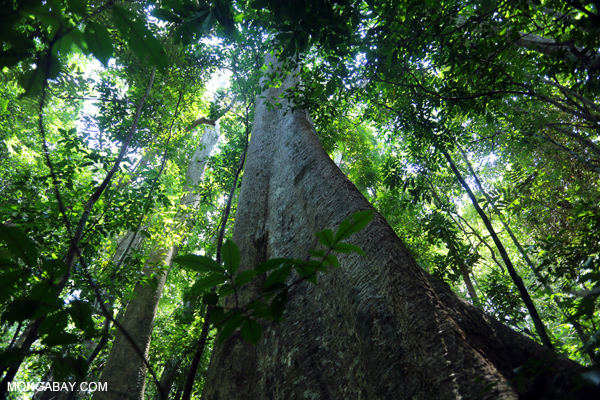 APRIL — Indonesia’s second largest pulp and paper producer — has been targeted for years by environmental groups on account of its forest management practices, which involve large-scale conversion of natural forests and peatlands on the island of Sumatra for industrial timber plantations. While APRIL maintains it operates within the law and embraces key concepts of environmental sustainability, at times it has faced strong opposition from local communities, including a 2011 incident where villagers sewed their mouths shut to protest planned logging of a community forest.

Given this record, the fact that APRIL has held onto FSC certification has been a sore point for green campaigners. Now Greenpeace is using the latest developments as a rallying call for strengthening elements of the certification scheme. Maitar’s blog post explains:

The story started back in 2008, when APRIL convinced an FSC certifier that it took the issue of protecting forests seriously. APRIL was allowed to market a number of its products with the FSC logo, so long as they were not made with fibre from ‘uncontrolled’ sources, such as deforestation.

But after just two years, the FSC certifier decided to cut ties with APRIL’s mills in Indonesia – the major factor being APRIL’s failure to comply with a deadline ‘to stop all conversion of natural forest’. Nevertheless, APRIL – being a global player in the paper industry – had a host of sister paper mills in China that still held the rights to use the FSC logo for some of their products.

Greenpeace, together with WWF and the Rainforest Action Network (RAN), thought it was about time that APRIL no longer be allowed to use the FSC logo to green its credentials, anywhere in the world. In May, our three organizations filed a formal complaint with the FSC asking it to disassociate its brand from all APRIL companies, including those that still hold FSC certificates.

The latest development looks like APRIL didn’t want to get embroiled in a mess of its own making. While APRIL has requested that all of its FSC certificates be withdrawn, this does call into question why the certifiers, SGS, Bureau Veritas and QMI granted the certificates in the first place.

If the FSC is to avoid use of its logo by companies not committed to the basic fundamental principles of responsible forest management, it needs to strengthen its due diligence procedures as part of its Policy for Association.

It isn’t the first time that Greenpeace has called for stronger FSC standards, but the group’s influence is limited by the structure of the multi-stakeholder body, where standards are put to a vote by members with a diverse array of interests. Some environmentalists complain the standard is too weak, allows first-time logging of primary forests, and doesn’t prevent the sort of “label laundering” involved in APRIL’s case.

Overall the FSC has certified some 179 million hectares of forests in 79 countries worldwide based on “environmental, economic, and social” criteria. Most of those forests are located outside the tropics.