Activist group Greenpeace says it will publish a series of case studies highlighting examples of good and bad practice among operations certified under the Forest Stewardship Council (FSC), an eco-standard for forest products. Greenpeace, an FSC member since the body was found in 1993, says that as the standard has expanded, the risk to its credibility has also increased.

“Greenpeace fears that as the system has grown, the FSC’s implementation and interpretation of its standards have been watered down,” the group said in a blog post. “This is why we have just published the first set of case studies highlighting both the best practice and the areas where FSC has to improve to maintain its reputation and ensure it is a logo that consumers can trust.”

“These case studies will show the standards that must be consistently met if the FSC is to maintain its credibility.”

In the Finland case, Greenpeace says that UPM, Metsa Group and Stora Enso are logging endangered forests but continue to produce under the FSC ‘MIX’ label.

“In Scandinavia the mismanagement by companies of FSC-controlled wood is threatening the survival of species at risk,” writes Greenpeace’s Judy Rodrigues.

“Recent field investigations show that this wood is coming from flying squirrel habitat and old-growth forests, which are being clear-cut by the Finnish state forestry company, Metsahallitus, to supply Finland’s forestry giants. This is not responsible forestry, and should not be endorsed by the FSC.” 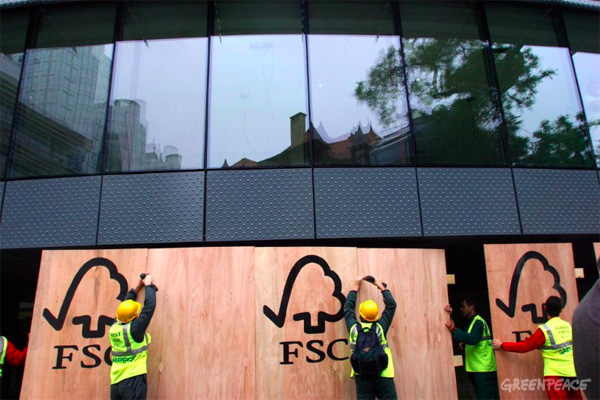 Greenpeace activists build an FSC plywood blockade outside the EU social and general headquarters in Brussels.

Greenpeace has periodically criticized what it calls abuses under FSC certification. For example, it recently targeted FSC approval of logging operations in the Democratic Republic of Congo (DRC). In 2008 it published a report citing areas for reform, including revising its auditing and compliance body, consultation processes, and review policies.

But other groups have been more critical of the FSC. For example, the Rainforest Foundation UK has been a persistent critic of FSC certification, with the group’s Simon Counsell going as far as calling the standard “the Enron of Forestry”. Enron was an energy firm that famously failed after fabricating its financial numbers. Meanwhile FERN, a European forest NGO, conspicuously pulled out of the FSC shortly ahead of the 6th General Assembly in 2011.

Nonetheless Greenpeace says that the forest certification is critical in a world of increasing demand for fiber and declining forests, and that FSC represents the best option among several competing standards.

“Greenpeace does not believe that other forest certification systems, such as PEFC, SFI and CSA, have the ability to ensure responsible forest management,” writes Rodrigues. “While the FSC faces challenges, we believe that it contains a framework, as well as principles and criteria, that can guarantee socially and ecologically responsible practices if implemented correctly. The other systems lack robust requirements to protect social and ecological values.”

The FSC has certified some around 180 million hectares in 79 countries worldwide.