The global population could grow by another 4 billion people by the end of the century if fertility rates in Africa don’t decline, according to a new report by the United Nations. Currently around 1.1 billion people live on the continent, but that number could skyrocket to 4.2 billion (a 380 percent increase) by 2100, causing global population to hit 11 billion.

“The fertility decline in Africa has slowed down or stalled to a larger extent than we previously predicted, and as a result the African population will go up,” said report co-author Adrian Raftery with the University of Washington Center for Statistics and the Social Sciences.

In 2011, the UN projected that around 10.1 billion people would live on Earth by the end of the century, but undaunted reproductive rates in Africa has now made that estimate look too small. The authors employed new data on Africa’s demographics and better fertility forecasting modeling to reach the new estimate.

Global population has grown exponentially over the last century, jumping from just 2 billion in the 1920s to 7 billion today. In addition, while it took over a century to go from 1 billion to 2 billion, it took only a dozen years to go from 6 to 7 billion. Overpopulation is impacting everything from global climate change to economics and resource scarcity to current biodiversity crisis.

The new analysis projects that Nigeria will see the greatest population increase this century, increasing by nearly 500 percent by 2100. India will be second and the U.S. eighth. On the other end of the list, China will see the largest population decreases, falling by about 20 percent. Population declines are also expected in some European countries.

“These new findings show that we need to renew policies, such as increasing access to family planning and expanding education for girls, to address rapid population growth in Africa,” Raftery says.

Experts have long noted that the best way to slow population growth is equal rights and better education for women in addition to family planning and access to contraception.

“Right now, 222 million women in the developing world lack access to modern contraception. This has far-reaching consequences for their health, and their opportunities to get an education, earn an income, take care of their families, and determine their own futures,” said Suzanne Ehler, president of Population Action International, in a statement. “The fact that any woman does not have the tools to decide the size of her family is absurd. That 222 million women do not is a tragedy, and a huge opportunity for all of us to do more.” 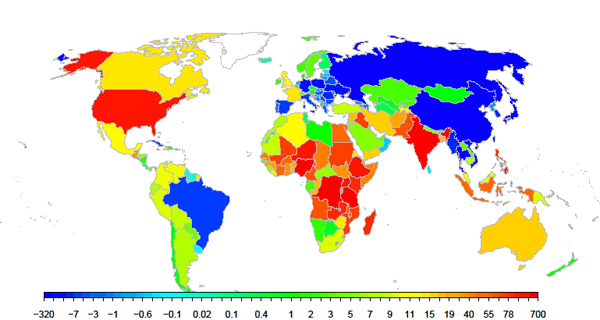