Bachmann was right? $2 gas, with a catch

One of Republican House member Michele Bachmann’s most famous and controversial campaign promises — that Americans would see $2-a-gallon gasoline prices if she were elected president — may have come true without her even winning the nomination. Only not in the way she expected.

According to the Department of Energy, many Americans are today paying well less than $2 per gallon. The caveat? Those drivers are using electric cars. A new calculator from the Department of Energy (DOE) — dubbed eGallon — shows that electric car owners in California are effectively paying the equivalent of $1.51 per gallon of gas, or more than $2.00 less than the average nationwide price. The average eGallon price U.S.-wide is just $1.14.

“The eGallon provides a metric that is easily comparable to the traditional gallon of unleaded fuel,” explained a statement from the DOE. “That comparison is made by calculating how much it would cost to drive an electric vehicle the same distance as a similar conventional vehicle could travel on a gallon of gasoline.” 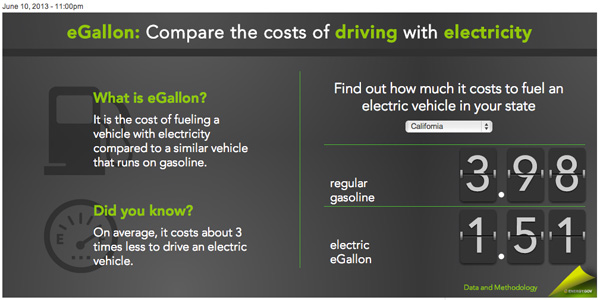 “Consumers can see gasoline prices posted at the corner gas station, but are left in the dark on the cost of fueling an electric vehicle. The eGallon will bring greater transparency to vehicle operating costs, and help drivers figure out how much they might save on fuel by choosing an electric vehicle,” he said in a statement. “It also shows the low and steady price of fueling with electricity.” 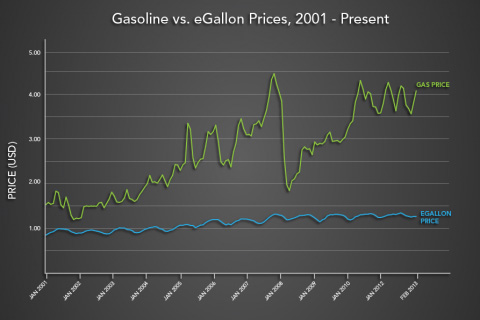 Sales of plug-in electric vehicles (PEV) have been rising rapidly, tripling in 2012 with more than 50,000 cars sold.

“Last year, the Chevy Volt PEV topped Consumer Reports’ annual owner-satisfaction survey for the second straight year, while the Tesla Model S was awarded the 2013 Motor Trend Car of the Year,” notes DOE. “Almost 60 percent of the vehicle models sold in the U.S. last year were outsold by the Chevy Volt, putting it squarely in the mainstream of the U.S. automobile market.”

Bachmann made her promise during a South Carolina campaign stop in August 2011.

“Under President Bachmann you will see gasoline come down below $2 a gallon again,” Bachmann said. “That will happen.”

“The day that [President Obama] became president gasoline was $1.79 a gallon. Look what it is today.”