Plants re-grow after five centuries under the ice

While monitoring the retreat of the Teardrop Glacier in the Canadian Arctic, scientists have found that recently unfrozen plants, some of which had been under ice since the reign of Henry VIII, were capable of new growth.

While in the field, the researchers from the University of Alberta discovered that the receding ice–which has doubled from 2 meters per year in the 1990s to 4.1 meters per year in 2009–had uncovered lots of mosses and other non-vascular plants, including more than 60 plant species. Upon careful examination, the scientists were impressed by how well preserved the delicate bodies were; the stems and leaf structures were perfectly intact, although some of them were only one-cell layer think. Using radiocarbon dating, they determined that those plants have been frozen for 500 years since the Little Ice Age when the glacier was at its maximum.

The most surprising thing, however, was that many of the plants were showing signs of life: they had green tips and fresh off-shoots, even though they have only been ice-free for less than a year and were just a few centimeters away from the glacier margin. 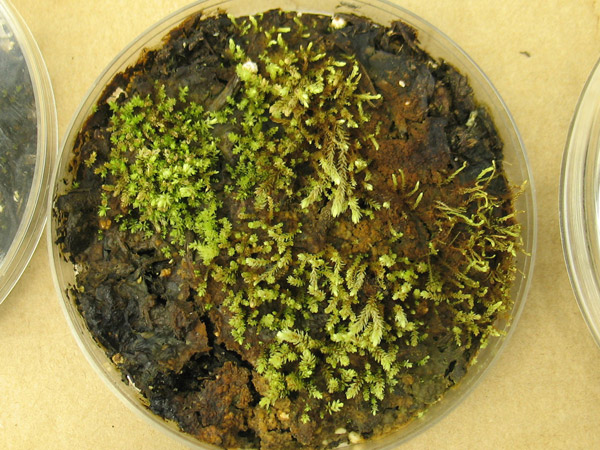 Plants have long been reported to emerge from beneath Arctic glacier ice. One study from 1966 stated that “vigorous new moss shoots appear in places to be growing  directly out of the underlying dead moss.” It concluded the new growth was a result of germination of either dormant or migrant spores on the “dead moss mats.”

That and all other publications since then, presumed that the emergent vegetation was dead. Now for the first time, researchers realized that at least part of that re-growth is coming from the Ice Age plants themselves. “This is an important distinction,” explains the lead scientist Dr. Catherine La Farge from University of Alberta.

To confirm their observations in the field, the team of scientists collected samples of these recently uncovered plants and grew them in the lab under careful monitoring. The results were unprecedented: a third of the plants re-grew! The discovery was reported in the prestigious journal Proceeding of the National Academy of Sciences (PNAS) this week.

The second important finding about this scientific discovery is that the plant cells grown in the lab acted as stem cells: they were capable of regenerating the entire plant regardless of which part of the body did the original cell come from. This capability is known as totipotency. Spontaneous plant regeneration from a few viable cells is well-known in mosses. But until now it had never been observed in 500 year old specimens.

These results demonstrate that plants buried by ice hundreds of years can remain dormant and serve as an unrecognized genetic reservoir on recently uncovered land, concludes Dr La Farge.

Future generations to pay for our mistakes: biodiversity loss doesn’t appear for decades

(04/15/2013) The biodiversity of Europe today is largely linked to environmental conditions decades ago, according to a new large-scale study in the Proceedings of the National Academy of Sciences (PNAS). Looking at various social and economic conditions from the last hundred years, scientists found that today’s European species were closely aligned to environmental impacts on the continent from 1900 and 1950 instead of more recent times. The findings imply that scientists may be underestimating the total decline in global biodiversity, while future generations will inherit a natural world of our making.

(04/15/2013) How many animal individuals are needed to ensure a species isn’t doomed to extinction even with our best conservation efforts? While no one knows exactly, scientists have created complex models to attempt an answer. They call this important threshold the “minimum viable population” and have spilled plenty of ink trying to decipher estimates, many of which fall in the thousands. However, a new study in Conservation Biology shows that some long-lived animals may not need so many individuals to retain a stable population.

(12/26/2012) Thousands of species were described for the first time by scientists in 2012. Some of these were ‘cryptic species’ that were identified after genetic analysis distinguished them from closely related species, while others were totally novel. Either way, here are some of the “new species” highlights from 2012.

(06/29/2012) With the death of Lonesome George, the world lost the last member of a subspecies and Ecuador its greatest symbol of the Galapagos Islands, but Fausto Llerena lost his best friend.