In a landmark ruling, Indonesia’s Constitutional Court has invalidated the Indonesian government’s claim to millions of hectares of forest land, potentially giving indigenous and local communities the right to manage their customary forests, reports Mongabay-Indonesia.

In a review of a 1999 forestry law, Indonesia’s Constitutional Court ruled [PDF – Indonesian] that customary forests should not be classified as “State Forest Areas”. The move is significant because Indonesia’s central government has control over the country’s vast forest estate, effectively enabling agencies like the Ministry of Forestry to grant large concessions to companies for logging and plantations even if the area has been managed for generations by local people. In practice that meant ago-forestry plots, community gardens, and small-holder selective logging concessions could be bulldozed for industrial logging, pulp and paper production, and oil palm plantations. In many cases, industrial conversion sparked violent opposition from local communities, which often saw few, if any, benefits from the land seizures.

The move was prompted by a request for review by National People’s Indigenous Organization (AMAN), which represents indigenous people across the sprawling archipelago. AMAN estimates that the ruling affects 30 percent of Indonesia’s forest estate or 40 million hectares (154,000 square miles).

“About 40 million indigenous people are now the rightful owners of our customary forests,” said Abdon Nababanm, AMAN’s Secretary-General, in a statement. 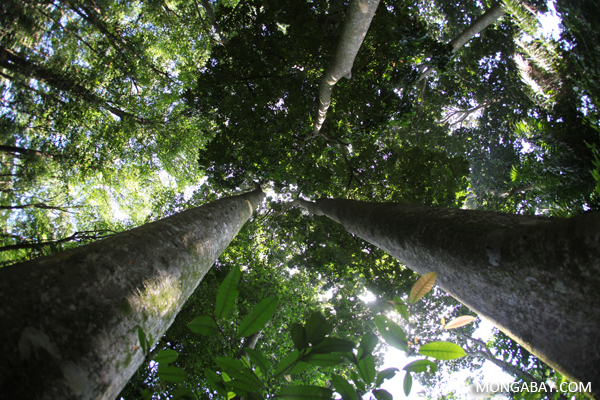 Forest in Java. Photo by Rhett A. Butler

The ruling is a potential blow to the Ministry of Forestry, which has used its massive land bank to accumulate substantial revenue and political power in recent decades.

However the full implications of the ruling are still unknown. A senior Ministry of Forestry official told AFP that the area of “customary forest” was far smaller than 40 million hectares and that implementation could take years to move through the various levels of government.

Martua Sirait, a researcher from the International Centre for Research in Agroforestry (ICRAF), agreed that the next steps will be complex.

“It is still unclear yet how conflict between customary communities and private sector [companies] that received permits from the Ministry of Forestry or local government will be resolved,” Martua told Mongabay.com. “But the court decision strengthened the customary community in mediation and in front of court, if a case brought to the court. It will prevent customary communities from being criminalized for entering their forest.”

“In the future the Ministry of Forestry or the local government cannot release a permit in an area that is classified as privately-owned forest and customary forest without a Free, Prior Informed Consent (FPIC) process,” Martua continued. “For conservation areas, I believe this will open the window for customary community-based conservation management systems and close collaboration between the Ministry of Forestry and customary communities.”

Martua added that the decision could eventually reduce social conflict over forestry permits in Indonesia. According to the National Forestry Council, conflicts over forest management currently involve nearly 20,000 villages in 33 provinces throughout Indonesia. The rights to more than 1.2 million hectares is in dispute. 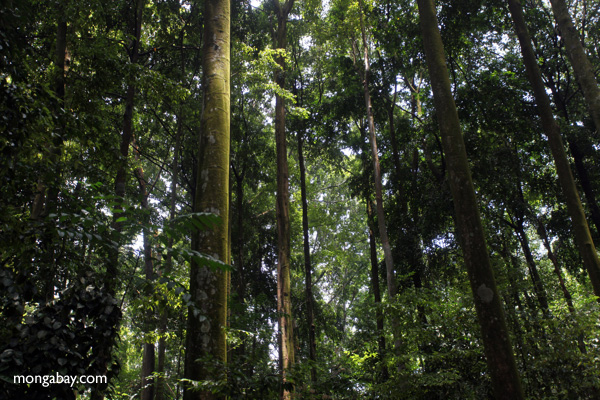 Forest in Java. Photo by Rhett A. Butler

The court decision was cheered by environmentalists and indigenous rights groups.

“For more than 40 years, indigenous peoples of Indonesia have been marginalized, impoverished and criminalized due to lack of recognition of indigenous rights that led to lasting tenurial conflicts,” said Mardi Minangsari, a forest campaigner at the Environmental Investigation Agency (EIA). “The judicial review filed by AMAN (Indigenous Peoples’ Alliance of the Archipelago) is one effort to reclaim the rights of indigenous peoples in Indonesia.”

“The court has found the forestry laws provisions unconstitutional,” Abdon continued. “The state cannot expel us from our customary forests that have been our source of livelihoods for generations.”

Indonesia has one of the highest rates of forest loss in the world. Industrial activities — notably logging, conversion for timber and oil palm plantations, and mining — are a major driver of deforestation, especially in Indonesian Borneo (Kalimantan), Sumatra, and Indonesian New Guinea (Papua and West Papua). However forest recovery has been observed some areas where communities have been granted land tenure. For example, the island of Java — where community forests are rapidly expanding — now has more forest than it had a decade ago. 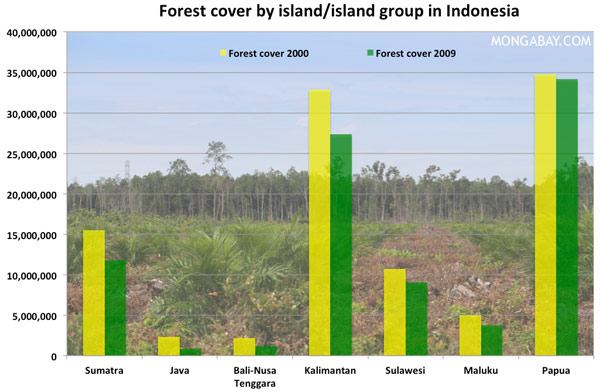 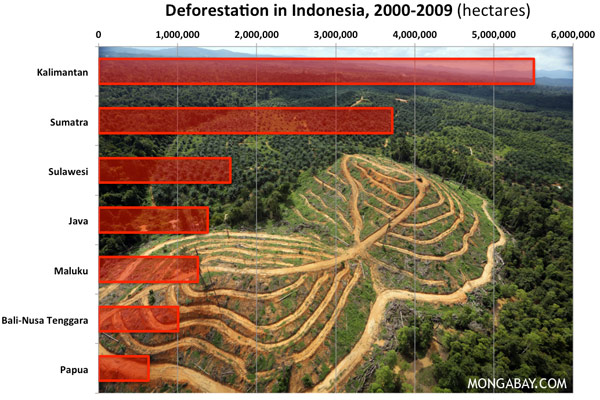 (05/16/2013) Indonesia’s President Susilo Bambang Yudhoyono made a bold and courageous decision this week to extend the country’s forest moratorium. With this decision, which aims to prevent new clearing of primary forests and peat lands for another two years, the government could help protect valuable forests and drive sustainable development.

(05/09/2013) A new UN report exposes serious flaws in Indonesia’s forest governance, serving as a wake up call to policy makers aiming to conserve forests in the country, which boasts the third largest area of tropical forest coverage in the world. On Monday, the United Nations Development Programme (UNDP) together with the Government of Indonesia launched a comprehensive forest governance index, which evaluates forest governance at the central, provincial and district levels and offers policy recommendations designed to better equip the country to conserve forests and peatlands.

(03/14/2013) Providing high quality healthcare to communities around a rainforest park in Indonesian Borneo may be helping reduce chronic illegal logging, suggests a new assessment published by a conservation group. The five-year impact assessment published by Indonesia-based Alam Sehat Lestari (ASRI) is based on surveys of nearly 1,500 households and 6,345 people living around Gunung Palung National Park in West Kalimantan. The study compares key health, economic, and conservation indicators to a baseline survey taken in 2007, prior to the launch of the project.

(07/22/2012) Indonesia’s moratorium on new forestry concessions was proposed in 2010 under an agreement with Norway to reduce emissions from deforestation and peatlands degradation. Set to begin Jan 1, 2011, the moratorium was not defined until May 2011 due to battles over what lands would be included. The moratorium was originally expected to include all forest areas, but lobbying by industrial sectors led to significant weakening, resulting in only peatlands and primary forests being included in the moratorium, with loopholes for mining and some energy and food crops.

(11/01/2011) A palm oil company has forcibly evicted an indigenous community from one of the last tracts of rainforest near Jempang in Indonesia’s East Kalimantan province on the island of Borneo, reports Telapak, a group that advocates community forest management.

(07/12/2011) Indonesia will ‘recognize, respect and protect’ the rights of traditional forest users, including indigenous people, as it works to slow deforestation, reports the Rights and Resources Initiative, a coalition of NGOs.