A small, boneless creature, that lives underground, with a “hundred” legs, and a rather powerful sting; some of these creatures are drab, but some are so beautiful and brightly colored that they can startle. Centipedes.

There is more to a centipede than its many legs, and its habit of darting out of dark places. One of the first lifeforms to turn up on land, some centipede fossils date back to about 450 million years ago. They have been evolving steadily since, with some estimates showing about 8,000 species today. Not even half of these species have been taxonomically described.

Jahnavi Joshi and Praveen Karanth from the Centre for Ecological Sciences at the Indian Institute of Science have been working on describing Indian centipedes. The distinctive evolutionary history of the Indian subcontinent, the rich diversity of habitats, and the nature of centipedes to not move around too much have resulted in an incredible diversity of centipedes in India.

To understand the issue better, we need to go back to about 300 million years ago, when all the landmasses in the world were joined together to form a “supercontinent” called Pangaea. When Pangaea split up, it formed two sub continents: Laurasia, made of the more northern continents of today, North America and Eurasia; and Gondwana, which was an amalgam of the more southern continents – Africa, Madagascar, South America, Australia, Antarctica, the Arabian peninsula and the Indian subcontinent.

Well, Gondwana ended up splitting as well, rather violently with massive volcanic eruptions, 184 million years ago. We must remember that centipedes were already around during the Pangaea days, and some of the centipedes from India are related to species in Africa because of this very early connection. 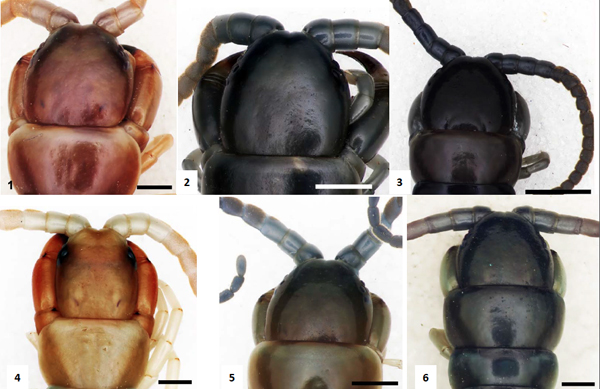 All centipedes live underground, and hunt around in the dark, during the night. They use their poison to kill small underground creatures before eating them. A lot of the centipedes have very distinct appearances.

“A lot of them are brightly colored, like electric blue, red, green and orange; some of them even look like spiders,” says Jahnavi Joshi.

But, some groups of centipedes look exactly the same. Since the legs, sting and body shape are all used for a similar purpose, a lot of very different species end up having very similar external “morphological” characters. Their stealth and weaponry is useful to the centipede when it is out killing prey, but when they all look similar, it is a challenge to the poor taxonomist studying them.

How do you tell the difference between species when they all look similar? Without an answer to this question, working with a particular taxonomic group can become difficult. Giving a name to a well-defined group is the starting point of scientific investigation after all.

The most favored solution to the problem is to look at evidence from a lot of sources. Find out the sequence of particular stretches of DNA. Look at the specific habitat the species lives in (the temperature, rainfall, etc). And, examine the creature under the microscope, trying to pin point differences that may not be obvious to the naked eye.

This procedure of looking at multiple lines of evidence is called “integrative taxonomy,” which is what Joshi and Karanth decided to do with their centipedes.

Putting the Pieces Together

To start off, the scientists searched southern India thoroughly for centipedes. They concentrated on searching the Western Ghats, a mountain range parallel to the west coast of India, which is one of the biodiversity hotspots of the world. The evolutionary link with Gondwana, and the sheer number of habitat types, makes this area special—high numbers of different species, many found no-where else, and a whole lot of new species described recently.

Once Joshi and Karanth had a sizable number of individuals, they sequenced specific parts of DNA, and followed-up with analysis to see which individuals were related. Such an analysis results in a branching diagram that groups similar individuals together, called a “phylogeny”—something like a family tree.

The Indian centipede family tree showed that a particular group of centipedes always stuck together—a group from the genus Digitipes. All male centipedes from this genus have an outgrowth on their leg bone, in the last pair of legs. Africa has three species from this genus. According to the one study on centipedes in 1984, southern India has is home to three Digitipes species.

When examining the Digitipes family tree from DNA sequences, Joshi and Karanth could see NINE distinct groups, or “lineages”—not three. These nine lineages formed the starting point for further investigation. The next step was to see if other lines of evidence that make or break a species supported these new lineages: preferred climate conditions and external appearance.

The latitude and longitude of the locations from where each individual was collected can be used in gathering information about the preferred climate. Using the information of known climate preferences, we can then predict where species can be found. This is called “niche modelling.” It is a pragmatic approach, because now the researchers are not limited by where they travelled searching for centipedes. Maps showing where we can expect to find centipedes from a particular lineage suddenly can be drawn.

Finally, we come to how the individual looks—the morphology. Not only something as simple as color or the number of legs, but a detailed analysis of attributes that many people would miss. Joshi started with eleven relatively simple characters—like the number of partitions in the antenna, and whether a particular leg has an outgrowth. Using these characteristics, they drew up a morphology family tree.

Now, the researchers were in a position to weave all the evidences together to get at the real picture. They started with the nine species suggested by the molecular family tree, and checked what the niche models and the morphology family tree had to say.

Three species were those described by the earlier study—Digitipes barnabasi, D. coonoorensis and D. indicus. Of the remaining six lineages, five were held up as new species. Three among these five look exactly the same to the naked eye.

To delve deeper into the differences between these apparently similar species, Jahnavi Joshi went on to collaborate with Greg Edgecombe from the Natural History Museum in London, a world renowned expert on centipede taxonomy. Together, they examined the centipedes Joshi collected in India.

Using a camera attached to a powerful microscope, they were able to support some of the new species proposed by the integrated approach explained above.

“We revised Digitipes species for the Western Ghats,” explains Joshi.

So, looking beyond the hundred legs has revealed a lot more than expected. Think about this: we just spoke about one small group of small invertebrates. Zoom out a little, and think of the number of such undiscovered species in the Western Ghats. Now zoom out some more, and think of the world.

Next time a centipede makes a dart out of the dark, think that it has been around a whole lot longer than you and me. Admire it, and let it go its way, as long as it’s not too close for your comfort. 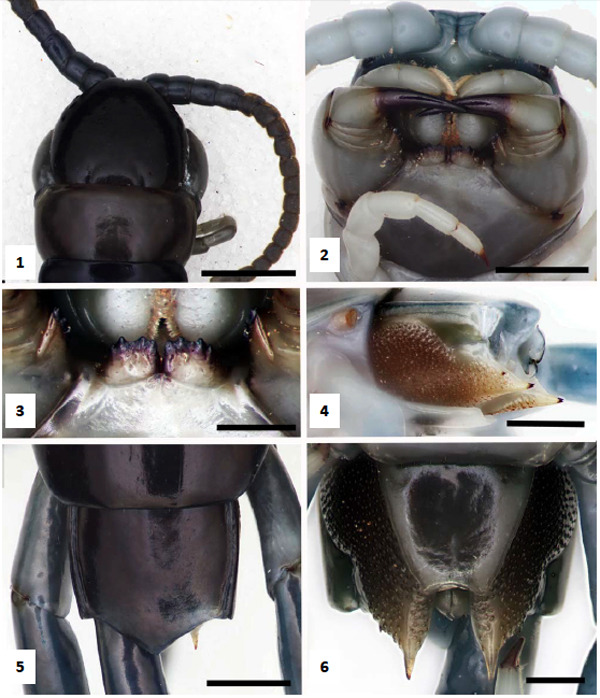 What makes a centipede? Diagnostic characters of Digitipes jonesii. 1. antennae and head, 2. mouthparts, 3. a close-up view of teeth, 4. base of one leg, 5. a section of the body (a segment) from which legs emerge, 6. base of another leg. Photo by: Joshi et al.

(04/03/2013) Searching through materials at the Natural History Museum in Paris, Simon van Noort recently came across a long-neglected field box of wasp specimens. Collected 80 years earlier by André Seyrig in Madagascar, the box contained several specimens of wasp in the Paramblynotus genus. The big surprise: wasps in this genus had never before been seen in Madagascar.

(01/14/2013) Cordyceps sinensis, commonly known as caterpillar fungus, may be a groundbreaking new treatment for a number of life-threatening conditions including asthma, kidney failure and cancer according to a paper recently published by The RNA Society. If you’re a caterpillar of the Tibetan Plateau, the fungus Cordyceps is your worst nightmare. It hits you when you’re most vulnerable, during hibernation. You can try to stay awake, but on the Tibetan plateau, which reaches −40 degrees Celsius during the winter, you’ll have to hibernate sooner or later, and the fungus will be waiting for you.