Rising agricultural profitability due to higher prices, improved crop productivity, and forest conservation itself could make it increasingly difficult for conservation programs tied to payments for ecosystem services to succeed, warns a study published this week in the journal Proceedings of the National Academy of Sciences.

The prediction is based on a model that forecasts the potential impact of agricultural intensification on small farmers’ behavior in the Democratic Republic of Congo (DRC). Whereas subsistence farmers may now accept a pittance for abandoning low-yielding agriculture, in the future, higher-yields from improved genetic stock (including genetically modified crops), increased fertilizer use, and better farming practices would necessitate far higher payments to persuade farmers to keep forests standing. In other words, a program that compensated farmers based on the carbon stored in forests — like the nascent Reducing Emissions from Deforestation and Degradation (REDD+) mechanism — would have difficulty competing against increasingly industrialized agriculture.

“Our research suggests that as agriculture becomes more intensive, the small payments successful at incentivizing forest conservation today could increase to well beyond what is considered economically efficient, or even feasible,” said study lead author Jacob Phelps of the National University of Singapore. “We anticipate that similar patterns are likely across the tropics, including in places like Indonesia.” 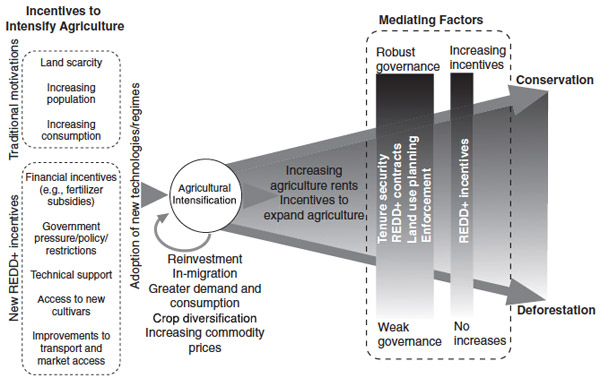 The results add weight to arguments made elsewhere. For example, Greenpeace and the Rainforest Foundation UK both cited the issue in their criticism of McKinsey’s cost curve for mitigating greenhouse gas emissions from deforestation. The activist groups said that REDD+ wouldn’t compete be able to financially with industrial activities, including large-scale commercial agriculture and mining, and thereby fail to address major drivers of deforestation. Several studies also suggested that financial returns from REDD+ would not be sufficiently high to compete with palm oil production, which is one of the most profitable forms of land use in the tropics. One paper even argued that REDD+ could undermine less yield-oriented forms of agriculture like organic farming.

In the PNAS study, Phelps and colleagues found that financial break-even points for REDD+ versus cassava and maize cultivation in DRC would require higher and higher carbon prices as crop productivity increased.

Subistence agriculture like this in Suriname may be cheap to stop now, but as farming becomes more industrialized like the oil palm plantation in Borneo below, it will be increasingly costly to discourage.

The study seems to highlight the risk that while a program like REDD+ could work in the short-term while crop prices and yields are moderate, it may fail to protect forests in the long-run when prices and yields are higher. The authors add that forest conservation initiatives could even have a perverse impact if they focus on intensifying agricultural production.

While illustrative, the study does come with some important caveats when evaluated on a scale beyond DRC. For one, it doesn’t directly account for the likelihood that higher profitability could encourage expansion into non-forest areas like degraded lands. Brazil and Indonesia both boast tens of millions of hectares of such lands. It also excludes the value of forest products — timber, food, and other non-wood forest products — that might continue to be available to local communities under REDD+ programs. Nor does it factor in potential payments for other ecosystem services (PES) like water and biodiversity. Nonetheless the research does raise significant points of consideration for the design of REDD+ and other PES schemes.

(06/08/2011) Strategy plans for implementing programs to reduce emissions from deforestation and forest degradation (REDD) are failing to provide details on how they will address forest conversion for agriculture, which in most countries is a major driver of deforestation, argues a new report from the CGIAR Research Program on Climate Change, Agriculture and Food Security (CCAFS) and Lexeme Consulting.

(04/07/2011) One of the world’s top consultancies, McKinsey & Co., is providing advice to governments developing ‘Reducing Emissions from Deforestation and Degradation’ (REDD+) programs that could increase risks to tropical forests, claims a new report published by Greenpeace. The report, Bad Influence – how McKinsey-inspired plans lead to rainforest destruction, says that McKinsey’s REDD+ cost curve and baseline scenarios are being used to justify expansion of industrial capacity in Indonesia, Papua New Guinea, Democratic Republic of Congo, and Guyana.

(01/02/2011) In efforts to save the world’s remaining rainforests great hopes have been pinned on “degraded lands” — deforested lands that are presently sitting idle in tropical countries. Optimists say shifting agriculture to such lands will help humanity produce enough food to meet growing demand without sacrificing forests and biodiversity and exacerbating social conflict. But to date, degraded lands remain an enigma, especially in Indonesia, where deforestation continues at a rapid pace. Degraded lands are often misclassified by various Indonesian ministries—land in a far-off province may be listed as “wasteland” by Jakarta, but in reality is blanked by verdant forest that sequesters carbon, houses wildlife, and affords communities with food, water, and other essentials. Granting logging and plantation concessions on these lands can result in conflict and environmental degradation.

(09/02/2010) More than 80 percent of agricultural expansion in the tropics between 1980 and 2000 came at the expense of forests, reports research published last week in the early online edition of the Proceedings of the National Academy of Sciences (PNAS). The study, based on analysis satellite images collected by the United Nations Food and Agricultural Organization (FAO) and led by Holly Gibbs of Stanford University, found that 55 percent of new agricultural land came at the expense of intact forests, while 28 percent came from disturbed forests. Another six percent came from shrub lands.