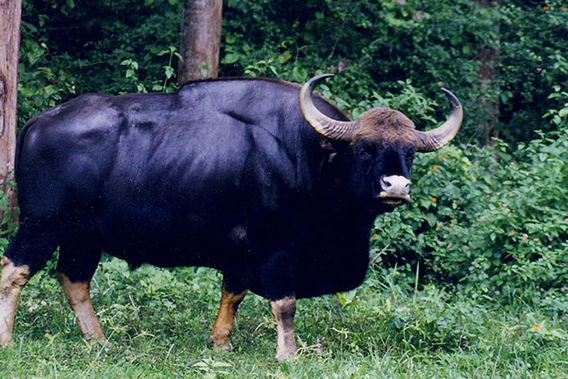 Gaur (Bos gaurus gaurus) is one of the large wild ungulates of Asian jungles. It is the tallest living ox, and one of the four heaviest land mammals (elephant, rhino and wild buffalo are the other three), weighing up to 940 kilograms (2,070 pounds) and standing between 1.6 and 1.9 meters (5.2 to 6.2 feet) at the shoulder. Gaur were once distributed throughout the forested tracts of India and South Nepal, east to Vietnam and south to Malaya. Today, however, they are confined to just over a hundred existing, and 27 proposed, Protected Areas in India. It is listed in Appendix I of the Conservation on International trade in Endangered Species of Wild Fauna and Flora (CITES), and categorized as Vulnerable by the International Union for Conservation of Nature and Natural Resources (IUCN).

As local populations of guar vanish, conservationists have taken to re-introducing the species, such as in Bandhavgarh Tiger Reserve in 2011. A new paper in mongabay.com’s open access journal Tropical Conservation Science examines the outcome of the reintroduction program. The last small population of gaur (30 to 32 individuals) migrated out of the Bandhavgarh Tiger Reserve in 1995. This population was considered to be the only population north of the Narmada River, in Central India.

“As ecosystem landscapers, gaur play an important role in the moist and dry deciduous forests in India, as they have a major impact on the physical structure of habitats, rates of ecosystem processes and the diversity of communities,” the researchers write in the paper. “Since the Bandhavgarh Tiger Reserve also has a considerable population of tigers, it was important to have gaur in the park as a prey species of tiger.”

Nineteen gaur (14 females, 5 males) were captured from Kanha Tiger Reserve and translocated to the Bandhavgarh Tiger Reserve in 2011. Of these, 12 were fitted with radio collars, allowing researchers to study the home range, habitat use and food habits of individuals.

The known extinction of gaur from three protected areas in India (Thattakad Wildlife Sanctuary, Bhandhavgarh Tiger Reserve and Kanger Valley National Park,) in the last two decades shows the plight of this species and the urgent need for measures to stem further losses.

“The present study takes a successful step towards the conservation of this large bovid, providing first-time information on ranging patterns of gaur and their degree of preferences for different vegetation and terrain types in different seasons,” the scientists write.

With such information now at the park administration disposal scientists were able to release a further 31 gaur taking with the estimated viable population to 50 individuals.