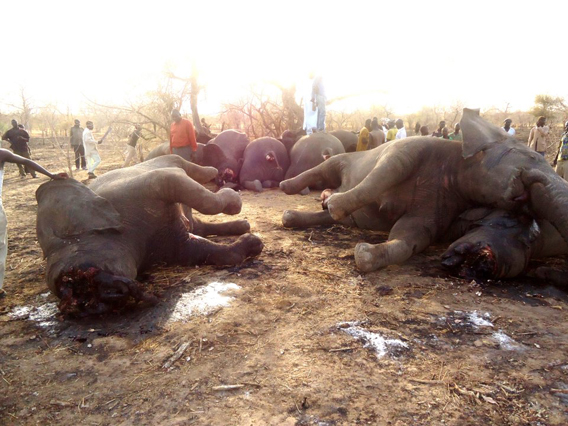 A scene of terror: the bodies of 89 elephants were found in Chad following a massacre by poachers. Photo courtesy of SOS Elephants in Chad.

In what is being called the worst elephant massacre in Africa this year, poachers have recently killed as many as 89 elephants in Chad. Stephanie Vergniault, the Chairman of SOS Elephants in Chad, says the elephants were slaughtered in a two-day period late last week near Tikem, on the southwest border of Chad and Cameroon. At least 30 of the elephants were pregnant. Images from a television news report show what appear to be an elephant still connected to its umbilical cord on the ground. Separately, 12 calves were also slaughtered.

Vergniault was informed of the massacre by her Chad-based staff as well as government officials. The poachers, suspected to be Sudanese or Chadian, were heavily armed and on horseback. Vergniault says as many as 50 poachers were involved in the massacre. Large numbers of poachers had been spotted in Chad in January; Chad’s Minister of Environment was reportedly informed about their presence at that time. Vergniault says the poachers are now heading to an area closer to the border of Cameroon where she says an upwards of 800 elephants remain unprotected.

Celine Sissler-Bienvenu, Director of France and Francophone Africa for the International Fund for Animal Welfare (IFAW) says that local communities had been asking Chadian authorities for help in resolving local elephant conflict. However, no support was provided “which may be why the elephant massacre was not reported for some days. The killing of the elephants by poachers may have been seen as offering some sort of relief to local farmers who are unable to protect their crops and livelihoods randomly being damaged by elephant herds simply looking for food.” Sissler-Bienvenu says the area in which the elephants were killed—like many areas in Chad where elephants roam—was not protected.

Nicole Mollo, US-based Director of Operations of African Parks, a non-profit organization which rehabilitates and reinforces struggling national parks, says the slaughter near Tikem is, unfortunately, “very typical of the trend we are seeing and will continue to see until all of Africa’s elephants are gone—unless our methods of protection change. [As it pertains to current conservation practices], the status quo is not working.”

It is unclear where the poachers are at this time. There are no reports of any arrests. Chad authorities have denounced the massacre, which comes on the heels of a recent slaughter of elephants in Cameroon, which left 28 elephants dead.

The ivory from the elephants will most likely be illegally exported to Thailand or China, where it is used to make jewelry, figurines, and souvenir trinkets.

China is one of eight nations currently put on a “watch list” at CITES (Convention for International Trade in Endangered Species), which recently ended its global summit. CITES asked these countries—including Thailand, Vietnam, Philippines, Malaysia, Kenya, Tanzania, and Uganda—to submit detailed plans on how they will stop the current ivory trade. Progress must be made by 2014.

Other countries, however, like Cameroon, Democratic Republic of Congo (DRC) and Chad, did not get highlighted by CITES, although this is where a most significant amount of poaching in Africa occurs. A number of conservation organizations found CITES steps wholly inadequate; Rosalind Reeve with the David Shepherd Wildlife Foundation said, “Its failure to combat the fundamental driver of the killing amounts to gross international negligence.” 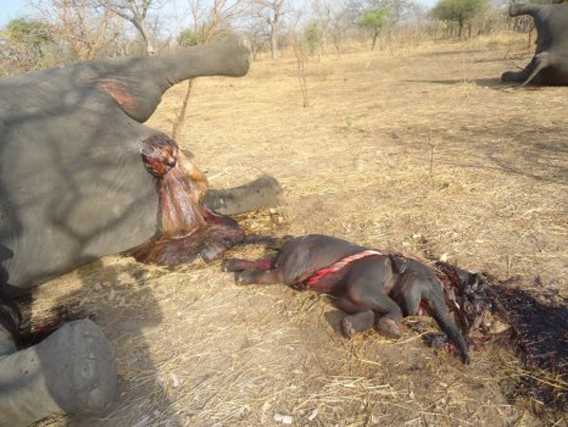 Dead mother with calf still attached to umbilical cord. The Chairman of SOS Elephants Chad, Stephanie Vergniault, told mongabay.com that this calf was likely born during the shooting attach by poachers only to perish. Photo courtesy of SOS Elephants in Chad. 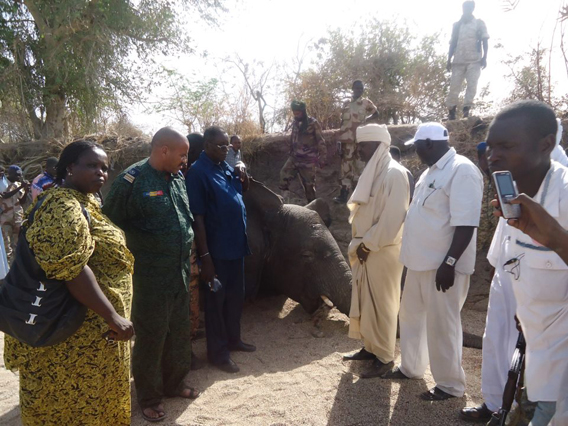 Officials stand next to the body of slaughtered elephant, one of some seven dozen. Photo courtesy of SOS Elephants in Chad.