Cambodia loses half its seasonal wetlands in 10 years

Cambodia lost more than half of its seasonally flooded grasslands in ten years due to industrial agricultural conversion, abandonment of traditional farming, and illegal drainage, putting several endangered bird species at risk and undermining traditional livelihoods in the region, reports a new study published in the journal Conservation Biology.

The research is based on aerial photographs, land cover maps, and ground surveys. It found that the grassland area around the Tonle Sap, Southeast Asia’s largest freshwater lake, declined from 3349 square kilometers in 1995 to 1817 sq km by 2005. Since then, a key expanse in the southeast of the Tonle Sap floodplain declined by a further 19 percent.

“The loss of this entire ecosystem from Southeast Asia is imminent without immediate intervention. In 2009 only 173 km² of grassland were under some form of protection, but by 2011 even these protected areas were shrinking – with 28 per cent lost to intensive cultivation,” said lead author Charlotte Packman from the University of East Anglia in a statement.

“Flooded grasslands in Thailand and Vietnam have already been almost completely lost. Only a strong political commitment to protection and restoration can prevent the impending loss of the last major flooded grassland in Southeast Asia.” 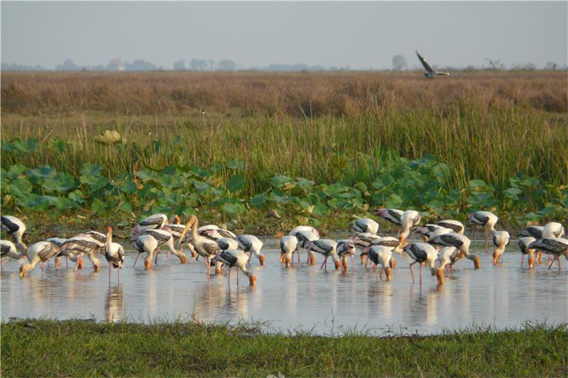 “Rural communities have been left vulnerable to land-grabbing and privatisation of -communal grasslands. Traditional, low-intensity use of the grasslands by these communities, such as burning and cattle-grazing, help to maintain the grasslands and prevent scrubland from invading,” explained Packman.

“Intensive commercial rice production by private companies, involving the construction of huge channels and reservoirs for irrigation, is denying local communities access to the grasslands on which their livelihoods depend and destroying a very important habitat for threatened wildlife.

Packmansays that since 2005 industrial rice expansion has become the biggest threat to the wetlands.

“Between 1995/1996 and 2005, the encroachment of scrubland was the major cause of grassland loss, due to a reduction in traditional, low intensity agricultural practices in the grasslands. Since 2005, intensive rice cultivation by private companies has rapidly become the most serious threat to these grasslands, destroying huge areas at a very alarming rate.”