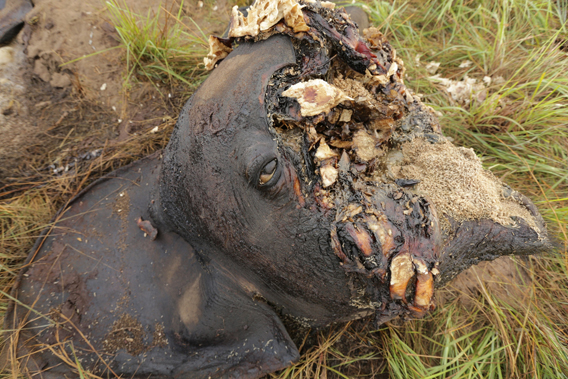 Surveys in Gabon’s Minkebe National Park have revealed rare and hard data on the scale of the illegal ivory trade over the last eight years: 11,100 forest elephants have been slaughtered for their tusks in this remote protected area since 2004. In all, poachers have cut down the park’s elephant population by two-thirds, decimating what was once believed to be the largest forest elephant population in the world.

“Without a global commitment, great elephant populations will soon become a thing of the past,” the president of the Wildlife Conservation Society (WCS), Cristián Samper, said. WCS helped conduct the surveys along with WWF and Gabon’s National Parks Agency, the ANPN. “We believe that elephants can still be saved—but only if nations greatly increase their efforts to stop poaching while eliminating the illegal ivory trade through better enforcement and reduced demand.”

While Africa’s savanna elephants (Loxodonta africana) have often been the focus of media reports on poaching, it’s the continent’s forest elephants that have been hit hardest. Recent studies have argued that forest elephants (Loxodonta cyclotis)—which are smaller and sport straighter tusks than the more widely known savannah elephants—are in fact a distinct elephant species, and not just a subspecies. Forest elephants are found largely in the Congo, where political instability, poverty, corruption, and a lack of law enforcement have made poaching even easier.

Poaching has escalated in Minkebe according to authorities. In 2011, a camp in the buffer zone of Minkebe containing 300 gold miners exploded to 5,000 people, including miners, poachers, as well as arms and drug dealers. Officials believe that 50-100 elephants were being killed every day during this time. Many of the poachers are believed to be coming across the border from Cameroon.

Gabon has since upped its efforts to combat the runaway poaching, including recent seizures and arrests. Ali Bongo Ondimba, the president of Gabon, has proposed legislation that will increase prison time for unaffiliated poachers to a minimum of three years and 15 years for those connected to organized criminals.

“Over the last three years we have deployed 400 additional parks staff, 120 soldiers and 30 gendarmes in our fight to stop illegal killing of elephants for the black market ivory trade. Despite our efforts we continue to lose elephants every day,” Lee White, the head of the ANPN said, adding, “If we do not turn the situation around quickly the future of the elephant in Africa is doomed.”

The illegal ivory trade has exploded due to demand from China and parts of Southeast Asia. A recent investigative report in National Geographic, entitled Ivory Worship, argued that much of the ivory is being made into religious handicrafts, particularly for Catholics and Buddhists. Demand from East Asia is also decimating rhino populations, which are poached for their horns.