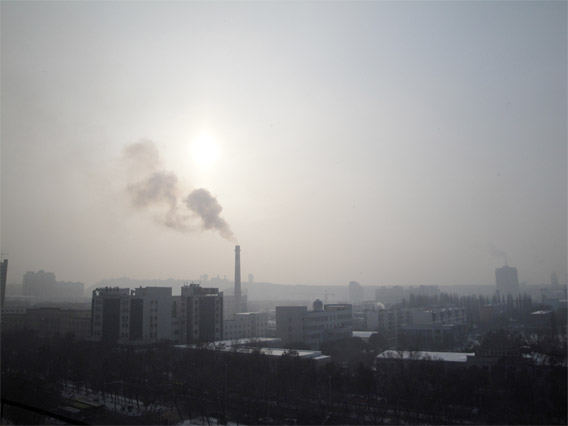 Nitrogen deposited on land and water in China increased 60 percent annually from the 1980s to the 2000s due to rising use of fertilizer, growth in livestock production, increased coal burning, and a sharp rise in car ownership, reports a study published last week in the journal Nature.

The findings, which come as Beijing battles choking air pollution, are based on analysis of data from nitrogen deposition from monitoring sites throughout China. Overall, average annual bulk deposition of nitrogen increased from 13.2 kilograms of nitrogen per hectare in the 1980s to 21.1 kg in the 2000s.

According to the paper, the increase in nitrogen deposition is linked to a number of environmental problems, including air and water pollution, soil and water acidification, increased greenhouse gas emissions, and biodiversity losses. The rate of nitrogen deposition in parts of China is now higher than ever observed at a regional scale in the United States.

“These levels are much higher than those observed in any region in the United States, and are comparable to the maximum values observed in the United Kingdom and the Netherlands when N deposition was at its peak in the 1980s,” the authors write, adding that the U.S. and Western Europe have since moved to reduce nitrogen pollution due to its high costs to society.

“The human and environmental costs associated with anthropogenic reactive nitrogen are well recognized, and active measures in Western Europe and North America have stabilized or reduced reactive nitrogen deposition in those regions. Even so, very large costs of excess reactive nitrogen have been reported in the European Union (€70–320 billion per year) and the United States,” they write. “In contrast, over the past 30 years China’s emissions have increased to the point that it has become by far the largest creator and emitter of reactive nitrogen globally.”

The authors attribute the rise in nitrogen pollution to China’s rapid rate of economic growth. During the study period, the use of nitrogen-based fertilizers grew threefold, while livestock numbers and coal combustion increased fourfold, and the number of automobiles jumped more than twenty-fold. Much of the nitrogen used as fertilizer goes to waste.

“All these changes can be linked to a common driving factor: strong economic growth, which has led to continuous increases in agricultural and non-agricultural reactive nitrogen emissions and consequently increased nitrogen deposition,” they write. “Clearly, nitrogen deposition has increased significantly in China and has affected both non-agricultural and agricultural ecosystems. So far, China’s economic growth model has relied mainly on the consumption of raw materials, and it has caused large anthropogenic reactive nitrogen emissions in addition to other environmental perturbations.”

The authors conclude that China needs be more aggressive about improving nitrogen efficiency. Failure to do so could undermine the long-term health of its people and economy.

“It is time for China and other economies to take action
to improve N-use efficiency and food production in agriculture and
reduce Nr emissions from both agricultural and non-agricultural
sectors. These actions are crucial to reducing N deposition and its
negative impact locally and globally.”