In an unusually bold statement catalyzed by the deaths of 14 rare elephants, six Malaysian NGOs today called on the Sabah state government to pursue “a more conservation focused agenda” in managing the state’s forests. 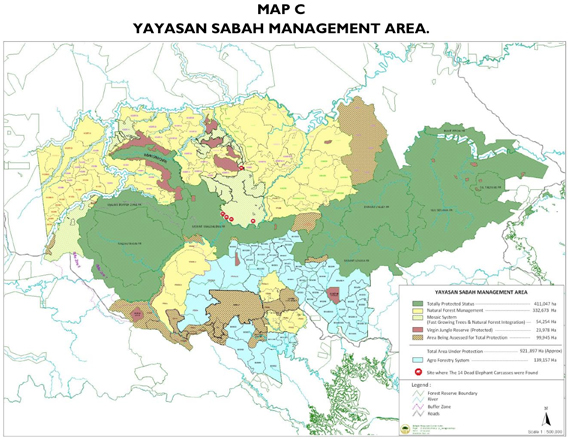 “The recent tragic deaths of at least 14 Borneo pygmy elephants is a wake-up call for us all in Sabah,” read the statement issued by the Borneo Rhino Alliance (BORA), the Danau Girang Field Centre, HUTAN, Land Empowerment Animals People (LEAP), The Royal Society SE Asia Rainforest Research Program (SEARRP), and WWF-Malaysia. “Despite the best efforts of the Sabah State Government in establishing protected areas and implementing sustainable practices, the current forest conversion plans might be accelerating the loss of biodiversity and particularly threaten the lowland and flat land habitats that are critically important for the conservation of elephants and many other rare and/or iconic species.”

“The intense media, civil society and international scrutiny of the elephant issue serves as a timely reminder for the Sabah State Government to pursue a more conservation focused agenda with respect to forest conservation in the state,” continued the statement. “We are willing partners of the government in this transitionary process.”

The statement is unusually bold for Malaysian conservation NGOs, which typically don’t confront the government. Nonetheless the chief minister responded positively to the recommendations, according to a joint press release issued by his office and the environmental coalition.

“I take note of your recommendations. Actually some of the steps have been taken or are in the process of implementation” Musa said. “We will study the rest in further detail to see their viability and we are also keen to work with you in seeing the recommendations through.”

Sabah, the eastern-most state in Malaysian Borneo, lost most of its old-growth lowland forest cover since the 1970s. About a fifth of the state’s land mass has been converted to oil palm plantations, while most of its remaining natural forest is heavily degraded by logging. Yet the state has moved aggressively in recent years to protect high conservation value forest that survives within the million-hectare Yayasan Sabah concession, a zone that was originally intended to be managed into perpetuity for the benefit of all Sabahans but was instead largely decimated by overharvesting. However Yayasan Sabah still contains some of the last tracts of primary lowland forest on the island of Borneo, which has suffered from large-scale forest degradation and conversion.

Within the most heavily degraded parts of Yayasan Sabah, where commercial timber resources are so stripped that logging is no longer financially viable, the Sabah Forestry Department is encouraging better management practices in hopes that stocks can eventually recover. Should forests regenerate and be restored, the long-term plan is to selectively log these areas under FSC standards. In areas already planted with acacia and oil palm, the government is pushing for plantations to meet certification standards to distinguish them from plantations on newly deforested lands. The coalition of NGOs is now asking for the government to accelerate and codify this process as well as other moves in response to the elephant deaths.

“We want to take the crisis to address the systemic issues, and we worked hard to come up with a three point call to action, which we were able to personally hand over to the Sabah Chief Minister,” LEAP Executive Director Cynthia Ong. “The Chief Minister was positive, and said the State will require our help in realizing what we have proposed.”

(01/31/2013) Wildlife officials in the Malaysian state of Sabah have found the bodies of 14 Bornean elephants in Gunung Rara Forest Reserve, and suspect that more may be found dead. While tests are pending, they believe the elephants were likely poisoned due to damage in the animals’ digestive tracts. Only around 2,000 Bornean elephants (Elephas maximus borneensis) are left on the island of Borneo with the vast bulk found in Sabah.