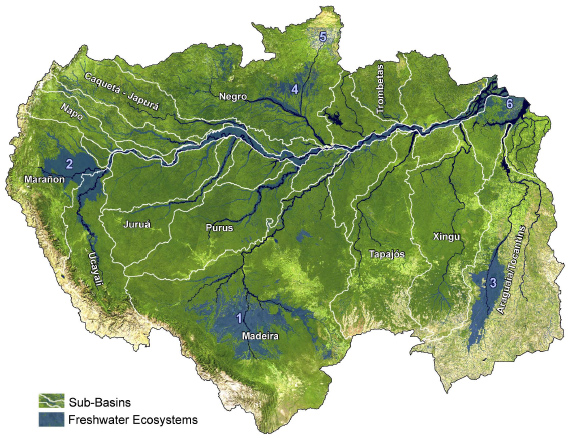 The world’s largest river system is being rapidly degraded and imperiled by dams, mining, overfishing, and deforestation, warns a study published last week by an international team of scientists.

Writing in the journal Conservation Letters, researchers led by Leandro Castello, a research associate at the Woods Hole Research Center, catalog the litany of threats facing the Amazon river and its tributaries. They note that existing terrestrial protected areas may not be enough to protect river ecosystems affected by both upstream and downstream activities, including oil extraction, gold mining, over-harvesting of plants and animals, forest clearing and conversion, and dam-building.

“Existing management policies—including national water resources legislation, community-based natural resource management schemes, and the protected area network that now epitomizes the Amazon conservation paradigm—cannot adequately curb most impacts. Such management strategies are intended to conserve terrestrial ecosystems, have design and implementation deficiencies, or fail to account for the hydrologic connectivity of freshwater ecosystems,” the authors write. “There is an urgent need to shift the Amazon conservation paradigm, broadening its current forest-centric focus to encompass the freshwater ecosystems that are vital components of the basin.” 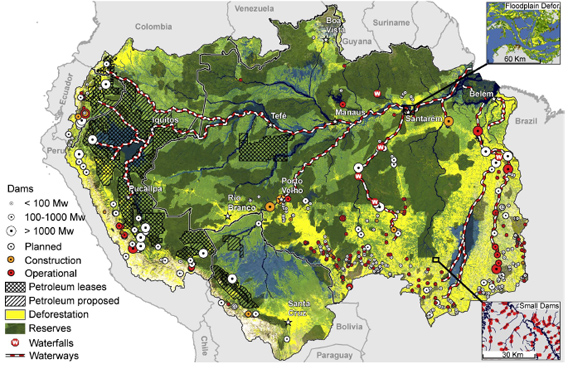 The main drivers of wetland degradation for which basin-wide data are available, and the protected area network. Courtesy of Castello et al (2013).

The authors say a dam-building spree across the Amazon basin is one of the most immediate threats to region’s river ecosystems, potentially interfering with the basin’s hydrological cycle and nutrient flows. Large dams further restrict or block access to breeding and feeding grounds for migratory fish species, while areas inundated with water can generate substantial greenhouse gas emissions and dramatically alter habitats.

“There is a total of 154 hydroelectric dams in operation, 21 in construction, and plans to construct 277 additional dams in the future. There are also thousands of small dams located in small streams to provide water for cattle,” said co-author Marcia Macedo of the Woods Hole Research Center in a statement. “These infrastructure projects, together with deforestation-induced changes to regional rainfall, could fundamentally change the hydrology of Amazon freshwater systems.”

Amazon riverine ecosystems are also suffering from overfishing, which affects the food web as well as human populations that are highly dependent on fish as a source of protein. The study, which notes that “current per capita fish consumption in the Brazilian Amazon averages 94 kg/yr in riverine populations, which is almost six times the world average”, reports that the average body length of the most frequently harvested species have fallen more than 60 percent in the past century. Several species are approaching commercial extinction in some areas.

Meanwhile deforestation is exacerbating the adverse impacts on the Amazon’s rivers. An estimated 56 percent of the floodplains along the mainstream of the lower Amazon were deforested between 1970 and 2008, spurring soil erosion, which alters water quality and clarity and triggers sedimentation. Deforestation can also increase the variability of water levels between the dry and rainy seasons, affecting plant and wildlife communities. 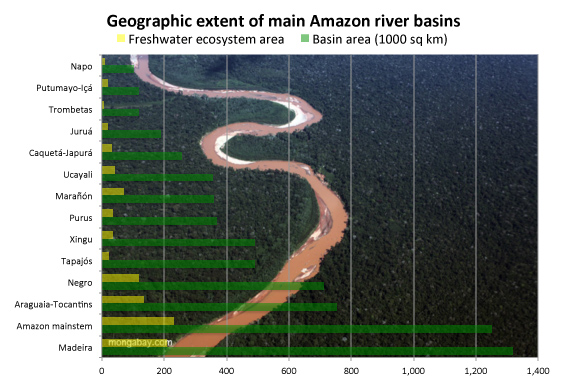 To address these issues, the researchers recommend broadening traditional terrestrial-focused conservation approaches to include aquatic ecosystems. They suggest using existing protected areas as a starting point for the transition, developing an integrated “river catchment-based conservation framework that protects both aquatic and terrestrial ecosystems”. Given that many catchments cross national boundaries, the effort should be transnational in scope.

“There are environmental issues everywhere, but the case with Amazon freshwater ecosystems is different, because no one talks about it. Their problem has been concealed,” said Castello. “Significant strides in Amazon conservation have been on deforestation because deforestation has been studied and monitored year after year. We now need to do the same for these aquatic ecosystems.”

(02/17/2012) Federal public prosecutors in Brazil have challenged a plan to strip protected status from 86,288 hectares of land to make way for five new dams, reports International Rivers. The challenge is set to be heard by Brazil’s Supreme Court.