Controversial research outlines physics behind how forests may bring rain 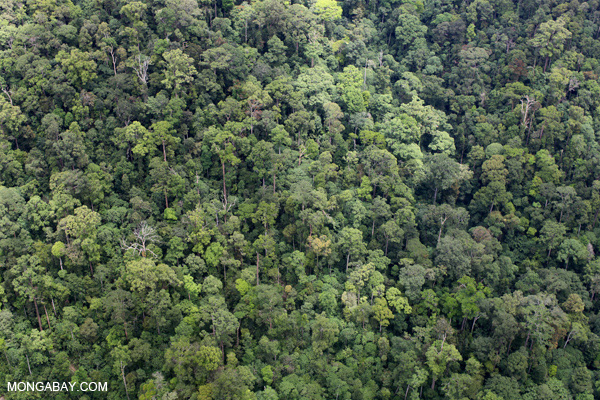 According to a controversial theory, forests—such as this one in Borneo—drive winds bringing rain from the coasts to continental interiors. Photo by: Rhett A. Butler.

It took over two-and-a-half-years for the journal Atmospheric Chemistry and Physics to finally accept a paper outlining a new meteorological hypothesis in which condensation, not temperature, drives winds. If proven correct, the hypothesis could have massive ramifications on global policy—not to mention meteorology—as essentially the hypothesis means that the world’s forest play a major role in driving precipitation from the coast into a continent’s interior. The theory, known as the biotic pump, was first developed in 2006 by two Russian scientists, Victor Gorshkov and Anastassia Makarieva of the St. Petersburg Nuclear Physics, but the two have faced major pushback and delays in their attempt to put the theory before the greater scientific community.

“It is, at first glance, incredible that such a process could be so influential, be based on basic physics, and yet have gone unnoticed for so
long by so many,” says co-author Douglas Sheil who worked with Gorshkov and Makarieva on the new paper. “I shared this view initially, but over time it has withstood a large number of queries and challenges.”

The current paper, entitled “Where do winds come from? A new theory on how water vapor condensation influences atmospheric pressure and dynamics,” outlines the physics behind the new theory. It sparked harsh criticism and long debates—years long—but in the end the journal decided to publish the piece, albeit with a lengthy editor’s note at the end of the paper.

“It is very unusual,” Sheil with Southern Cross University in Australia says of the editor’s note. “Clearly there has been major debate and disagreement. But in science we are generally used to the idea that theories are ideas to be tested, publishing them does not endorse them…it appears that people are less comfortable with that in meteorology and climate studies.”

The editor’s note explains that even though the new theory “has been subject to considerable criticism” they decided to publish “despite the strong criticism from the esteemed reviewers—to promote continuation of the scientific dialogue on the controversial theory.”

The unusual note goes on to state that the decision to publish “is not an endorsement or confirmation of the theory, but rather a call for further development of the arguments presented in the paper that shall lead to conclusive disproof or validation by the scientific community.”

Still, the publication of the paper, even with the editor’s comments, represents a significant victory for Gorshkov and Makarieva’s novel idea, as it means the hypothesis has withstood over two years of scrutiny without being disproved.

“We think that the most important statement in the disclaimer is the explicit call to develop this research further,” Gorshkov and Makarieva told mongabay.com. “We support this call. It is urgent to investigate the climatic role of forests on a coherent physical basis.”

The editor writes that while many scientists have dismissed the theory outright—in part because it “seems to be in contradiction to common textbook knowledge”—the executive committee was “not convinced that the new view presented in the controversial paper is wrong.” 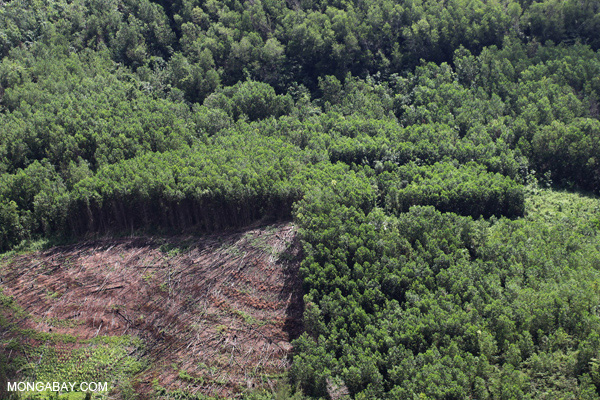 Gorshkov and Makarieva say that industrial plantations, such as this pulp and paper plantation in Malaysia, do not move rain as effectively as natural forest. Photo by: Rhett A. Butler.

So what about the theory itself? Gorshkov and Makarieva argue that meteorologists have long-missed an important driver of winds: condensation, and most importantly condensation caused by the major evaporation that occurs over forests. While scientists have long noted that deforestation also brings a drop in precipitation, no one could adequately explain the mechanism behind this. But Gorshkov and Makarieva argue that forests drive winds through “persistent condensation,” bringing in rain from the oceans. Put simply: no forests, no rain.

“During condensation water vapor disappears from the gas phase. Air pressure depends on the number of air molecules and is reduced by
condensation. Areas with persistent condensation become zones of low pressure that suck in the air from the surrounding regions.
Forests ensure both a store and a flux of moisture on land and thus create such persistent low pressure zones on land. This causes moist
winds to blow from the ocean to land,” they explain.

Put another way, regions with lots of rainfall “set up a positive feedback in which they bring in moisture from elsewhere,” according to Sheil, who adds that, “Forests maintain the highest evaporation of moisture of any land cover.”

Gorshkov and Makarieva say that their theory aptly explains why a continent like Australia is so dry—vast deforestation along the coasts of prehistoric Australia slowly turned the inner-continent into a drought-ridden dust bowl. The scientists warn that ongoing deforestation worldwide threatens not only biodiversity, indigenous people, and fresh water, but also precipitation. According to them, the more forests we lose, the less rain will reach continental interiors. Global deforestation would then threaten the very agricultural fields that are often replacing it.

“Deforestation erodes […] low pressure zones. The transport of moisture from the ocean to land first becomes highly erratic and then stalls altogether,” Gorshkov and Makarieva say. “Preserving and recovering forest cover may prove to be the cheapest and most reliable means of ensuring regional environmental sustainability.”

If correct, the theory could also hold a key to global ecological restoration: protect and restore forests to keep the rain. And the result could be a global transformation for the environment, agriculture, and society worldwide.

“One prediction is that if we could reforest the Sahara or the Australian interior, the wetter climate needed to water it would follow,” says Sheil. Instead of spreading desertification, which going on worldwide, human society could spread rain to rainless places. 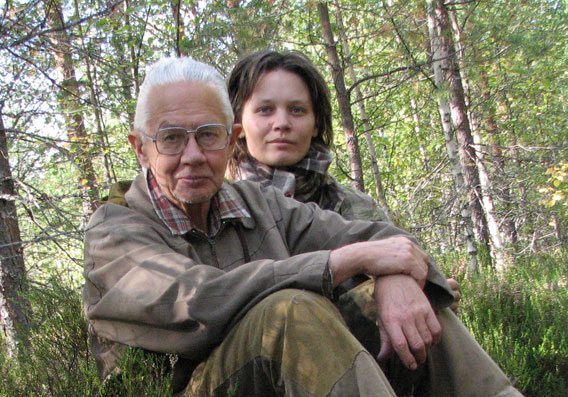 But proposing a total re-think of the basic underpinnings of meteorology is bound to bring up questions about climate change, and inevitable controversy.

It’s not surprising that some climate scientists—after being demonized by the media and having to combat endless misunderstandings on their work—have become prickly about anything that may suggest climate change isn’t happening or that greenhouse gases are not the major driver. Of course, from the melting sea ice in the Arctic to the earlier Spring in Europe, it’s obvious that drastic climate change is occurring. Research has also shown—time and again—that greenhouse gases are a driver, both in the past and now, of climatic change—that’s physics.

“Technically this theory has no direct bearing on global warming physics. The mechanism is distinct and independent,” says Sheil. “However, if the physical mechanisms operate as we propose, current models that have been developed to simulate global climate and predict changes are missing a major piece and are thus of uncertain value. The pump mechanism and land-cover change trends would need to be better reflected in any forecasts.”

For instance, Gorshkov and Makarieva say that their theory, if it stands the test of scrutiny, would mean taking a look at how changes circulation patterns could drive temperature changes.

“If condensation and circulation patterns change, this will affect the
vertical temperature lapse rate, cloud cover, ocean overturning etc.
— all of which determine the temperature regime, which can therefore
change without any additional drivers like anthropogenic CO2,” they
argue. “The current view, on the contrary, assumes that the on-going circulation changes (like for example those that currently maintain the record drought in the continental USA) are the consequences of carbon-driven climate change.”

The possible impact of shifting circulation patterns would need to be
built into current theoretical assessments of climate change.

“The acceptance of our theory will mean the need to reconsider the global role of carbon emissions from scratch—taking into account those wind changes that are driven by deforestation and other so far unstudied effects of condensation,” they say. “This does not mean that such a consideration will necessarily show that carbon emissions are unimportant.”

Climate scientists have spent years disproving alternate theories for current global warming—from solar flares to faulty data—and, as the evidence has piled up, the vast majority are now convinced that not only are greenhouse gas emissions the primary driver, but must be cut rapidly to avoid catastrophic global changes.

Given what’s at stake, Sheil notes that part of the pushback on the theory may be due to “a fear that opening up such a debate about the core climate principles is a gift to global warming deniers.” But if the biotic pump turns out to be true, it would not change the fact that the climate is changing and herculean efforts are needed to mitigate both the causes and the impacts, whether that focuses on greenhouses gas emissions, forests, or, as it happens, both, since forests ability to store carbon is just one of the many services they provide.

Sheil says that he hopes the publication of the paper will result in “careful scrutiny and evaluation.”

“If there is any chance that the theory is correct, and I believe there is, then it is essential that it gets proper attention. The publication will generate a lot of controversy and criticism, but that is very much needed,” he says, adding that, “To be clear—I do not insist that the theory is correct. But no one has yet shown me why it is wrong.” 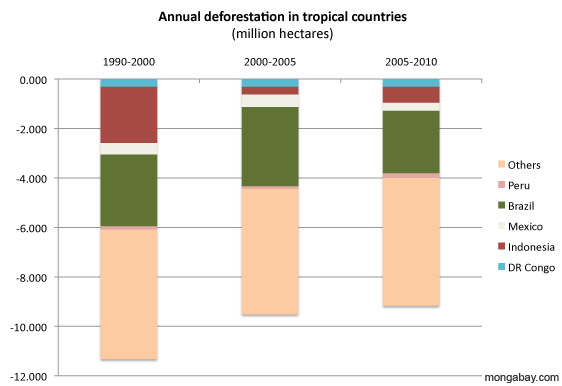