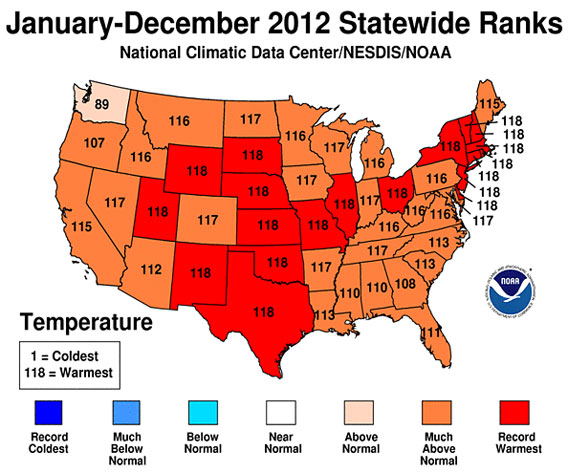 State-by-state temperature records for 2012. Last year was the warmest on record for the continental U.S. going back to the late 19th Century. Courtesy of NOAA.

Climate change is on the march across the U.S. according to a new draft report written by U.S. government scientists with input from 240 experts. It documents increasing and worsening extreme weather, rising sea levels, and ocean acidification among other impacts. Released Friday for public review, the report will be officially launched later this year or early in 2014.

“Americans are noticing changes all around them,” reads a letter accompanying the report. “Summers are longer and hotter, and periods of extreme heat last longer than any living American has ever experienced. Winters are generally shorter and warmer. Rain comes in heavier downpours, though in many regions there are longer dry spells in between.”

Released months after tropical storm Sandy ravaged portions of the East Coast and just days after it was announcement that 2012 was the warmest year on record for the continental U.S., the report notes that the primary cause of current climate change is greenhouse gas emissions.

“Global climate is changing, and this is apparent across the U.S. in a wide range of observations. The climate change of the past 50 years is due primarily to human activities, predominantly the burning of fossil fuels,” reads the report, which notes that average temperatures have risen by 1.5 degrees Fahrenheit in the U.S. with 80 percent of this rise happening in just the last 30 years.

Climate impacts have been observed in every region of the U.S., according to the report from historic droughts in the Southwest to heatwaves in the Northeast to shrinking Arctic sea ice in Alaska and vanishing freshwater supplies in Hawaii.

One of the biggest impacts on the country will be rising sea levels. Already, sea level rise is contributing to more severe storm surges such as the one that hit New York City and the New Jersey shoreline from Hurricane Sandy.

“After at least two thousand years of little change, sea level rose by roughly 8 inches over the last century, and satellite data provide evidence that the rate of rise over the past 20 years has roughly doubled,” the report reads. “In the U.S., millions of people and many of the nation’s assets related to military readiness, energy, transportation, commerce, and ecosystems are located in areas at risk of coastal flooding because of sea level rise and storm surge.”

The report predicts that sea levels could rise between 1-4 feet (0.3-1.2 meters) by the end of the century.

To date the U.S. has no comprehensive legislation tackling its greenhouse gas emissions, and the Obama Administration has largely avoided discussion of climate change following its inability to pass legislation in 2010. Still, Obama has recently stated that climate and energy issues are one of his priorities for the next four years, though it once again appears to be overshadowed by the economy, immigration, and guns.