Asia’s third largest animal may be on the rebound 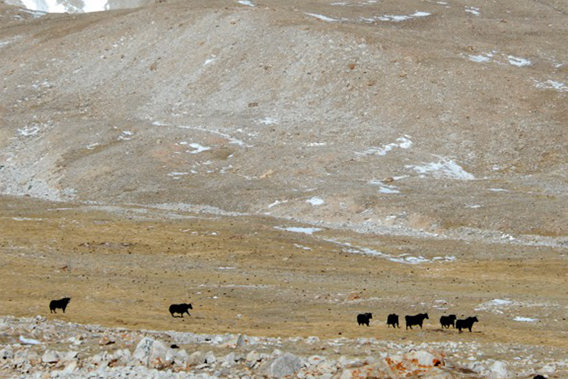 Wild yaks cross the Tibetan Plateau near the edge of a glacier. A scientific team recently counted more than a thousand wild yaks in this region signaling a possible comeback for this species once decimated by over-hunting. Photo by: Joel Berger, WCS/University of Montana.

Unlike Asia’s largest animal (the elephant) and its second largest (the rhino), the wild yak—the third largest animal on the world’s biggest continent—rarely makes headlines and is never paraded by conservation groups to garner donations. Surviving on the top of the world, in the Tibetan-Qinghai Plateau, the wild yak (Bos mutus) lives it life out in such obscurity that even scientists know almost nothing about it. However, a recent count by American and Chinese conservations with the Wildlife Conservation Society (WCS) and the University of Montana implies that the wild yak may be recovering after a close brush with extinction.

“Wild yaks are icons for the remote, untamed, high-elevation roof of the world,” said Joel Berger with WCS who led the expedition. “While polar bears represent a sad disclaimer for a warming Arctic, the recent count of almost 1000 wild yaks offers hope for the persistence of free-roaming large animals at the virtual limits of high-altitude wildlife.”

The story of the wild yak is similar to that of another megafauna, the American bison. Like the bison, wild yak were once abundant across much of Asia until overhunting decimated the species, leading to local extinction in many of its haunts, including Nepal, Russia, Kazakhstan, Mongolia, and Bhutan. Now, the animal hangs on in just a few spots, most importantly, on the Tibetan plateau. Still, poaching, competition with livestock, and breeding with common yak continue to threaten its survival.

Berger and his team counted 990 yaks in China’s Hoh Xil Nature Reserve, a significant number according to the team and a sign that recent conservation efforts may be making good. The wild yak is currently listed as Vulnerable by the IUCN Red List, though few systematic population counts have been conducted.

“For millennia, yaks have sustained human life in this part of Asia, it would be a cruel irony if their reward is extinction in the wild,” noted Joe Walston, WCS Executive Director of Asia Programs.

Unlike most of the world’s large mammals, almost nothing is known about wild yaks: including how often they breed, mortality rates for infants, and the role wolves—their biggest predator after humans—play in their populations. But given that the last strong population survive on the top of the world, where glaciers and alpine meadows are still found, a rising threat to the species may be climate change. In the future, Berger and his team plan to study how climate change may impact the Tibetan plateau while also looking more closely at wildlife-human conflict in the region. 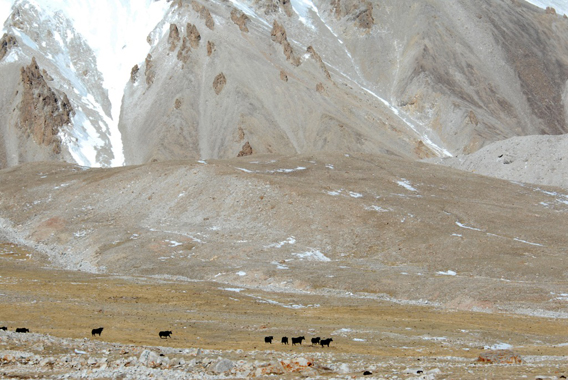 (01/14/2013) Cordyceps sinensis, commonly known as caterpillar fungus, may be a groundbreaking new treatment for a number of life-threatening conditions including asthma, kidney failure and cancer according to a paper recently published by The RNA Society. If you’re a caterpillar of the Tibetan Plateau, the fungus Cordyceps is your worst nightmare. It hits you when you’re most vulnerable, during hibernation. You can try to stay awake, but on the Tibetan plateau, which reaches −40 degrees Celsius during the winter, you’ll have to hibernate sooner or later, and the fungus will be waiting for you.