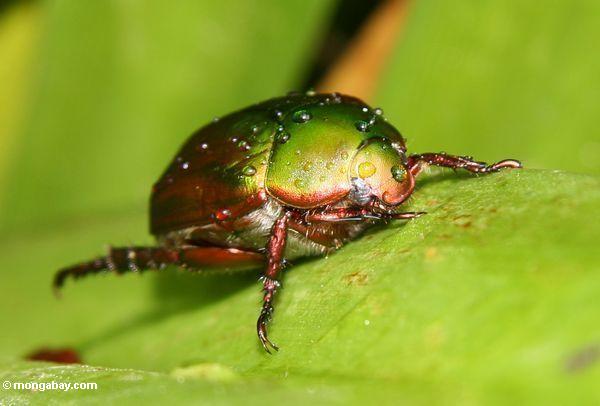 Rainforest beetle in Malaysian Borneo. Photo by: Rhett A. Butler.

Reducing Emissions from Deforestation and Degradation (REDD+), the UN program to conserve tropical forests by paying developing nations to keep them standing, should go hand-in-hand with increased genetic studies of imperiled tropical biodiversity, according to a new opinion article in mongabay.com’s open access journal Tropical Conversation Science. Most importantly, REDD+ could benefit from the study of phylogeography, a new field that looks at a species’ genetic variations across a region, argues the study’s author Peggy MacQueen with the University of Adelaide.

“REDD+ may offer one of the most well supported international frameworks to date for reducing forest habitat loss and protecting tropical diversity,” MacQueen writes, noting that the program, if successful, “offers a relatively ‘holistic’ approach to reducing forest degradation through the recognition that forest conservation for carbon stocks should be integrated with initiatives for the conservation of biodiversity.”

MacQueen says that REDD+ should take into view increased research in phylogeographics, which examines, among other things, how historical processes impact species populations at the genetic level. For example, many species have been split into genetically distinct populations by past climate change or the rise geographic barriers, like rivers. In terms of biodiversity conservation, REDD+ should consider such distinct genetic populations as important as unique species.

According to MacQueen, phylogeographic research can inform REDD+ in three important ways: by identifying distinct populations and cryptic specie s(i.e. species that look the same as other species, but with genetic information prove to be distinct); prioritizing populations and places that are important for conservation, especially as climate change forces large-scale species migrations; and finding out how climate change caused species to move in the past by looking at their genetics. But phylogeographics is a young discipline and not widely known outside of academia.

“The consideration of phylogeographic patterns in practical conservation programs is still limited, even in developed countries,” MacQueen notes. “Under large-scale initiatives such as REDD+, there is now potential for increased consideration of ecological and land-use data. These data could be integrated with regional spatial genetic data generated through a phylogeographic approach for management and planning purposes.”

She recommends that phylogeographics be used in mapping areas, including determining bioregions and even in planning new or expanding existing protected areas.

“The consequences of widespread population extinction for global ecosystem stability should be considered as serious as the consequences associated with species extinction,” MacQueen writes.

5 years in, debates over REDD+ continue

(11/28/2012) An initiative that aims to slow global warming by paying developing countries to protect and better manage their forests is expected to be an important storyline during climate talks in Doha this week and next. REDD+ (Reducing Emissions from Deforestation and Degradation), as the mechanism is known, has grown in complexity since it gained momentum during the 2005 climate talks in Montreal, but is arguably moving forward faster than other areas of climate negotiations. Still, many elements of REDD+ continue to be as hotly debated today as they were five years ago when it got the conceptual OK from the U.N. These include the process for establishing baselines to measure reductions in emissions, safeguards to protect against adverse outcomes for biodiversity and forest-dependent communities, and financing and markets.