Female lion with wildebeest kill in Tanzania. Photo by: Rhett A. Butler.

African lions, one of the most iconic species on the planet, are in rapid decline. According to a new study in Biodiversity Conservation, the African lion (Panthera leo leo) population has dropped from around 100,000 animals just fifty years ago to as few as 32,000 today. The study, which used high resolution satellite imagery to study savannah ecosystems across Africa, also found that lion habitat had plunged by 75 percent.

“There is evidence of strong declines and even extirpation of lions in some range countries. Especially in West and Central Africa, declines have been dramatic and conservation measures are urgent,” the researchers write. “While lions are protected in some of the lion areas, in many they are not, and in others they are hunted.”

The study found that 24,000 lions (about 75 percent of the total) are located in ten strongholds, all of which are found in either East or Southern Africa. Tanzania alone contains 40 percent of the global population.

Yet, about 6,000 animals (18 percent) are in populations where “long-term viability” is at risk. The study also found extinctions of local lion populations even in protected areas.

“This research is a major step in helping prioritize funding strategies for saving big cats,” said co-author Luke Dollar with National Geographic’s Big Cats Initiative (BCI), which helped fund the study. “The research will help us better identify areas in which we can make a difference.”

The area that requires the most urgent action is West Africa, which according to the study houses only about 525 lions.

“[West Africa] has no large population remaining and lions now absent from many of the region’s national parks,” the authors write.

“Giving these lions something of a fighting chance will require substantial increases in effort. The next 10 years are decisive for [West Africa], not just for lions but for biodiversity, since lions are indicators of ecosystem health,” co-author Andrew Jacobson, also with Duke University, said.

One of the primary threats to Africa’s lion is habitat loss. Their savannah ecosystems are experiencing widespread conversion due to expanding agriculture and urbanization, exacerbated by a massively growing human population across much of Africa. In addition, lions are facing increased human-wildlife conflict. Where they pose threats to livestock, they are often speared, poisoned or poached. Legal hunting may also be taking a significant toll, especially given its focus on male lions. Finally, there are concerns that lions are being killed for Chinese traditional medicine as replacement for tiger bones.

The study’s estimate, ranging from 32-35,000 lions, falls in the middle of other estimates during the decade, ranging from about 20,000 to 40,000 lions. The IUCN Red List currently classifies the lion as Vulnerable. 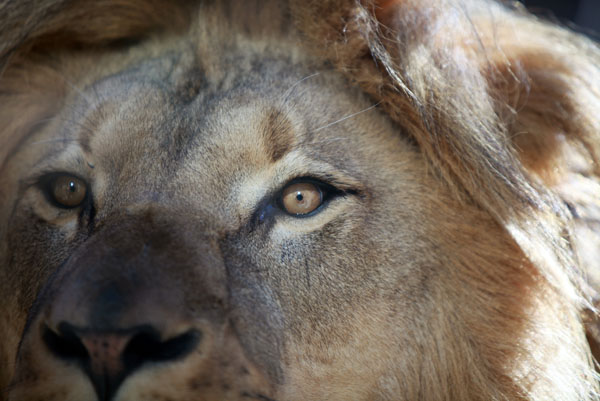 Male lion in a zoo. Photo by: Rhett A. Butler.

(12/04/2012) Few of the world’s ecosystems are more iconic than Africa’s sprawling savannahs home to elephants, giraffes, rhinos, and the undisputed king of the animal kingdom: lions. This wild realm, where megafauna still roam in abundance, has inspired everyone from Ernest Hemingway to Karen Blixen, and David Livingstone to Theodore Roosevelt. Today it is the heart of Africa’s wildlife tourism and includes staunch defenders such as Richard Leakey, Michael Fay, and the Jouberts. Despite this, the ecosystem has received less media attention than imperiled ecosystems like rainforests. But a ground-breaking study in Biodiversity Conservation finds that 75 percent of these large-scale intact grasslands have been lost, at least from the lion’s point of view.

(10/15/2012) The title is not a typo. Sometimes lioness grow manes as rich and large as males, and there appears to be larger proportion of such ‘maned lionesses’ in Botswana’s Okavango Delta.

Conservation groups propose ban on lion parts in US

(03/02/2011) It’s not widely known that the African lion ((Panthera leo) is currently threatened with extinction in the wild, but listed as Vulnerable by the IUCN Red List, the king of animals has declined by over 90% in the past 50 years (from 450,000 lions to between 20,000 and 40,000 today). While conservation work to save the species is on-going in Africa, efforts have now moved to the US as well, where a coalition of conservation groups are filing a petition with the US Department of the Interior to list lions as ‘endangered’ under the Endangered Species Act (ESA). Such a listing would make it illegal to bring lion parts in the country, including those killed by recreational trophy hunters.