Dec 8, 2012 update: Tim Killeen of WWF says that the analysis highlighted below appears to exclude extensive deforestation in part of Bolivia. See the comments for more details. 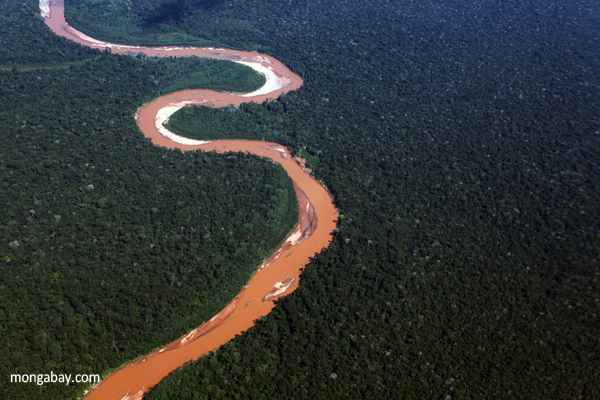 It’s not just Brazil where the deforestation rate is falling. Rainforest in the Peruvian Amazon. Photo by Rhett A. Butler.

The average annual rate of deforestation across Amazon rainforest countries dropped sharply in the second half of the 2000s, reports a comprehensive new assessment of the region’s forest cover and drivers of deforestation.

While the drop in deforestation in the Brazilian Amazon has been widely reported, several other Amazon countries saw their rates of forest loss drop as well, according to the report, which was published by a coalition of 11 Latin American civil society groups and research institutions that form the Amazonian Network of Georeferenced Socio-Environmental Information (RAISG).

The atlas shows the sharpest decline occurred in the tiny nation of Suriname, where deforestation fell 80 percent from 938 square kilometers between 2000 and 2005 to just 191 sq km between 2005 and 2010. Brazil (61 percent drop), Venezuela (46 percent), Ecuador (18 percent), Guyana (17 percent), and Bolivia (17 percent) followed. Brazil experienced the overall largest drop in deforestation in terms of overall area, going from 138,804 sq km to 54,181 sq km between the two periods.

Overall deforestation across the Amazon fell by 53 percent between the two periods. Meanwhile the extent of indigenous territories and protected areas also increased during the decade.

But the report’s results were’t entirely rosy. Pressure on forests from infrastructure projects is increasing. Roads are metastasizing across swathes of forest, providing access for loggers, farmers, ranchers, and land speculators to once remote areas. Large parts of the Amazon have also been granted for mining (52,000 ming areas covering 1.3 million sq km) and oil and gas development (327 lots covering 1.1 million sq km). Meanwhile some 246 dams, including 67 larger than 30 megawats, are planned for the region, threatening to choke off rivers that play a key role in the Amazon’s ecological processes. 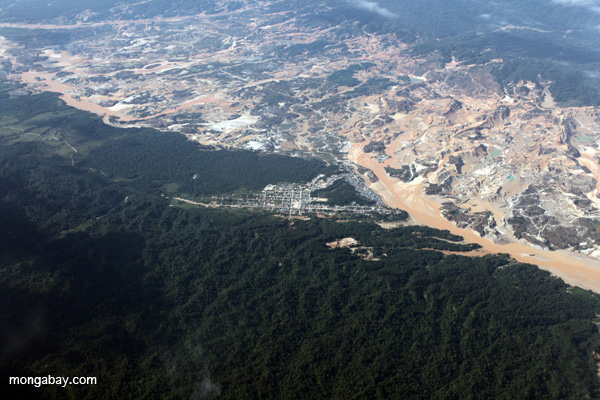 Gold mining operation in the Peruvian Amazon. Photo by Rhett A. Butler.

“If all the overlapping economic interests become a reality over the next few years, Amazonia will become a savannah with islands of forest,” said RAISG’s general coordinator, Beto Ricardo of Instituto Socioambiental, a Brazilian NGO.

The atlas contains a wealth of data for each of the eight countries and one department that make up the Amazon rainforest. It features tables, charts, and maps on forest cover, deforestation, the incidence of fire, dams, roads, mining concessions, oil and gas zones, indigenous territories, and protected areas. It also assesses key drivers of past and future deforestation in the region.

(11/07/2007) While the mention of Amazon destruction usually conjures up images of vast stretches of felled and burned rainforest trees, cattle ranches, and vast soybean farms, some of the biggest threats to the Amazon rainforest are barely perceptible from above. Selective logging — which opens up the forest canopy and allows winds and sunlight to dry leaf litter on the forest floor — and 6-inch high “surface” fires are turning parts of the Amazon into a tinderbox, putting the world’s largest rainforest at risk of ever-more severe forest fires. At the same time, market-driven hunting is impoverishing some areas of seed dispersers and predators, making it more difficult for forests to recover. Climate change — an its forecast impacts on the Amazon basin — further looms large over the horizon.

(10/04/2007) A plan to link South America’s economies through a series of infrastructure projects, could destroy much of the Amazon rainforest, warns a new study by conservationists.