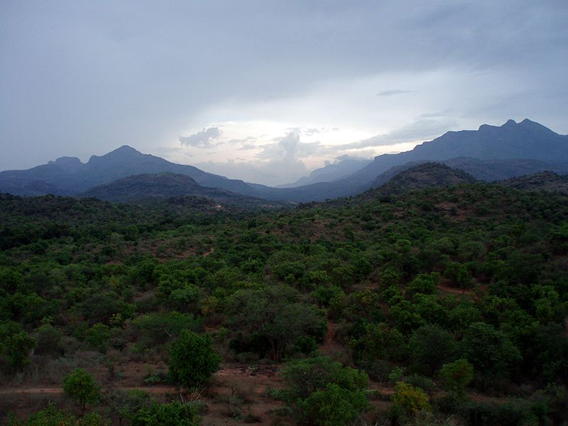 Policymakers seeking to conserve forests in southern India should focus on those receiving the highest levels of rainfall, according to new research. Scientists from the Center for International Forestry Research (CIFOR) found rainfall to be the most important environmental determinant of species richness in the Anamalai region of the southern Western Ghats.

The Western Ghats comprise just six percent of the Indian landmass yet contain almost a third of all plant and vertebrate species found countrywide. This includes 1,500 endemic flowering plants. While regarded as one of the “Hottest Hotspots” of biodiversity in the Old World tropics, the Western Ghats teeter on the brink of ecological collapse. Between 1920 and 1990 forest cover declined by more than a third, resulting in more numerous and smaller forest patches. Scenarios generated by Intergovernmental Panel on Climate Change (IPCC) also predict that India could experience warmer temperatures and less predictable rainfall as a result of climate change, particularly if the summer monsoon becomes shorter and more intense. The wet, rich and biodiverse forests are exactly those most at risk from the effects of more prolonged drought and human pressures.

“While we cannot control rainfall itself, what we can do is conserve those landscapes that have high rainfall,” said Shijo Joseph from the Center for International Forestry Research, the lead author of the study. With forests vanishing, the recommendations from this research could be particularly timely as policymakers struggle to assign limited budgetary resources to maximize conservation returns.

“We need to know what key environmental drivers are acting on the region to help prioritize land for conservation,” added Joseph.

When researching the structure and composition of Anamalai forests, scientists found that rainfall was the primary factor inﬂuencing tropical forest diversity. An increase in annual rainfall from 400 millimeters (mm) in thorny scrub regions to 4,500 mm in rainforests resulted in a threefold increase in species richness.

Though this generalization is applicable to the Western Ghats, it may not hold true for all the Old World tropics. In tropical Asia, for example, high rainfall areas such as Mt. Cherrapunji, Assam, are characterized by relatively low plant species richness. And in tropical Africa, two high rainfall sites (over 5,000 mm/year) in southwestern Cameroon had only marginally more species than sites from northeastern Gabon that receive less than 2,000 mm of annual rainfall.

Still, in the context of climate change, focusing only on those areas that are currently rich in biodiversity could also be incredibly short-sighted. A study last year of European protected areas suggests that by 2080 climate perturbations could lead to new environmental conditions that are no longer be suitable for more than half of vertebrate and plant species in the parks.

The findings from the present study may allow limited conservation resources to be channeled into areas with the richest set of species. The crucial role of rain cannot be understated, according to scientists.

Instead of trying to influence precipitation, we can instead try to follow what nature is providing,” Joseph concluded.