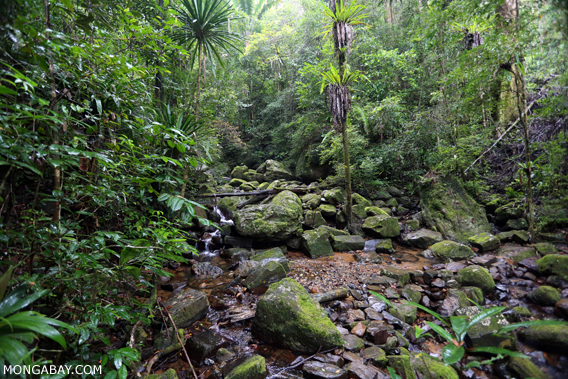 Rainforest on the Masoala Peninsula, Madagascar, in October 2012. Masoala suffered from widespread rosewood logging in 2009 and 2010.

Timber traders in Madagascar are smuggling illegally logged rosewood despite an official export ban, alleges a new report published by a Malagasy researcher.

The report, authored by Hery Randriamalala and based on press clippings, cargo manifests, and eye-witness accounts, indicates that traders are covertly reducing rosewood stockpiles accumulated during a frenzy of illegal logging in the aftermath of the 2009 coup that displaced Malagasy President Marc Ravalomanana. Rosewood logs are ferried by small boats to “mother ships” anchored just out of site from beaches in northeastern Madagascar. Another approach involves falsifying cargo manifests, according to the report, which details an April incident where containers full of rosewood were labeled as containing ilmenite mined by a Chinese mining company.

The report names names, including two prominent rosewood traders, Jean-Pierre Laisoa and Arland Ramialison, which it says own the “mother ships” that carry rosewood to China, the primary market for Madagascar rosewood. It also alleges a connection between rosewood smuggling and a key advisor to Andry Rajoelina, the President of Madagascar’s High Transition Authority, which seized power after the 2009 coup. It notes the advisor, Mamy Ravatomanga, is the head of SODIAT, the shipping firm involved in the ilmenite incident.

“By stating ‘ilmenite’ on the manifests, the containers avoid scrutiny by customs officials in Toamasina,” states the report. “This system is referred to as the ‘yellow channel’ because it appears to be dedicated to supplying Chinese operators. This fast lane was operational by November 2011, with orders coming directly from the head of customs… The successful operation of [the] ‘yellow channel’ requires many accomplices at many levels in the Administration.”

Randriamalala’s report adds that a China-based company earlier this year proposed to buy all of Madagascar’s rosewood stocks. That proposal was allegedly discussed during an April 2012 meeting in Madagascar’s capital, Antananarivo, that was attended by several prominent officials, including Rajoelina.

The report concludes by speculating that “rosewood will fund the next electoral campaign for one of the presidential candidates”.

During a recent visit to Madagascar, Mongabay.com was unable to independently assess the validity of the report’s claims. However Randriamalala has previously published papers on Madagascar’s rosewood trade, including a comprehensive overview in the journal Madagascar Conservation & Development.

Logging of rosewood and ebony has hit Madagascar’s endangered rainforests hard. In 2009 and 2010 loggers invaded several of Madagascar’s most biodiverse rainforest parks, extracting timber, hunting wildlife, and threatening conservation workers and local communities. Logging has since been linked to a rise in a commercial bushmeat trade for lemurs.