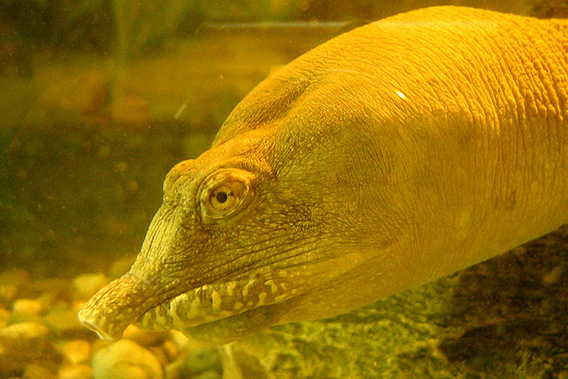 One of China’s most commonly farmed turtles for consumption, the Chinese soft-shelled turtle (Pelodiscus sinensis), has a unique ability: it urinates out of its mouth. Researchers in Singapore, writing in The Journal of Experimental Biology, have discovered that the Chinese soft-shelled turtle excretes most of its urine from its mouth instead of its kidneys. They hypothesize that the turtle developed this ability in order to survive in brackish waters, which contain considerably more salt than freshwater.

The scientists became curious about the turtle’s waste habitats, when they noticed that the air-breathing animals would submerge their heads underwater for long periods, between 20-100 minutes. Measuring the water for urea, a primary compound in urine, the researchers found 50 times more urea in the water than was produced by the animal’s cloaca, or waste cavity.

“The ability to excrete urea through the mouth instead of the kidney might have facilitated the ability of [the Chinese soft-shelled turtle] and other soft-shelled turtles to successfully invade the brackish and/or marine environment,” the scientists write. If the turtle passed its urine through its kidneys it would need to make up the lost fluid by drinking water, but, although surrounded by water, the Chinese soft-shelled cannot drink salty water because it would eventually result in toxicity; reptiles are especially poor at ridding themselves of salt. By urinating through the mouth, the Chinese soft-shell turtle has evolved not to need large amounts of water.

The scientists believe that the Chinese soft-shelled turtle uses gill-like projections on the inside of its mouth to expel the urine, much like fish urinate out of their gills.

Although the Chinese soft-shelled turtle numbers in the millions in captive farms, the species is vanishing from the wild. Currently the IUCN Red List categorizes the species as Vulnerable.