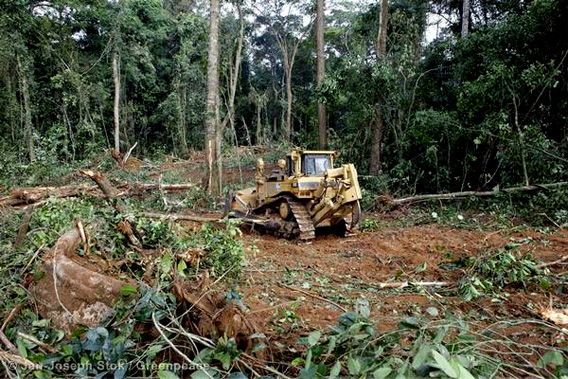 Herakles Farm, a U.S.-based agricultural developer, will no longer seek eco-certification of its 70,000-hectare oil palm plantation in Cameroon, reports the Roundtable on Sustainable Palm Oil (RSPO). The move comes amid criticism from environmental groups that Herakles is converting high conservation value rainforest for the plantation.

Herakles announced the decision in a letter to the RSPO, following complaints filed by a range of NGOs against the palm oil developer’s planned project. Had Herakles proceeded with RSPO certification, it would have had to avoid conversion of wildlife-rich forest (High Conservation Value assessment for Herakles’ concession area), taken measures to reduce pollution, and maintained certain safeguards for workers. Now Herakles need not comply with such standards, although the company indicates it plans to do so.

“This is a very sad day for Cameroon,” said BasileYapo, Country Director of WWF Cameroon.

The controversy around the project also may make it more difficult for Herakles to line up investors. Nigel Sizer, director of World Resources Institute’s (WRI) Global Forests Initiative, told mongabay.com in a 2011 interview that “many potential investors will shy away from a project that involves reputational risks from forest loss and complicated negotiations with local communities who claim rights to the area.”

“This project may not be consistent with the Equator Principles, which most major funders of emerging market projects have signed up to.” 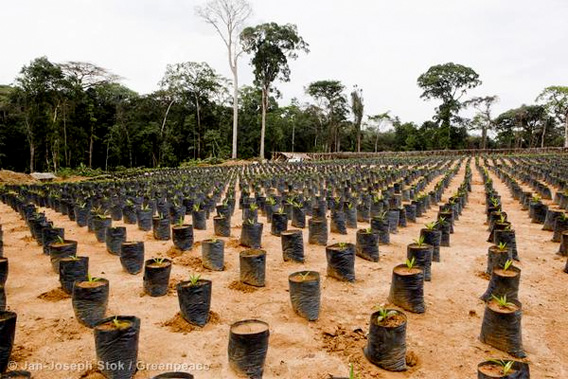 Pressure on Herakles has mounted in recent months with environmental behemoths WWF and Greenpeace joining in local grassroots opposition to the project. This week Greenpeace, together with The Oakland Institute, released a report critical of Herakles.

“The planned Herakles Farms project must be stopped now,” said Greenpeace Forests Campaigner, Frederic Amiel. “On top of the legal issues, it is the wrong project in the wrong place. Greenpeace does not believe that palm oil produced from deforestation should ever reach the markets.”

Frederic Mousseau of The Oakland Institute called the project a land grab.

“Once again, the investor is deceiving the public into believing that forests must be cut down and small farms erased in order to alleviate hunger and poverty. International attention needs to be mobilized to support local opposition and prevent future resource grabs,” he said.

Cameroon does not currently rank among the world’s top 15 palm oil producers even though the oil palm cultivated most widely is native to the country. Cameroon produced 111,440 tons of palm oil in 2010, according to the U.N. 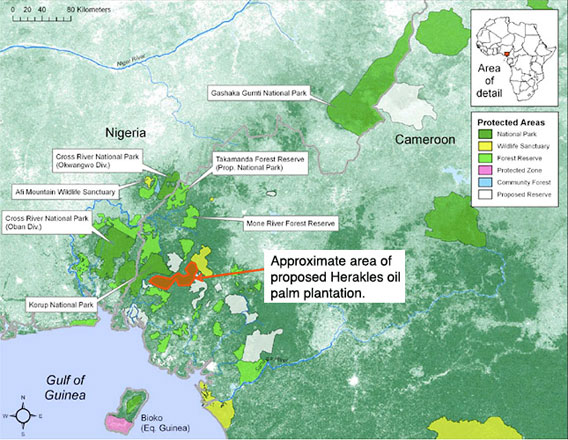 Map of the Herakles/SGSO plantation in Cameroon. Courtesy of SAVE Wildlife Conservation Fund

(09/12/2011) As global agricultural companies turn to Africa, a U.S. firm is planning a massive oil palm plantation in Cameroon that it says will benefit local villagers. But critics argue that the project would destroy some of the key remaining forests in the West African nation and threaten species-rich reserves.