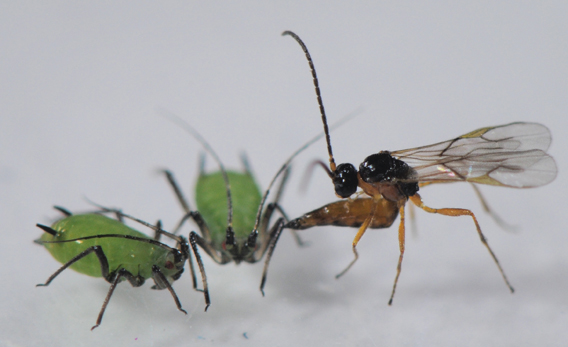 A new study in Biology Letters demonstrates that altering the relationship between a predator and its prey can cause wide-ranging ripple effects through an ecosystem, including unexpected extinctions.

To study the connections between species, ecologists and students from the University of Exeter’s Centre for Ecology and Conservation conducted a lab experiment which analyzed how the extinction of a single predator wasp species impacted its neighbors.

“Our experiment provides the first proof of something that biologists have argued for a long time: predators can have indirect effects on each other, to the extent that when one species is lost, the loss of these indirect effects can lead to further extinctions,” said lead author Dr Frank van Veen, in a press release.

The study of five interrelated species confirms that ecosystems are structured more like webs than chains. Ecologists created laboratory model ecosystems assembled from the Sutton (Vicia faba) plants as a shared resource for the herbivorous Scopoli aphids (Aphis fabae) and the Harris aphids (Acyrthosiphon pisum), as well as their carnivorous parasitoid wasp predators: the Marshall wasp (Lysiphlebus fabarum) and the Haliday wasp (Aphidius ervi), each of which attacks only one of the aphid species.

Research involved the mock extinction of the Haliday wasp, which exclusively feeds on the Harris aphid. The experiment was conducted in seven replicates over eight weeks, and in each case, the removal of the Haliday wasp resulted in the cascading extinctions of other species.

The Harris aphid, no longer controlled by its Haliday wasp predator, saw its population boom and was soon outcompeting the Scopoli aphid for access to its food plant, the Sutton. The stiff competition between aphids eventually pushed the Scopoli aphid into extinction, which in turn led to the extinction of its main predator, the Marshall parasitoid wasp.

In other words, the extinction of the first wasp resulted in the loss of two other species through a sequence of direct and indirect domino-like effects.
The study illustrates the need to anticipate the secondary effects of extinction when trying to prevent biodiversity loss. To effectively save species a finer appreciation of the complex network of relationships within ecosystems is needed. The authors argue in their paper that additional ecosystem-wide research is needed to appreciate more fully how species relate to and affect each other, sometimes unpredictably.

“Although our study focused on insects, the principle would be the same for predators in any ecosystem, ranging from big cats on the African plains to fish in our seas,” van Veen says. “Our research highlights the fact that a ‘single species’ approach to conservation can be ineffective and even counter-productive.”

(08/28/2012) Japan’s Ministry of the Environment today declared the Japanese river otter (Lutra lutra whiteleyi) extinct. Last seen in 1979 in the city of Susaki on the island of Shikoku, the unique subspecies was killed-off by overhunting and loss of habitat due to development.

Still time to save most species in the Brazilian Amazon

(07/12/2012) Once habitat is lost or degraded, a species doesn’t just wink out of existence: it takes time, often several generations, before a species vanishes for good. A new study in Science investigates this process, called “extinction debt”, in the Brazilian Amazon and finds that 80-90 percent of the predicted extinctions of birds, amphibians, and mammals have not yet occurred. But, unless urgent action is taken, the debt will be collected, and these species will vanish for good in the next few decades.