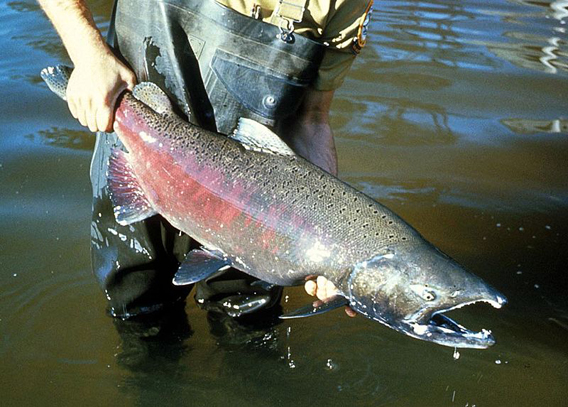 In March of this year the Elwha Dam, which had stood for 99 years, was demolished in the U.S. state of Washington. Five months later, Chinook salmon (Oncorhynchus tshawytscha) made their way down the river to long-blocked off habitat and entered Olympic National Park.

“As I saw the fish roll, my heart jumped!” said Phil Kennedy, Lead Fisheries Technician for Olympic, in a press release.

Park officials have been conducting weekly checks all summer, waiting for the Chinook salmon to make their return.

The Elwha Dam, which began running in 1913, was built without incorporating fish ladders, which would have let the salmon pass. In 1992 the U.S. government acquired the dam with the intent of demolishing it to allow salmon to naturally return to the Elwha River. However, the fish can only travel so far, as 13 miles down the river the salmon encounter another hydroelectric project, the Gilnes Canyon Dam. The government has purchased this dam as well and plans to demolish it, allowing the salmon to run the full river.

Prized for their meat, Chinook salmon were once plentiful in the American Northwest, but dam building, development, and widespread habitat loss has taken a massive toll on the species.

(08/08/2012) A new video highlights recent efforts to restore rivers in the Tongass Forest, the world’s largest intact temperate rainforest. Industrial logging in vital watersheds have hurt salmon populations and other wildlife in the region, an issue the government, along with several partners, are now trying to rectify.

Regulations help fish, and fishermen, recover in the U.S.

(05/30/2012) Marine fish populations in the U.S. are generally recovering, according to a new report by the National Oceanic and Atmospheric Administration (NOAA). Last year six fish populations reached healthy levels in the U.S., boosting the total number of fish populations that have recovered to 27 since 2000. The success is due to the implementation of science-based annual catch limits which regulate how many fish are caught every year.

(05/24/2012) The U.S. tropical aquarium market poses problems and opportunities for conservation, according to a landmark study published in the open-access journal PLoS ONE. The study reviewed import records in the U.S. for one year (2004-2005) and found that over 11 million wild tropical fish from 1,802 species were imported from 40 different countries. While the number of fish species targeted surprised researchers, the total amount of fish imported was actually less than expected.