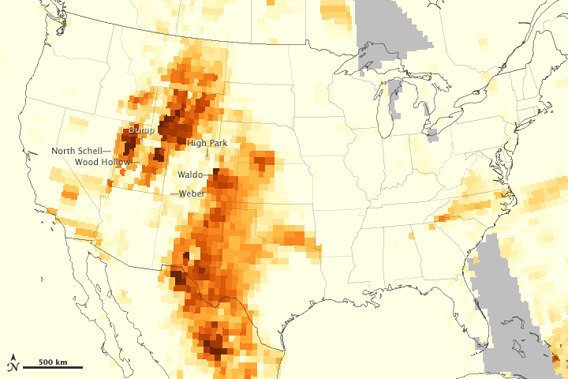 The map depicts the relative concentration of aerosols from wildlife smoke in the skies above the continental U.S. on June 26, 2012. Image by: NASA.

A noted climate scientist says there is “no doubt” that climate change is “playing a role” in this year’s series of record fires in the western U.S. A massive wildfire in Colorado has forced the evacuation of 36,000 people, destroyed over 300 homes, and killed two people. The devastation wrought by the Waldo Canyon Fire even prompted a visit form U.S. President Barack Obama. But this is not the only epic fire in the U.S. this year: less than a month before the Colorado disaster, New Mexico experienced its largest fire on record in Gila Nation Forest; the conflagration burned up 247,000 acres (100,000 hectares). Other major wildfires have occurred in Utah and Wyoming, as well as other parts of New Mexico and Colorado.

“I have no doubt climate change is playing a role in this,” climate scientist Kevin Trenberth, who heads the Climate Analysis Section at the National Center for Atmospheric Research (NCAR), told The Salt Lake Tribune, noting that “there are wildfires all over the place.” Located in Boulder Colorado, Trenberth’s NCAR lab was recently evacuated due to the Waldo Canyon Fire.

Trenberth may be be a bit more outspoken about the link between on-going fires and climate change than some of this colleagues, but his views are widespread among other climate experts as well.

“Global warming has in general made this part of the world [the Southwest U.S.] warmer and drier than it would be otherwise,” Michael Oppenheimer director of the Program in Science, Technology and Environmental Policy (STEP) at Princeton University said in a recent conference call, noting that “what we’re seeing fits into a pattern.”

Hotter temperatures, lower snow pack, and droughts are creating optimal conditions for fires in the Southwest. In addition, the longtime practice of suppressing small fires and a recent mass-infestation of bark beetles in the region’s forests has left plenty of fuel to burn. Add wind, and the fire becomes “a blast furnace,” Steven Running, a forest ecologist with the University of Montana, said in the conference call.

When that happens he says, “humans aren’t going to stop [these fires] anymore than they’re going to stop hurricanes in the Gulf Coast.”

Such mega-fires are not a surprise, but fit into general predictions made for a warming world. A 2009 report commissioned by the George W. Bush administration specifically predicted that climate change would increase the likelihood of droughts and wildfires in the American Southwest. The report also made particular note that a rise in wildfires would devastate both forests and property in the area.

The infestation of bark beetles, which is also exacerbating fires in the region, is widely considered to be connected to global climatic changes as well. Bark beetles cannot survive longtime exposure to cold temperatures, but given warmer nights and milder winters, bark beetles have decimated forests in the American and Canadian west over the last decade. Climate change has also allowed bark beetles to successfully infest new areas, including high altitudes and new latitudes.

This year’s temperatures have been particularly extreme in the U.S., even though the globe is currently at neutral when it comes to El Nino conditions, which usually harbinger warmer temperatures. The last 12 months have been the warmest on record (going back to 1880) in the continental U.S., and the number of record high temperatures have outpaced record lows by 9 to 1 this year. The past spring was also the warmest ever recorded, while the current summer is breaking some records set during the Dust Bowl.

These extremes also fit into patterns seen worldwide. A recent report by Climate Communication points out that major heatwaves struck Texas in 2011, Russia in 2010 (including massive forest fires), and Europe in 2003. Statistical research has since shown that there is an 80 percent chance that the Russian heatwave of 2010 would not have occurred if not for climate change.

“Extremely hot summers, those more than three standard deviations above the historic average, are now observed in about 10% of the global land area, compared to 0.1-0.2% for the period 1951-1980,” reads the report.

Given ongoing climate change, heatwaves, droughts, and fires are expected to occur with greater regularity in some parts of the world, while other regions are expected to become more prone to flooding.

Oppenhemier said that the Waldo Canyon Fire, the most destructive in Colorado’s history, was a “vivid image of what we can expect more of in the future.” The only way to combat this, says Oppenhemier, is to “[work] as hard as we can to reduce emissions.”

(06/18/2012) Last month was the second warmest May since record-keeping of global temperatures began 132 years ago. Globally, temperatures were 0.66 degrees Celsius (1.19 Fahrenheit) above the 20th Century Average and were only topped by May 2010, according to preliminary findings by the National Oceanic and Atmospheric Administration (NOAA).