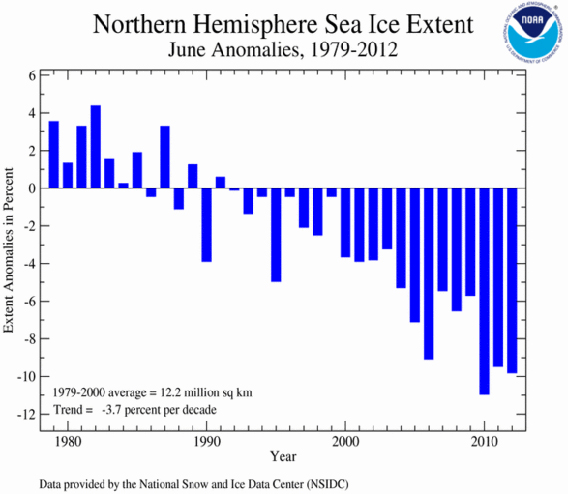 Sea ice extent in June since 1979. Graph courtesy of NOAA.

The Northern hemisphere suffered its warmest June on record across land and sea, while globally it was the fourth warmest June yet, according to new data from the National Oceanic and Atmospheric Administration (NOAA).

Worldwide, temperatures were 0.63 degrees Celsius (1.13 degrees Fahrenheit) above the average temperature of the 20th Century. In the Northern Hemisphere—where much of Russia and North America sweltered under heatwaves—the temperature was 1.3 degrees Celsius (2.34 degrees Fahrenheit) above normal. Meanwhile, the Arctic has also been significantly warmer than normal resulting in a record drop in sea ice during the month. Sea ice is now at its second lowest extent recorded for this time of year.

The first six months of 2012 have put it on track to be the eleventh warmest year on record, though that is likely to change depending on the next six months. As La Nina conditions dissipated in the Spring, the year has increasingly seen more abnormal warmth. Currently, the world remains in a neutral phase, yet El Nino could start soon.

Overall, the world is warming due to climate change with global temperatures up 0.8 degrees Celsius (1.44 degrees Fahrenheit) since the early 20th Century.