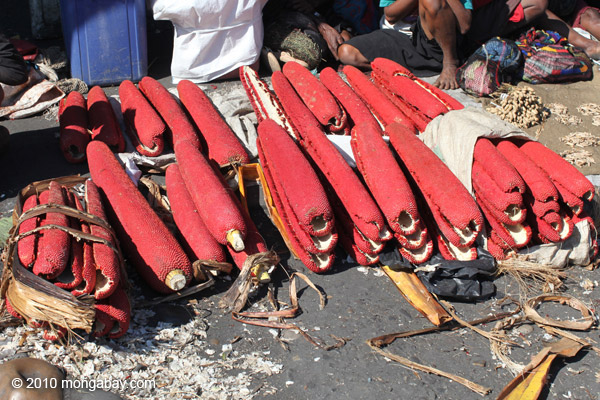 Harvesting of non-timber forest products (NTFPs) is failing to meet lofty goals for combining conservation and poverty alleviation, said a forestry expert speaking at the annual meeting of the Association for Tropical Biology and Conservation in Bonito, Brazil.

Long hailed as a “silver bullet” for sustainable development schemes and conservation initiatives, a long-running study led by the Center for International Forestry Research found that linkages between sustainable harvesting and conservation are “tenuous”, according to Terry Sunderland, a senior scientist with CIFOR’s Forests and Livelihoods Program.

The problems are myriad. NTFPs are generally found in low densities in natural forests and are often part of an informal market — a “hidden harvest” — making it difficult to value them. Once they find a significant market, the pressure to overharvest can be intense, leading to unsustainable use, conversion of natural forests into “domestic” agroforests, or even monocultures, in the case of some of the most successful NTFPs like rubber and oil palm.

Lack of land tenure can further exacerbate unsustainable practices. For example, loss of forest access due to commercial forestry concessions or the establishment of strict protection areas (parks where no sustainable use is allowed) can deprive local users of collection zones, increasing the intensity of harvesting in other forest areas.

Attempts to integrate NTFPs with conservation efforts have been let down by unrealistic expectations triggered by academic papers published in the late 1980s and early 1990s that “greatly over-exaggerated” the value of products like nuts, fruit, latex, resins, fibers like rattan, and medicinal herbs, according to Sunderland.

But NTFPs are nonetheless important to some rural populations. A recent CIFOR study estimated that forest product generate up to 20 percent of rural income and often provides the only means to access the cash economy. NTFPs can also be an important source of food and nutritional security.

Accordingly, NTFPs can have a role in rural livelihoods, especially as part of multiple-use sustainable forestry projects. But these require “long-term investments and complex co-management approaches”, said Sunderland, who added that more long-term research is needed to fully understand the impacts of NTFP harvesting and use.