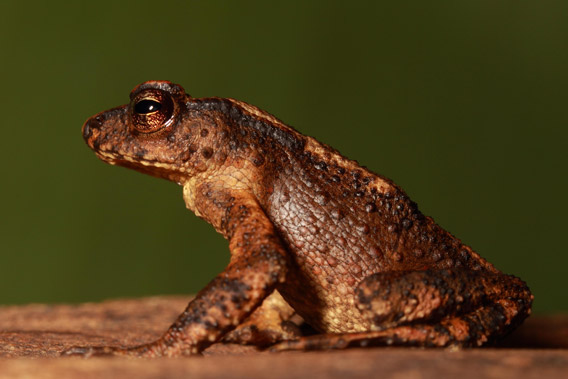 The Kandyan dwarf toad hadn’t been seen for over a century until researchers stumbled on it in 2009. Photo courtesy of: L.J. Mendis Wickramasinghe.

A small toad not seen since 1876, and considered by many to be extinct, has been rediscovered in a stream in Sri Lanka. First recorded in 1872, the Kandyan dwarf toad had (Adenomus kandianus) vanished for over a century before being found by scientists during a survey in 2009 in the Peak Wilderness Sanctuary, according to a new paper in Zootaxa.

“During a nocturnal sampling session, about four specimens of an unusual species were observed, from the Peak Wilderness Sanctuary on the 23rd October 2009, which were sympatric with Adenomus dasi on rocks close to fast flowing streams where a single specimen was collected in order to taxonomically clarify its identity,” lead author L.J. Mendis Wickramasinghe with Herpetological Foundation of Sri Lanka told mongabay.com.

After being collected, however, the individual was found to not be the closely-related Adenomus dasi, but the long lost Kandyan dwarf toad. The genus Adenomus is only found in Sri Lanka and comprises just three species. Although the discovery is worth celebrating, Wickramasinghe cautions that the species is likely close to extinction.

“It’s most likely that this population will be categorized as a Critically Endangered population in future updates of the IUCN Red List of Threatened Species,” Wickramasinghe says.

Wickramasinghe and his team were in the region to survey land-based amphibians because “not much light has been shed on their diversity by scientists, because of the difficulty to reach these sites due to harsh weather conditions and tough trails.”

Wickramasinghe hints that the rediscovery of the Kandyan dwarf toad (Adenomus kandianus) may not be the last of supposed extinct frogs found on the island-nations.

“Although Sri Lanka carries the dubious distinction of contributing the highest proportion (60%), to the global list of extinct amphibians, I must say there are several others that are yet to be updated and will be published in the near future,” he says.