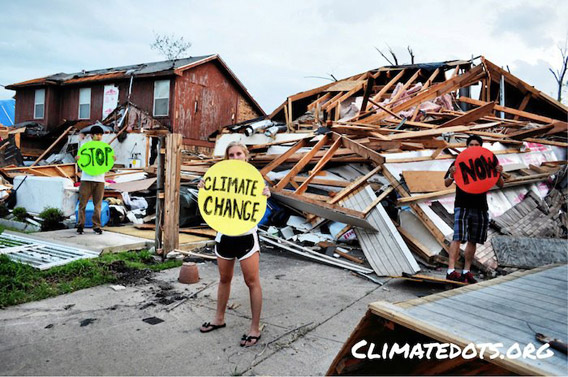 On Saturday, May 5th vulnerable populations from the United States to Bangladesh will “connect the dots” between devastating extreme weather and climate change in a global day of action organized by 350.org. The nearly 1,000 events occurring in over half of the world’s nations are meant to highlight to governments, media, and the public that climate change is impacting lives through an increase in number and intensity of devastating weather events, such as droughts, heatwaves, and floods.

“We just celebrated Earth Day. May 5 is more like Broken Earth Day, a worldwide witness to the destruction global warming is already causing,” said founder of 350.org, Bill McKibben, in a press release. “People everywhere are saying the same thing: our tragedy is not some isolated trauma, it’s part of a pattern.” 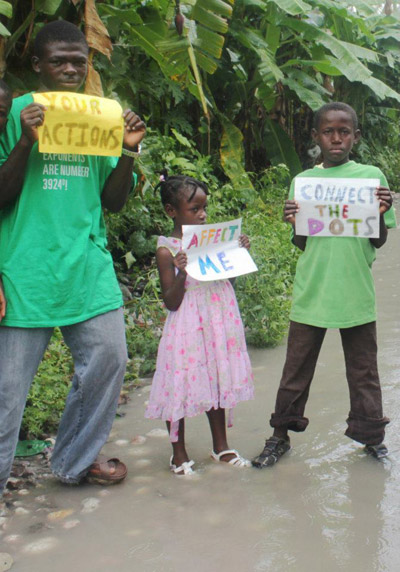 Haiti’s youth stand in flooded streets to connect the dots between climate change and severe floods. Photo courtesy of 350.org.

“Global warming can generally not be proven to cause individual extreme events—but in the sum of events the link to climate change becomes clear. It is not a question of yes or no, but a question of probabilities,” explained lead author, Dim Coumou, with the Potsdam Institute for Climate Impact Research (PIK), in a press release. 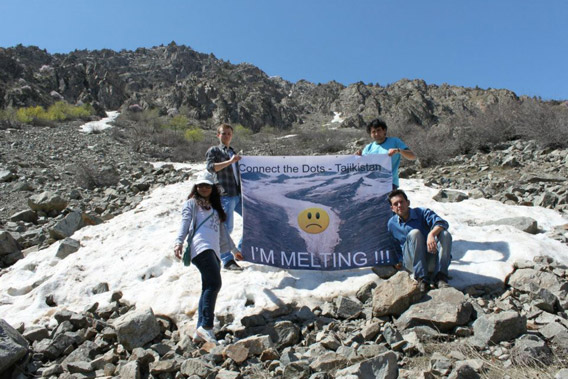 Tajikistan’s water supplies are dwindling as glaciers melt and are not renewed by snowfall as in the past. Photo courtesy of 350.org.

Beyond the science, the rise in extreme weather events brings real human suffering. Last year, the U.S. suffered 12 weather events that caused a billion dollars each, including several that were probably exacerbated by a warmer world. Also in 2011, Thailand experienced its worst flooding on record with total damages exceeding $45 billion according to the World Bank, and South Korea experienced its wettest summer yet with floods killing 69 people in Seoul. But the greatest human toll last year was in East Africa. Failed rains pushed anarchic Somalia into famine, killing between 50,000 and 100,000 people, half of whom were likely children under five. 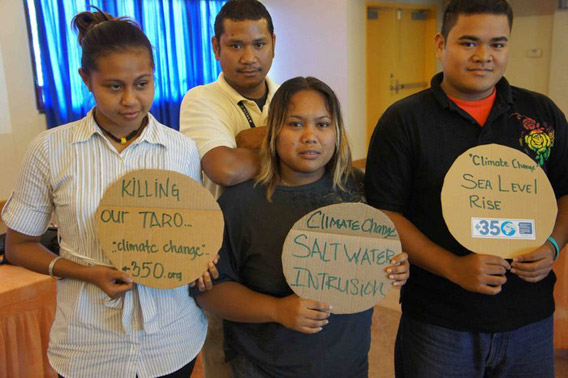 Despite this, world governments have been slow to act on climate change with greenhouse gas emissions continuing to rise year after year. In addition, critics say that many in the media have ignored or obfuscated the issue. In the U.S., at least, coverage has dropped sharply since 2009, the year of the UN Climate Summit in Copenhagen, according to Media Matters. In addition, stories covering the politics of climate change far outnumber those covering the science.

Since the early 20th Century, global temperatures have risen approximately 0.8 degrees Celsius (1.44 degrees Fahrenheit) due to greenhouse gas emissions, which trap heat in the atmosphere. The past decade (2000-2009) was the warmest on record, while 2010 and 2005 are generally considered the warmest years on record (not 1998 as is often cited). In fact, the Earth hasn’t experienced a single year below the 20th Century average since 1975. While governments have pledged to keep global temperatures rising above 2 degrees Celsius (3.6 degrees Fahrenheit), the International Energy Agency warned last month that global society was on track to raise temperatures “at least” 6 degrees Celsius (10.8 degrees Fahrenheit), a rise that scientists warn would cataclysmic for Earth’s ecosystems and human society. 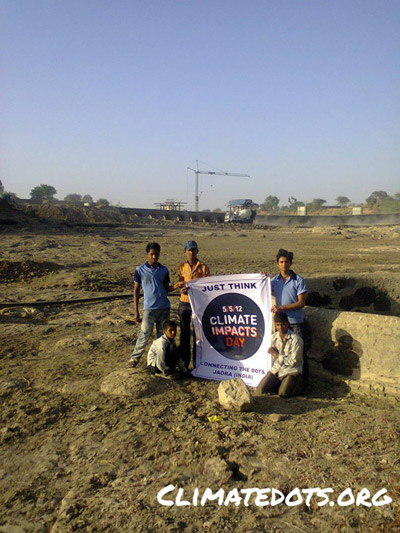 In Jaora, India, key water supplies are running dry during longer and longer periods of drought. Photo courtesy of 350.org.

Tornado season likely to expand due to climate change

(03/06/2012) Last Friday, around a hundred tornadoes left a wake of destruction in the U.S., killing 39 people to date and destroying entire towns. The tragedy hit hardest in Kentucky and Indiana and experts predict the weather-disaster will cost over $1 billion. But isn’t this early for tornado season? Yes, say experts, and climatologists add that while research on tornadoes and climate change is currently in its infancy, it’s possible, probably even likely, that climate change is expanding tornado season in the U.S. due to the earlier arrival of spring.

Earth systems disruption: Does 2011 indicate the “new normal” of climate chaos and conflict?

(12/21/2011) The year 2011 has presented the world with a shocking increase in irregular weather and disasters linked to climate change. Just as the 2007 “big melt” of summer arctic sea ice sent scientists and environmentalists scrambling to re-evaluate the severity of climate change, so have recent events forced major revisions and updates in climate science.

Texas loses half a billion trees to epic drought

(12/21/2011) A punishing drought in Texas has not only damaged crops, killed cattle, and led to widespread fires, but has also killed off a significant portion of the state’s trees: between 100 and 500 million trees have perished to drought stress according to preliminary analysis. The estimate does not include tree mortality caused by fires. The drought has been linked to La Niña conditions, which causes drying in the Southern U.S., and has likely been exacerbated by global climate change.

(11/02/2011) Unprecedented flooding in Thailand, torrential rains pummeling El Salvador, long-term and beyond-extreme drought in Texas, killer snowstorm in the eastern US—and that’s just the last month or so. Extreme weather worldwide appears to be both increasing in frequency and intensity, and a new report from the Intergovernmental Panel on Climate Change (IPCC) connects the dots between wilder weather patterns and global climate change.