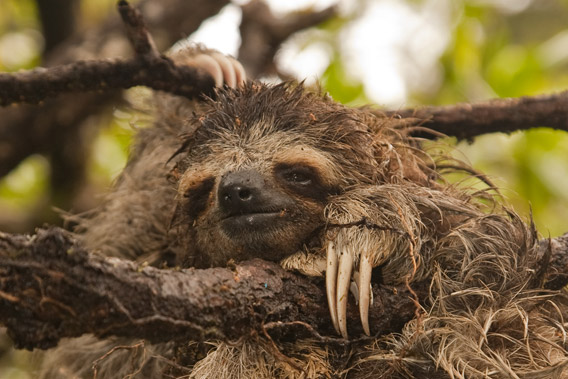 The pygmy three-toed sloth (Bradypus pygmaeus) is one of the world’s most endangered mammals, according to a detailed survey of the population, which found less than 100 sloths hanging on in their island home. Only described by researchers in 2001, the pygmy sloth lives on a single uninhabited island off the coast of Panama. But human impacts, such as deforestation of the island’s mangroves, may be pushing the species to extinction.

“Very little is known about this species,” explains David Curnick with the Zoological Society of London (ZSl). “We’ve collected data for the first time to get an accurate picture of how many pygmy sloths are left in the world.”

In the past, researchers have estimated that between 300-500 sloths survive on the 3.4 square kilometer island, but Curnick along with fellow ZSL researcher Craig Turner found that those numbers were optimistic.

The pygmy three-toed sloth is listed as number 16 in the world’s 100 most unique and imperiled mammals, compiled by ZSL’s EDGE program, which measures animals not on their public appeal, but on a scientific score based on their endangerment status and their evolutionary uniqueness.

As the world’s smallest sloth, pygmy sloths are 40 percent the size of their mainland relatives. They are also the world’s slowest sloth. Having been marooned from mainland Central America for 9,000 years on tiny Escudo Island, the sloths are unusually docile and completely unafraid of humans. As one sloth researcher, Bryson Voirin, told mongabay.com in 2010, “When they see me they have no clue what to think. They must just think I am some big, very strange sloth coming to say hello.”

The sloths stick to the island’s mangrove forests, moving up and down the trees depending on the temperature. Higher up to catch the sun on cool days, and lower down to rest in the shadows.

“The mangrove forests are relatively hard to penetrate, and from a sloth’s perspective they provide protection from aerial predators. We noticed that pygmy sloth mothers carrying young would remain low in trees, which may be an evolutionary hangover for predator evasion,” Turner said. Natural predators of the sloths possibly may include native snakes and raptors targeting the babies. 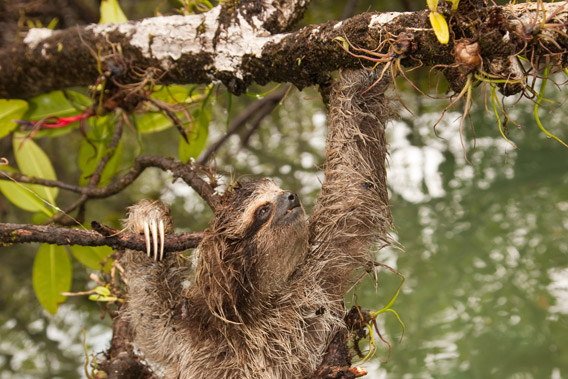 Now that researchers know around how many sloths remain, the next step is to draft a conservation plan, which ZSL is currently raising funds for. There is no consensus as to why the sloths are in decline, but it’s possible tourism, hunting, the deforestation of mangroves, or combination of these is having a disastrous impact. As of 2009, the entirety of Escuda Island was deemed a protected area, but it is also a common stopover for local fishermen who sometimes bring families and even dogs.

While exploring the island, Curnick and Turner found mangrove forests that had been cut down—probably by the local fishermen for charcoal.

“[Reforestation] is an option we hope to explore with the view to potentially develop a local community reforestation pilot project. However, there are areas of cleared mangroves already showing small signs of regeneration so it may be a case of buying them some time to establish themselves,” Curnick told mongabay.com.

As to humans hunting the sloths, Curnick says, “we have no concrete evidence to support this claim,” but that “we hope to evaluate [hunting] further during a complete threat assessment.”

One of the key components to saving the sloths will be building a coalition devoted to the species long-term survival.

“I would like to see better engagement with the local communities and stakeholders and the development of local environmental management plan. This is a process we have already started and hope to develop this aspect of the project over the remainder of this year. We are also seeking funding to support a local Panamanian conservationist to take this, and other areas forward, through the EDGE Fellowship program,” explains Curnick.

One last-ditch option would be removing some sloths from the island for captive breeding. But Curnick warns this could prove difficult and risky.

“As a family, three-toed sloths are notoriously hard to keep in captivity let alone breed and I imagine the pygmy sloths will only be more difficult,” he says. “There are a couple of institutions interested in exploring this further but, as it stands, we know so little about their underlying ecology and biology that it isn’t an option in the short term.”

The three-toed pygmy sloth is not the only imperiled biological wonder of Escuda Island. The island is also home to its own species of bat and salamander: the neotropical fruit bat (Artibeus incomitatus) and the maritime worm salamander (Oedipina maritima), which is number 74 in the EDGE Top 100 Amphibian’s list. Like the pygmy sloth, both of these species are listed as Critically Endangered.

“We only had a limited period on the island and had to focus much of this on sloth and mangrove surveys. We did have time to conduct a number of bat surveys but, although we found four species, none of these were the endemic. In terms of the salamander, we didn’t have time to survey this time around but I would say it would be like looking for a needle in a haystack as they live in the jungle leaf litter,” says Curnick. “We are exploring options with Panamanian collaborators to conduct a wider ecological assessment of the island which would include these and other species.”

The maritime worm salamander (Oedipina maritima) is number 74 in the EDGE Top 100 Amphibian’s list. The species is only known from eight individuals. 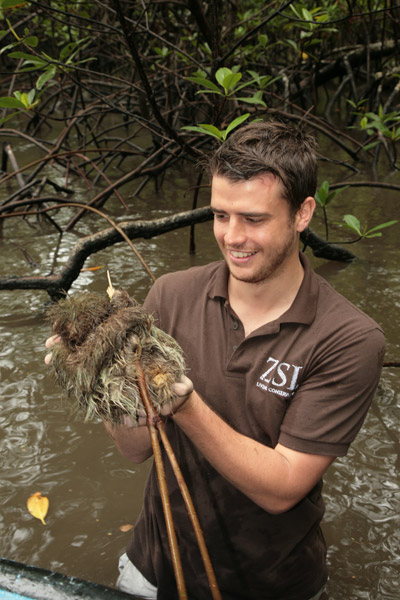 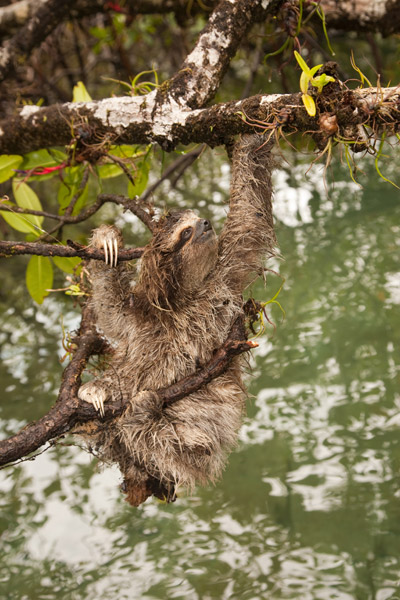 The faster, fiercer, and always surprising sloth, an interview with Bryson Voirin

(10/25/2009) Sloths sleep all day; they are always slow; and they are gentle animals. These are just some of the popular misconceptions that sloth-scientist and expert tree-climber, Bryson Voirin, is overturning. After growing up among the wild creatures of Florida, spending his high school years in Germany, and earning a Bachelors degree in biology and environment at the New College of Florida, Voirin found his calling. At the New College of Florida, Voirin “met Meg Lowman, the famous canopy pioneer who invented many of the tree climbing techniques everyone uses today.”