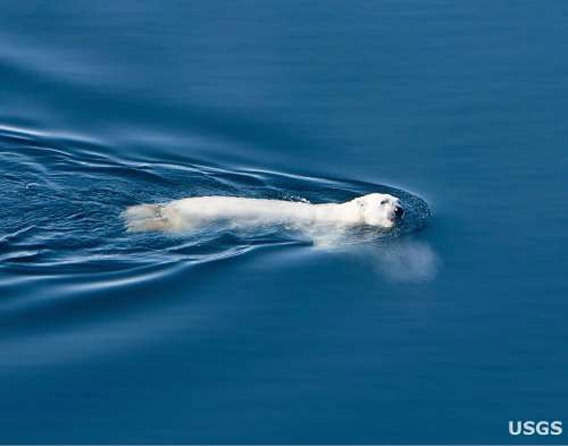 Polar bears (Ursus maritimus) are capable of swimming incredible distances, according to a new study published in Zoology, which recorded polar bears regularly swimming over 30 miles (48 kilometers) and, in one case, as far as 220 miles (354 kilometers). The researchers believe the ability of polar bears to tackle such long-distance swims may help them survive as seasonal sea ice vanishes due to climate change.

“Summer sea ice conditions in the southern Beaufort Sea have changed considerably over the last 20 to 30 years, such that there is much more open water during summer and fall. Historically, there had not been enough open water for polar bears in this region to swim the long distances we observed in these recent summers of extreme sea ice retreat,” explains co-author Karen Oakley, of the USGS Alaska Science Center .

Oakley and other scientists with the United States Geological Survey (USGS) used GPS collars to track 52 female bears from 2004 and 2009 recording 50 swims with an average of 96 miles (154 kilometers). The scientists even found evidence that cubs may be able to survive such swims as well. Out of ten observed polar bears with cubs, the scientists were able to find that six of them still had their cubs a year later.

“For the other four females with cubs, we don’t know if they lost their cubs before, during, or at some point after their long swims,” explains lead author Anthony Pagano.

While the study confirms it is possible for polar bears to undertake swimming odysseys, it does not address how much energy bears are expending during such swims—a question that is likely key to their long-term survival. If the bears expend excessive calories in epic swims, they may simply starve.
Since, during ice-free seasons, the bears must go without food, shedding up to two pounds a day.

A 2010 study in Nature predicted that if greenhouse gas emissions are significantly reduced in the next two decades, enough ice would remain to keep polar bears from extinction. On the other hand, if emissions continue to rise the polar bear will be at considerable risk. Already seasonal ice has been retreating faster than many scientists predicted and could vanish entirely in the next few decades.

The Arctic is on the front-lines of climate change, since temperatures there have risen twice as first as the global average.

The truth about polar bears and climate change

(06/21/2011) Although scientists say innumerable species are threatened by climate change, polar bears have been the global symbol of the movement to rein-in greenhouse gas emissions. This is perhaps not surprising, since polar bears are well known to the public—even though they inhabit a region largely absent of humans—and they make a big impression. Their glaringly white coat contrasts with their deadly skills: as the world’s biggest terrestrial predators, they are capable of killing a seal with single blow. When young they are ridiculously adorable, but when adults they are stunning behemoths. But that’s not all. Unlike many other species, the perils of climate change are also easy to visualize in connection with polar bears: their habitat is literally melting away.

Ringed and bearded seals to be listed as Threatened

(12/29/2010) The National Oceanic and Atmospheric Administration has proposed listing bearded and ringed seals as threatened under the Endangered Species Act. NOAA highlights the disappearance of arctic sea ice and reduced snow cover as the major threats to the species.